Posted on November 12, 2017 by Wedgwood in Seattle History

As I participated in the Wedgwood School PTA, I drew upon my background of having grown up in the Wedgwood neighborhood in northeast Seattle.  The PTA projects of that 1991-1992 school year led to the local history writings which I have continued to do up to the present day.

Drawing upon my roots in Wedgwood 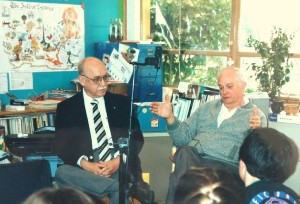 In 1992 retired businessmen Grant McVicar and Russ Evans came to school to tell students about their experiences in the neighborhood.

As a Wedgwood PTA mom in the 1991-1992 school year, I (Valarie) got involved in a project to bring local history into the classrooms.

For the local-history emphasis, students at Wedgwood School wrote about their own family backgrounds and how they came to live in Wedgwood.  They interviewed longtime local residents and asked questions about life in the neighborhood in the 1950s and 1960s.  Students were introduced to Wedgwood businessmen and community activists who came in to speak in the classrooms. 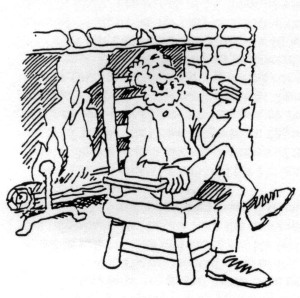 Mr. Thorpe, the ginseng farmer, as depicted in a cartoon by Bob Cram for the Wedgwood Community Council newsletter of May 1995.

Dorothy Brancato, then-editor of the Wedgwood Community Council newsletter, heard about our school project and wanted me to write articles about the history of the neighborhood, to be published in the newsletter.  With Dorothy’s gentle coaxing and encouragement, I began to write, and my first article in the paper newsletter of the Wedgwood Community Council appeared in the May 1992 edition.  In that era before the use of photos in the newsletter, Dorothy arranged for each of my articles to be illustrated with a cartoon by Wedgwood resident Bob Cram.

In 2012 I was still writing for the Wedgwood community newsletter when the decision was made to end the paper newsletters and transition to all-on-line website and social-media.  At that time I started Wedgwood in Seattle History as my personal blog for Wedgwood history articles.  I began by updating and reformatting some of my previously-written neighborhood history articles which had been published in the paper newsletters from 1992 to 2012, and I posted those articles on this blog.

Since 2012 I have continued to do more research and writing about the Wedgwood neighborhood.  Then I took the Meadowbrook material which I had written in the 1990s and posted those articles here on this blog.  That was the beginning of expanding Wedgwood in Seattle History to include articles about other neighborhoods of northeast Seattle.

Expanding this blog to include other northeast Seattle neighborhood history

According to the page-view statistics for this blog, some of the most frequent subject inquiries on Wedgwood in Seattle History are for information about Wedgwood Rock (I have written six articles about the Rock) and about how and when Wedgwood became part of the City of Seattle.

The golf course at the Sand Point Country Club has views to the northeast toward Lake Washington. Searches for info about the golf course are among the most-frequent inquiries on this blog.

It is interesting to note that this blog also has high page-view statistics for articles about the origins of other neighborhoods in northeast Seattle, such as Hawthorne Hills, Inverness, Laurelhurst, LaVilla, Matthews Beach, Pontiac, the Sand Point Country Club and Golf Course, and the old village of Yesler.

Other often-viewed articles on this blog are about the origins of the Picardo Farm P-Patch, the Burke-Gilman Trail and about John Thornton for whom the Thornton Creek watershed was named.

The number-one most-read article on Wedgwood in Seattle History is a general outline of how the City of Seattle was founded, with an explanation of Seattle’s downtown street names.    I have also written an article about street names outside of downtown Seattle, as to how the streets were named. 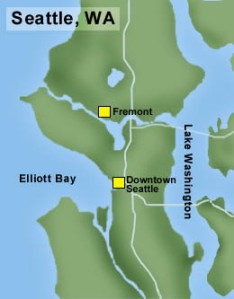 The next thing that happened over the years since starting this blog in 2012, is that I began writing about the history of the Fremont neighborhood of Seattle.

Seattle grows out into Fremont in 1888

The Fremont neighborhood is located at the northwest corner of Lake Union, about four miles straight north of downtown Seattle.   It was the homestead claim of William A. Strickler in 1854, but was never developed.  Due to long-running legal problems about the ownership of Strickler’s land claim, no one lived on the property until the case was resolved in 1887.

The neighborhood was named by investors Edward and Carrie Blewett who came out from Fremont, Nebraska, in 1888.  Mr. and Mrs. Blewett only came to invest and not to stay.  They left the development of Fremont in the hands of their real estate partners in Seattle.

Fremont in Seattle has a vibrant business district with scenic views along the ship canal and the Burke-Gilman Trail.  This photo was taken while standing on the Fremont Bridge, viewing the Aurora Bridge to the northeast.

In 1888-1889 Fremont began to be populated with its first homes and businesses.  Industries which were established in Fremont’s first year of existence included a lumber mill, a construction materials company and an iron foundry.   It was fortuitous timing.

Less than one year after the establishment of residences and industries in Fremont, a major fire on June 6, 1889, destroyed most of Seattle’s downtown commercial core.  The industries of Fremont were up and running by that time and were ready to produce materials for rebuilding the city.

The Great Fire of June 6, 1889 in downtown Seattle caused industries and residential development to be pushed out to the edges of what was then the settled areas of the city.  After the Fire in downtown, Fremont exploded with even more residential housing, and its industries grew and prospered.

Fremont’s active citizens sought the benefits of city services and so, Fremont was absorbed into the City of Seattle boundaries in 1891.  In the 1890s Fremont activists served on Seattle City Council and they promoted the proposed route of a ship canal which would go past Fremont and enhance the business environment.  The legacy of activism still characterizes the Fremont neighborhood of today.

Writing from Wedgwood to Fremont

My personal writing journey began in my growing-up years of the 1950s and 1960s when I listened to elderly relatives tell stories of their lives.  In the sixth grade in the 1963-1964 school year, my teacher encouraged me to write down these stories.  During that school year we lived through the assassination of President John F. Kennedy and I began to understand how seemingly far-away events could affect us on a personal level.

The Fremont Bridge marks entry to the neighborhood known as the Center of the Universe.

That was the beginning of my interest in setting life stories within the context of historical events.  That is why, when I chose a name for this blog, I called it Wedgwood in Seattle History.  The need to know the background of the history of our city, has caused me to continue to do research and expand my understanding of historic events.

Social, cultural and economic forces set the stage for why the City of Seattle developed as it did, and why and how Seattle neighborhoods differ from one another.  The story of the Fremont neighborhood is in great contrast with Wedgwood and it helps to explain the different factors which shaped the growth of Seattle.  In the past few years as I have written articles about the history of Fremont in Seattle, I simply added a Fremont category here on this Wedgwood blog.

My Wedgwood neighborhood history writing has progressed from the first community newsletter articles which I wrote on a typewriter in 1992, to today’s convenient on-line blog format.  One of the best aspects of blogging is being able to share widely with anyone who is interested in the subject of Seattle history.  I follow several other Seattle blogs here on WordPress, and I greatly enjoy all the photos and blog posts about the city that I love.

I want to thank all of my blog readers who have followed Wedgwood in Seattle History since 2012.  I hope you will continue to follow the adventures in Seattle history here on my blog.

The Fourth of July, 2017, was the hundredth birthday of the Fremont Bridge.  The Waiting for the Interurban statue was decorated for the occasion. The statue is at the corner of Fremont Avenue and North 34th Street, just north of the Fremont Bridge. The “Interurban” was a train line which once ran from Pioneer Square in Seattle to Everett.

6 Responses to Blogging in Seattle History