Posted on November 1, 2013 by Wedgwood in Seattle History 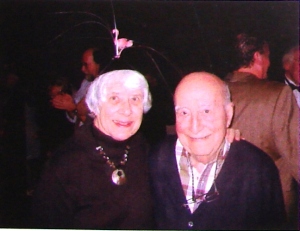 During their retirement years Frank and Dorothy Brancato founded the Wedgwood Community Council.

On October 19, 2013, friends and family gathered to celebrate the life of Dorothy Brancato who resided in the Wedgwood neighborhood for more than fifty years. Dorothy gave gifts of unique investment in the lives of all those she touched.  She was an artist, seamstress, department store display specialist, gardening enthusiast, wife, mother, church member, community activist and encourager.

During their retirement years Dorothy and her husband Frank never slowed down.  They founded the Wedgwood Community Council in March 1987, one of the first community councils to be formed under the then-new Department of Neighborhoods, City of Seattle.

Note to readers:  text and photos in this article are protected under a Creative Commons copyright.  Do not copy without permission.

How Frank and Dorothy met 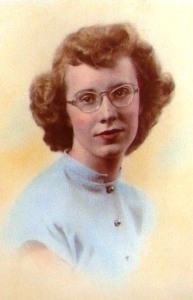 In 1952 Dorothy, age 25, worked as a display artist at the Empire Department Store in Pullman, WA, where she formed a life-long friendship with Bobby and Donna Olson.

Dorothy and Donna had met while working at the store and Dorothy moved into the same apartment building with the Olsons.  On most evenings the three ate dinner together, with Dorothy bringing her own food to the Olson’s apartment and enough to share.

In the summer of 1953 Dorothy, the Olsons, and one other man travelled by car to a conference in California.  On the way back to Washington State they took on one more rider, Dr. Frank Brancato, PhD, a microbiologist who worked for the US Public Health Service in Seattle.

Donna and Bobby Olson were lifelong friends with the Brancatos.

During the trip back to Washington State, Bobby Olson and the other man sat in front and took turns driving, while Donna, Dorothy, and Frank sat in the back.  At the end of the long drive Frank confided to Donna Olson that he thought he had found his true love in Dorothy.

Within the next couple of weeks, Frank showed up uninvited in Pullman to visit Dorothy, and of course he joined in at dinner as per custom in the Olsons’ apartment. Dorothy was happy with her busy life as a single girl, but Frank was persistent and finally they were married in 1955.

The Brancato family circa 1960.  Used by permission; do not copy.

At Dorothy’s memorial service on October 19, 2013, the Brancatos’ two children, Ted and Mary Sue, shared that throughout her life Dorothy had battled physical challenges, including more than one bout with cancer, but she rose above it to inspire friends and family.

Dorothy wanted Ted and Mary Sue to have fun childhoods but also to learn achievement.  Along with family parties and outings, Dorothy encouraged the children to learn to play musical instruments and be involved in other worthwhile activities such as Boy Scouts and Camp Fire Girls.

Dorothy was concerned about everyone, and she expressed her Christian commitment through care of the needy.  She was very involved in outreach to the homeless, including University Emergency Fund. Characteristically, Dorothy organized a tea party as a benefit for the work with the homeless. When a house owned by Faith Lutheran Church was designated for use by a homeless family, Dorothy was not satisfied that it would be just a house.  She made sure the house had curtains, welcoming flower arrangements, a fully-stocked kitchen and the refrigerator filled with food.

The birth of the Wedgwood Community Council

Dorothy expressed concern for her community by co-founding the Wedgwood Community Council with her husband Frank in 1987.  The old community club had gone dead in the early 1970s, and from that time until the Brancatos got something going, there was no community representation.

Dorothy Brancato began producing a newsletter for the newly founded Wedgwood Community Council. This is the front page of the first edition in August 1987.

Dorothy wanted Wedgwood to have an outlet for issues and influence with city departments, so she recruited from her wide network of neighborhood contacts to door-drop meeting notices and start organizing.  Frank served as the first community council president.  The Brancatos helped write the bylaws and find people to chair committees.

Dorothy then started a newsletter to help the neighborhood know what was going on.  The first newsletters invited people to come to organizing meetings, become active and bring their concerns for zoning, business district development, safety, traffic and communication with city officials.  Dorothy was editor for the newsletter’s first ten years, retiring from the task in 1997 at age 70.

Dorothy mentored me to begin writing about Wedgwood history

In the beginning years of writing about Wedgwood and Meadowbrook history Valarie interviewed elderly neighborhood residents. Interviewed in 1993, Edith Fischer narrated her eyewitness account of an event which had occurred in 1902!

In 1991-92 when I (Valarie) was the mother of a kindergartener at Wedgwood Elementary School, I became involved in a PTA project to bring local history into the classrooms. Dorothy Brancato heard of the project and began coaxing me to write up neighborhood history stories to be published in the Wedgwood Community Newsletter.  I wasn’t sure how to begin, but Dorothy sent me here and there to people whom she knew, so that I could interview them and record the stories of early years in Wedgwood.

That is how the Wedgwood history project began, and many neighborhood stories were preserved because of Dorothy’s network of contacts, her gentle persistence and unfailing encouragement to me.  My first articles written for Dorothy were typed on a typewriter, because I didn’t even own a computer then. Today, all the material I have written since 1992 is up on this blog, and Dorothy’s never-quit legacy spurs me on.

During the Hanukkah Eve Wind Storm of December 14 and 15, 2006, a tree fell on Frank and Dorothy’s Wedgwood house, cutting it in half. Fortunately the Brancatos were not injured, but it was necessary for them to evacuate. They went to stay with their daughter Mary Sue and her husband Ed in Sequim, Washington. The Brancatos had five wonderful years there before Frank died in September 2011 just after his 96th birthday.  Dorothy developed more health challenges but she remained comfortable at the home of Mary Sue and Ed until her death at age 85 in July 2013. 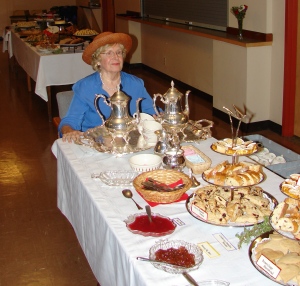 Throughout her life Dorothy remained true to her artistic beginnings and she particularly loved tea parties as expressions of food, flowers and fun.  Her memorial service on October 19, 2013, at Faith Lutheran Church, 8208 18th Ave NE, was designed as a tea party with hat-wearing participants, flower arrangements, decorations, tea, punch, sandwiches and cookies.  A good time was had by all as we basked in the glow of a life well-lived, and in the legacy of Dorothy Brancato which lives on.

Valarie is a volunteer writer of neighborhood history in Seattle.
View all posts by Wedgwood in Seattle History →
This entry was posted in community council (present time) and tagged community activist, neighborhood organizing, Seattle. Bookmark the permalink.