The Birth of the Wedgwood Community Council

Posted on November 15, 2013 by Wedgwood in Seattle History

The Brancato newlyweds in 1955.

In 1955 newlyweds Frank and Dorothy Brancato moved to the Wedgwood neighborhood in northeast Seattle, beginning decades of service in local schools, church and community work. In the 1980s when the Brancato children were grown and Frank was retired from his employment, the couple turned their attention to Wedgwood’s development issues.  Frank and Dorothy’s organizing efforts strengthened the ability of the community to have input with city government.

In the 1950s and 1960s Wedgwood had a community club but interest and involvement waned until the club stopped meeting in the early 1970s. Neighborhood activism may have declined because of the Boeing Bust of the 1970s when there was a regional economic slump due to massive lay-offs at Boeing.  Then, too, by the 1970s the Wedgwood neighborhood was mostly filled in with houses and the business district seemed complete, so there were fewer development issues to attract attention.  Another possible reason for the death of the community club was the long-running, rancorous fight over a development called Shearwater.

By the 1980s Dorothy Brancato was becoming concerned about “skinny houses” which were going in where rezoning had allowed developers to divide lots in Wedgwood and squeeze in another house.  Dorothy was alarmed about the cutting of trees to make way for greater housing density and the overall impact of density upon the quality of life in Wedgwood.  She found, however, that there was no one to talk to about these issues because in the early 1980s there was no community group in Wedgwood which represented the neighborhood.

In the 1970s Mayor Uhlman of Seattle wanted to create decentralized service centers where people out in the neighborhoods could pay their City Light bill and receive general assistance with community problems.  A Wedgwood resident, Virginia Galle, was working at the downtown Citizens Service Bureau and she was put in charge of setting up five neighborhood service centers.  In May 1972 these were set up in Ballard, University District, West Seattle, Southeast Seattle and White Center. The centers were so successful that over time more were added and they became the Little City Hall Community Service Centers of today.

One of the most helpful and effective service managers was Yolanda Martinez of the Lake City Service Center, and in the mid-1980s the program, originally set up by Virginia Galle, turned back to benefit Wedgwood directly, when Dorothy Brancato went to see Yolanda Martinez to ask how to give Wedgwood a voice in community issues.

Yolanda alerted Dorothy to the City of Seattle process which had just begun for neighborhoods to form community councils.  Frank and Dorothy visited the Maple Leaf group which was one of the first.  Yolanda gave guidance to the Brancatos so that by 1987 the Brancatos were ready to get organized in Wedgwood.

After some early informational meetings, the Wedgwood Community Council was officially created with bylaws on March 6, 1987. Momentum and involvement continued to build in 1988 as Mayor Charles Royer appointed Jim Diers to head the newly created Office of Neighborhoods. Diers was assigned to support the formation of community councils and one of his first speaking engagements in neighborhoods was at the Wedgwood meeting of May 5, 1988. 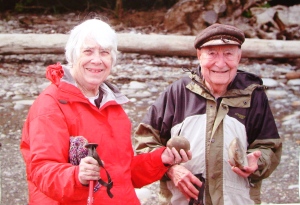 The Brancatos lived in Sequim, Washington, in the later years of their lives.  Photo used by permission.

After ten years of intense involvement in the Wedgwood Community Council Frank and Dorothy Brancato reduced their commitments due to aging, but they continued in some volunteer activities.  Then during the Hanukkah Eve Wind Storm of December 2006 the Brancatos’ house in Wedgwood was cut in half by a falling tree, and they went to live with their daughter and son-in-law in Sequim.

Due to health issues the Brancatos remained in Sequim until their deaths, Frank in September 2011 and Dorothy in July 2013.  The legacy of the Brancatos in community activism lives on in Wedgwood today.

Dorothy Brancato began producing a newsletter for the newly founded Wedgwood Community Council. This is the front page of the first edition in August 1987.

Valarie is a volunteer writer of neighborhood history in Seattle.
View all posts by Wedgwood in Seattle History →
This entry was posted in community council (present time) and tagged Department of Neighborhoods, neighborhood activism, Neighborhood History, neighborhood organizing, Seattle. Bookmark the permalink.