Life and Legacy in Wedgwood in the 1930s: the Hentschell Family

Posted on July 16, 2020 by Wedgwood in Seattle History 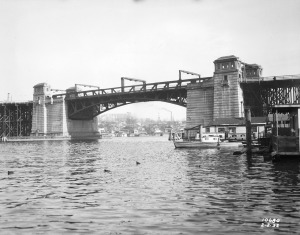 The University Bridge as it looked in February 1932. Photo 5441, Seattle Municipal Archives.

The Wedgwood neighborhood in northeast Seattle was never reached by a streetcar system, and the area remained outside of the City Limits until the 1940s-1950s.

Up until after the end of World War Two in 1945, the (future) Wedgwood area was semi-rural with scattered houses and no commercial district.

Northeast Seattle was hard to reach until after the ship canal was completed in 1917.  After bridges were built across the ship canal, roads extended out northward from there.  It might seem surprising that so many people in northeast Seattle owned cars in the early days of the 1920s-1930s, but they did, and they drove to work.

The University Bridge (built 1919) and the Montlake Bridge (1925) led to population growth in northeast Seattle because people were now able to live farther out in the less expensive northern areas of the city and drive across the bridges to work in downtown Seattle. 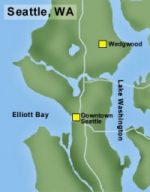 The Hentschell family were among those who moved out to the (future) Wedgwood neighborhood in northeast Seattle in the 1930s, leaving behind the conveniences of the city in order to find an affordable place to live.

The Hentschells became active contributors to the life of the neighborhood in the 1930s and 1940s.  The neighborhood had not yet acquired an identity as “Wedgwood” but among other neighborhood activities, a Catholic parish was in formation.

From Minnesota to Seattle

Isadore J. Hentschell was born in Austria and came to the USA in 1892 at age seven.  He grew up in Minneapolis, Minnesota and as a young man he got a job as an advertising salesman for the Minneapolis Tribune newspaper. 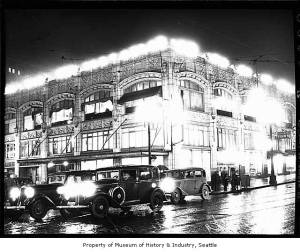 In the 1930s the Seattle Post-Intelligencer newspaper office was in this building (no longer extant) at Sixth & Pine Streets across from the Frederick & Nelson department store.

I.J. Hentschell and his wife Edna had five sons together and lived in Minneapolis until something caused them to make a sudden change in mid-life.

I.J. Hentschell was forty-three years old when he left the Minneapolis Tribune; he had worked there twenty-two years.  He joined the Hearst newspaper empire which brought him to Seattle in 1929.

I.J. flourished as he worked at the Seattle Post-Intelligencer office in downtown Seattle and he was promoted to become manager of the newspaper’s advertising department.

While living at Terrace Street on the hillside above downtown Seattle, a sixth son was born to the Hentschells.

A move to northeast Seattle 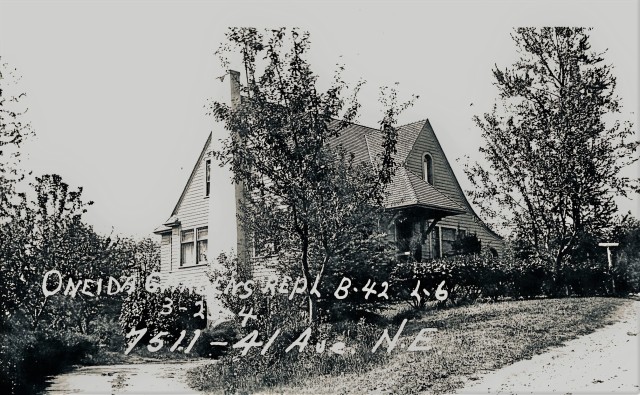 The Hentschell house as it looked in 1938. This photo was taken by the property tax assessor’s office in the first survey of all taxable structures in King County.

The house at 7511 41st Ave NE was ten years old and had been built by Swedish carpenter Eric Hedlund who still lived nearby.  The house was on a large lot where the Hentschell family could plant a vegetable garden.   There were not any grocery stores nearby but the Hedlunds were operating a chicken farm where neighbors could purchase chickens and eggs.

Labor unrest in Seattle in 1936 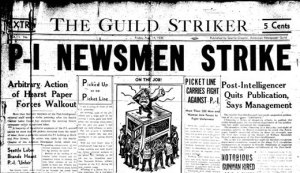 During the strike of the Seattle Post-Intelligencer newspaper in 1936, writers created an alternative newspaper to explain their unionization drive.

During the summer of 1936 Mr. Hentschell may have had more time than usual to spend with his family and help around the house, due to a sudden shutdown of the Seattle Post-Intelligencer newspaper.   From August 19 to November 29, 1936, newspaper writers employed by the PI went on strike because they were trying to organize a union, a move opposed by Hearst, the owner of the newspaper.

At that time the Post-Intelligencer newspaper office was at Sixth & Pine Street across from the downtown Seattle Frederick & Nelson department store.  Striking workers joined by representatives of other unions created a picket line which prevented anyone from entering the newspaper’s building, including PI employees like I.J. Hentschell who was the advertising manager, not a writer.  During that time from August to November 1936, the PI did not print.

Plans for a Catholic university in northeast Seattle 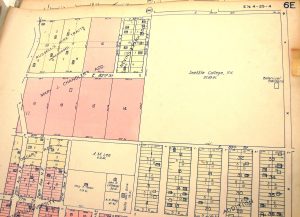 The 1930 Kroll Publishers map showed the Seattle College property from NE 80th to 85th Streets on the west side of 35th Ave NE.

We may wonder why the Hentschells chose a house in remote northeast Seattle in 1936.  Some of the reasons might have been the advantages, mentioned above, of the ability to own a home and be able to drive to work in downtown Seattle.

Another reason for their choice to move to northeast Seattle might have been because the Hentschells, who were Catholics, had heard of the plans to move Seattle University to a site on 35th Ave NE at NE 81st Street.  They knew that the Jesuits of Seattle University had already purchased property at the northeast Seattle site and a Catholic congregation was meeting there. 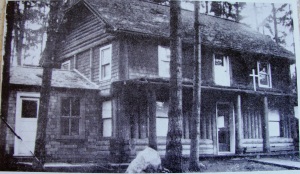 Mr. Thorpe’s log cabin became the Chapel of St. Ignatius in November 1929. Photo courtesy of historical records of Our Lady of the Lake Catholic Church.

In 1929 the Jesuits of Seattle University purchased forty acres of undeveloped land along the west side of 35th Ave NE between NE 80th to 85th Streets.  The former land owner, Mr. Thorpe, had lived in a log house.  Volunteers from the neighborhood modified the house to use as the Chapel of St. Ignatius.

Although it wasn’t exactly a parish, priests from Seattle University would travel out to the site to hold Mass on Sundays.  At the time of the arrival of the Hentschell family in 1936, as many as one hundred people gathered for Mass at the log house.

The site becomes the “original Wedgwood” 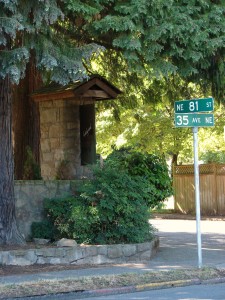 The entrance to Balch’s original Wedgwood houses is marked by this stone gatepost from 35th Ave NE into NE 81st Street, at the same driveway where Mr. Thorpe once had his log house.

The Hentschells might well have anticipated the establishment of Seattle University at the log house site since it was the stated intention of the Jesuits to do so.  However, in 1929 just thirty days after the Jesuits had purchased the land, a stock market crash set off a national economic depression which lasted until the U.S. economy got going again in the 1940s.  The plan to move Seattle University did not go forward in the 1930s due to the financial constraints of the economic depression.

By 1940 the Jesuits had decided not to move the campus of Seattle University, which remains today on First Hill east of downtown Seattle.

The Jesuits sold the log house and its forty acres in northeast Seattle to developer Albert Balch, who became the “father of Wedgwood.”  “Wedgwood” was the plat name chosen by Balch for his new development of houses, and it was so successful that the name spread gradually to become the name of the neighborhood.

Any hopes that the Hentschells might have had to send their sons to a Jesuit college were not realized; however, in the 1940s two of their younger sons attended St. Martins College near Olympia, the capital of Washington State.

The Hentschells did get in on the ground floor of the establishment of a parish for the Catholic families in the Wedgwood neighborhood.  In 1940 a Dominican priest was assigned by the diocese to locate a site for a new church building and form a parish.  This became Our Lady of the Lake Catholic Church at 8900 35th Ave NE.  Both Mr. & Mrs. Hentschell were very involved in service activities at the church. 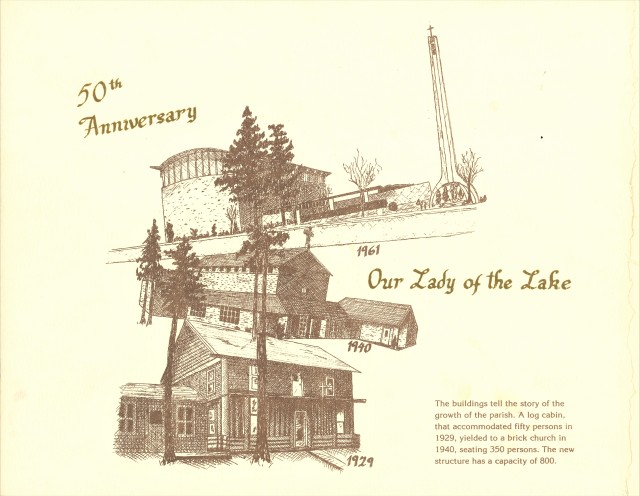 In 1979 the Our Lady of the Lake anniversary book showed the three buildings that the parish had in that time.

The Hentschell family in later years

Sadly Mr. Hentschell did not have many more years to enjoy his life in Wedgwood and his large family.  He died in 1946 at age 61.  At that time the Hentschells already had ten grandchildren.  Edna Hentschell continued to live in her house at 7511 41st Ave NE until 1955.

In 1979 at the Fiftieth Anniversary Celebration at Our Lady of the Lake, all six Hentschell sons were present.  Edna Hentschell died later that year at age 90.  At her death it was listed that she was a member of the Altar Society of Our Lady of the Lake Parish and St. Martin’s Mothers Club.  In addition to her six sons, at the time of her death Edna had nineteen grandchildren, thirty-seven great-grandchildren, and four great-great-grandchildren.

A legacy in Wedgwood 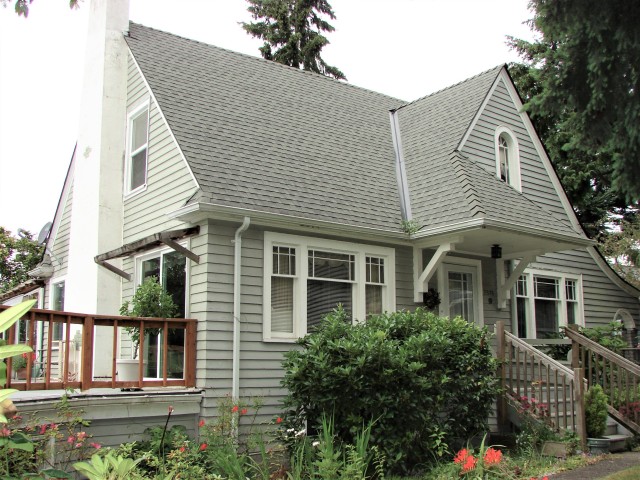 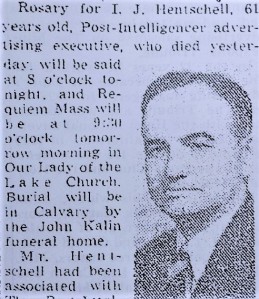 Historical records of Our Lady of the Lake Catholic Church in Seattle, 8900 35th Ave NE.

The Seattle Civil Rights & Labor History Project page has a database of strikes and labor-related events in 1936, a year of intense labor activism.  This webpage, a project of the University of Washington, has many other essays of interest including civil rights and segregation in Seattle.

Side Sewer Card Research:  The card for 7511 41st Ave NE shows that there was a stream which flowed through the yard of the house in a southeasterly direction toward NE 75th Street.  Many of the older homes in Wedgwood were built near underground streams because there were no City utilities as yet, so each house needed to have a well-water source.

Thank you to the Averill family.

Valarie is a volunteer writer of neighborhood history in Seattle.
View all posts by Wedgwood in Seattle History →
This entry was posted in churches, Houses, Immigrant heritage and tagged Neighborhood History, Seattle. Bookmark the permalink.