Immigrants in the Oneida Gardens Plat in Wedgwood

In the 1920s and 1930s the (future) Wedgwood neighborhood in northeast Seattle became the home of numbers of immigrants, most especially from Germany, Holland and Sweden.

The house at 7500 43rd Ave NE in Wedgwood was built in 1910 by German immigrant Gustav Morris.  Photo courtesy of the Puget Sound Regional Archives, Bellevue, WA.

East of 35th Ave NE in what was called the Oneida Gardens blocks, many immigrant settlers worked in building trades such as carpentry and plumbing.  One of the earliest was Gustav Morris, an ethnic German from Latvia, who built a house at 7500 43rd Ave NE in 1910.  Morris worked as a bridge carpenter from 1910 to 1920, during the era when the ship canal and its bridges were under construction.

In the year 1926 Oneida Gardens received an influx of new residents due to the increasing availability of roads, electric & water utilities, and schools in northeast Seattle.  Near Gustav Morris’ house, the block between 41st to 42nd Avenues NE was settled by four Swedish families in 1926.

The text of this article is under a Creative Commons Copyright. If you choose to cite the article then please include the source, and that goes for photos as well.

The golf course officially opened on July 4, 1927.  In 1930 a new clubhouse was built which is the present one, located inside the grounds of the golf course. 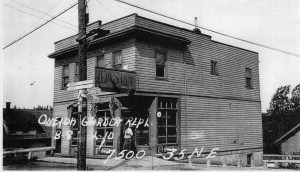 Before it became Ida’s Inn Beer Parlor, this building at 7500 35th Ave NE was a neighborhood grocery store.

The Jacklin family were ethnic Russians from Alaska who came to Seattle in 1916 and built a house at 7528 35th Ave NE.  Mrs. Jacklin had a small grocery store next to their house.  In 1926 the Jacklins built a new store building closer to the corner of 75th, hoping to gain customers from the golf course traffic.

After Prohibition ended in 1934 the Jacklins leased out the building to a young couple, Ray & Ida Ihrig, who turned the store into Ida’s Inn.  Ray was a grandson of German immigrants who moved across the USA until they settled in Seattle in the 1880s, and Ida’s parents were from Finland.

In September 1926 two new brick school buildings opened in northeast Seattle. One was Bryant School at 3311 NE 60th Street.   Maple Leaf, an independent school district outside of the Seattle City Limits, was on NE 100th Street at the corner of 32nd Ave NE.

Each of these school buildings replaced an earlier one which had become too small, as the population of northeast Seattle was growing. These elementary schools went through eighth grade and students could continue on to Roosevelt High School which had opened in 1922.

In 1927 the Seattle School board began opening junior high schools and they purchased the future site of Nathan Eckstein at 3003 NE 75th Street, but Eckstein did not become a reality until 1950.

Forrest Goodwin, age 22, in a 1933 photo with the NE Transportation Company bus. This private bus service was subscribed and operated by the community.

In the summer of 1926 Wedgwood-area neighbors joined together to form a subscription bus line called the NE Transportation Company. The bus ran out north on 35th Ave NE as far as NE 110th Street and was a combination school bus route and housewives shopping connection.

The NE Transportation Company bus route went southward as far as the Ravenna commercial district at 55th & 25th where riders could transfer to another bus line to go downtown.

The ability to get to Ravenna for shopping was a help, because up until 1926 there were no large stores along 35th Ave NE north of NE 55th Street. In that year of 1926, a small grocery and butcher shop, the Morningside Market, opened at 9118 35th Ave NE, the only place to obtain meat in the (future) Wedgwood neighborhood north of Ravenna.

Chickens in the neighborhood 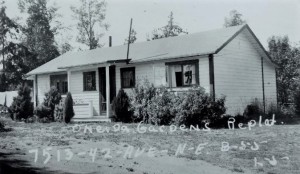 Chickens and eggs were the most available protein sources in the (future) Wedgwood neighborhood as quite a few people raised them for sale.  In 1926 two Swedish immigrants, Carl Johnson and Eric Hedlund, settled at 7513-7519 42nd Ave NE, built houses for their families and built a large chicken house.  Their wives, Ida and Anna, were listed as operators of the poultry business while the men worked in construction trades.

By 1930 Carl Johnson was a truck driver for a lumber company, and Eric Hedlund was a carpenter at the growing site of the naval base at Sand Point on Lake Washington.

This log cabin in Delaware County, Pennsylvania, is believed to be one of the oldest in America, built by or before 1655. Photo courtesy of Swedish Cabin Historical Marker.

Between the years 1638 to 1655, present-day Delaware, southern New Jersey, and eastern Pennsylvania were part of Sweden’s New World Empire. It is believed that this colony of New Sweden in the Delaware Valley is the source of what became the American pioneer tradition of the log cabin. Historians of the colony say that log-house-building was specifically a Swedish skill, adopted by others who came to America later.

In the early 1900s in the Wedgwood neighborhood in Seattle there were a couple of log houses.  One was built by a Swedish immigrant, John Blomquist, who lived at the present site of Nathan Eckstein Middle School. 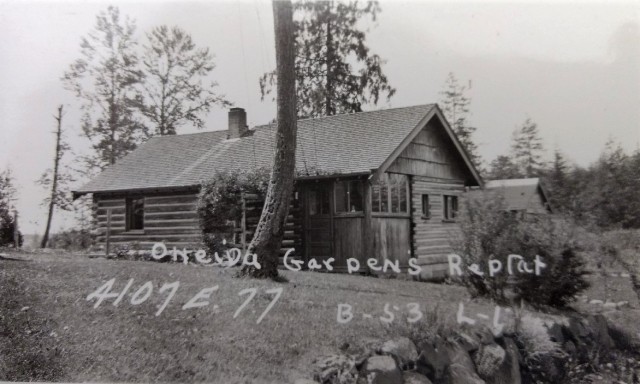 The log house at 4107 NE 77th Street, photo by the property tax assessor for the survey of 1938.  The last owners of this house, which lasted until 1982, observed that this is the back of the house!  Continue reading below for a photo of the front side of the house.

In 1926 two more families with Swedish roots settled just to the north of the Johnsons & Hedlunds.  On NE 77th Street between 41st to 42nd Avenues NE, the Andrus & Farr families built one log house and one “regular” house.  Merton W. Andrus was a plumber who lived in the log house with his wife Ruth Farr Andrus and two young sons. Next door was Ruth’s brother Willis S. Farr, a carpenter, Farr’s wife Catherine and their three children.

In later years – the present-day houses on the block

The former chicken house site at 7513 42nd Ave NE was transformed over the years into a 1960s house.  That one was torn down in 2015 to build what I call a “third wave” house in Wedgwood, pictured at right.

Many Wedgwood house sites started with a 1920s house, were replaced by a mid-century house, and now in turn new styles are being built.  Often the new houses are two-stories to maximize the living space of the house.

The log house at the southeast corner of NE 77th & 41st Ave NE had an unusually long life for an old house.  Later in the 1970s it was purchased by the Augustavo family who planned to eventually build a new house there.  In the interim, one of their newly married sons lived in the log house 1979 to 1982.

Photo of the log house courtesy of the Augustavo family, who owned it until 1982. This is the south-facing side of the house which was the front side.

Finally, in 1982 the Augustavos sold the log house to someone who had it moved, and the Augustavos contracted with an architect, John Gresseth, who had an office in Wedgwood at that time, to build the new house.  Pictured below is the house built in 1983 with address 7550 41st Ave NE, on the south side of NE 77th Street across from Decatur School.

Tracing the original families on the block:

In the 1930s the Andrus family, the original log house occupants, moved a couple of times.  By 1935 they were living in a larger house on South Othello Street where they had moved in with Ruth’s parents.  As of 1940 Merton Andrus was working as a pipefitter at the Navy yard on the waterfront of downtown Seattle. 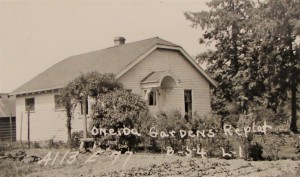 The Willis Farr house at 4113 NE 77th Street was next door/to the east of the Andrus’ log house. Now there is another house, built in 1986, on the site.

The Andrus’ former neighbors, Ruth’s brother Willis Farr and his family, stayed in Oneida Gardens/Wedgwood longer, and it may be that as a carpenter Mr. Farr found plenty of work in northeast Seattle.

As shown on the census of 1940, the Farr family were still living in the house at 4113 NE 77th Street next to the log house.  Now there is a house built in 1986 on the former site of the Farr house.

The Puget Sound Regional Archives, repository of the property records of King County, is located on the campus of Bellevue College.

Many, many thanks to the readers of the Facebook page “You Know You Are From Wedgwood IF…” who have given me so many tips and ideas for my blog articles.

Special thanks to JKO who remembered the location of the log house; I then was able to find the property record.  I went to the Puget Sound Regional Archives and got the photos on March 4, 2020, my last visit there before the coronavirus pandemic caused the closure of all archives and other research resources such as the library, as of March 13, 2020.

Many thanks to the Augustavo family who filled in details of the log house and how they built a new house, 7550 41st Ave NE, on the site in 1983.

Other research resources:  city directories accessed at Seattle Public Library; on-line resources include the census and newspaper search accessed through the library website.

Valarie is a volunteer writer of neighborhood history in Seattle.
View all posts by Wedgwood in Seattle History →
This entry was posted in Houses, Immigrant heritage and tagged Neighborhood History, Seattle. Bookmark the permalink.

5 Responses to Immigrants in the Oneida Gardens Plat in Wedgwood