What about the “E” in Wedgwood?

Posted on July 23, 2012 by Wedgwood in Seattle History 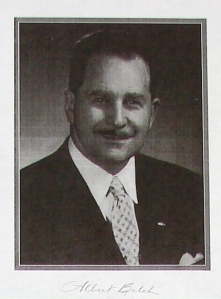 The Wedgwood neighborhood in Seattle took its name from a real estate development which was started in 1941 by Albert Balch.  The naming happened gradually after Balch’s Wedgwood group of houses became well-known.

In an April 1956 interview for the Wedgwood Echo, the community club newspaper, Balch told the story of how the name “Wedgwood” came to be.  Balch and his business partner, Ralph Jones, had previously named and built houses in View Ridge, a neighborhood centered around NE 70th Street on the slope east of 35th Ave NE, looking toward Lake Washington.  Balch’s wife Edith hadn’t liked the name View Ridge, so Balch told her she could choose the name of the next project.

Copyright notice:  text and photos in this article are protected under a Creative Commons Copyright.  Do not copy without permission.

On July 31, 1941 Balch filed a plat with King County (a map of the Wedgwood Addition) and began building houses in a forty-acre section of land which was heavily treed and had never been developed.  The site was a five-block square on the west side of 35th Ave NE from NE 80th to 85th Streets, 30th to 35th Avenues NE.  When Balch purchased the acreage it still had a log house on it.  That log house had been the residence of Mr. Thorpe, a ginseng farmer, and later was used as a Catholic chapel.

Josiah Wedgwood is called “The Father of English Potters” for his company founded in 1759.    Image courtesy of the Wedgwood Museum Trust.

For this new plat to be developed with houses, Edith Balch chose the name “Wedgwood.”  The name was in honor of English potterymaker Josiah Wedgwood, whose work Edith greatly admired, and was also a reference to the wooded nature of the new housing area.

Albert Balch traced his family ancestry from England and he likely was pleased with Edith’s choice of a name referencing his heritage, as the Wedgwood company still operates in England today.  The Wedgwood dinnerware company is known for fine craftsmanship, a value held by Balch as well, as he intended to build good-quality homes.

Balch had asked his architects, Harlan Thomas and Clyde Grainger, to design the Wedgwood development in Cape Cod and Colonial styles which harkened to England and to the New England villages of the early American era.  The name “Wedgwood” with its British connections was suitable to convey the quality and character of the homes Balch was building.  Balch set up ornamental gateposts at the entrance to the new Wedgwood to give the sense of entering an estate.

Wedgwood business ads in the August 1955 edition of the community newsletter, the Echo

The phone book listing of 1945 shows the first listing of “Wedgwood Tavern” which had previously been called Hansen’s.    Mr. Hansen  built the storefront building at 8507 35th Ave NE, adjoining and enclosing the tavern, right after World War Two.  The present-day tavern is called the Wedgwood Ale House.

Many of the other new businesses which moved into the Hansen’s building in the period 1946 to 1948 called themselves “Wedgwood,” including a deli, a pharmacy, and a radio & appliance store.  The exception was McVicar & Son Hardware, which was the first new business to move into Mr. Hansen’s new building in 1946, next-door to the previously-existing tavern.

Wedgwood business ads in the March 1956 edition of the community newsletter, the Echo

In the 1940s and 1950s other local businesses began to change their names to “Wedgwood” as Hansen’s Tavern had done.  Foster’s plant nursery at 7744 35th Ave NE became Wedgwood Gardens.  The original 1946 sales building at the plant nursery site is now used by Hunter Tree Farm.

The Morningside Presbyterian Church which had been at the corner of NE 95th Street (present site of Northeast Veterinary, 9505 35th Ave NE) renamed themselves Wedgwood Presbyterian in anticipation of the church’s move to their new building at 8008 35th Ave NE in 1951.

In 1953-55 a new school was built on NE 85th Street at the corner of 30th Ave NE and was named Wedgwood School. The official naming of the school came on April 16, 1954, while the school was still all in portables and the building was under construction.  The naming shows that by that time, “Wedgwood” was prevalent and had been accepted as the name of the neighborhood.

Balch’s first Wedgwood development was very successful (the first plat was on the west side of 35th Ave NE from NE 80th to 85th Streets).  Vast tracts of undeveloped land were still available nearby and Balch began to build more houses, re-using the Wedgwood name with some variations such as Wedgwood Park and Wedgwood #2, #3, #4, #5.  Balch was part of the home-building boom following the end of World War Two in 1945, when servicemen returned to the USA and wanted to buy houses.  This blog, Wedgwood in Seattle History, contains a series of articles about how Balch came to be the “father of Wedgwood.”

The Wedgewood Estates Apartments at 3716 NE 75th Street is one of the few businesses in the neighborhood which still uses the extra “e” in the spelling of their name.

Wedgwood’s neighborhood identity continued to develop in the 1940s and 1950s.  In 1956 the Wedgwood Community Club was asked to define “Wedgwood,” and the club established its boundaries from NE 75th to 95th Streets.  One of the reasons for choosing these streets as the unoffficial definition of the neighborhood, was that these were the Wedgwood School attendance boundaries at that time.  Once the new Wedgwood School was opened and named, it seemed to solidify the identity of the neighborhood.

In the business community two streams of thought diverged on how to spell the neighborhood name:  should it be spelled Wedgwood or Wedgewood?  It seemed that Albert Balch’s own real estate people were unsure about the spelling of “Wedgwood,” as newspaper advertisements appeared variously with either spelling.

Wedgwood Echo newspaper of October 21, 1955, announced the opening of the new pharmacy.

In 1952 Bud Gagnon’s Wedgewood Pharmacy started at 8501 35th Ave NE (south corner of the block in the Hansen’s building next to McVicar Hardware.)  Three years later Mr. Gagnon built a new, larger store on the north corner of the block at NE 86th Street.  In 1972 the pharmacy was torn down to build the brick bank building presently occupied by Wells Fargo.

The Oneida Gardens apartment complex at 3716 NE 75th Street, built in 1948, changed its name to WedgEwood Estates in the mid-1980s, one of the few businesses in the neighborhood which still uses the extra “e.”

Currently most businesses in Wedgwood use the without-E spelling as they know the story of the naming by Albert and Edith Balch.

A newly-built apartment building which opened July 10, 2012, at 8606 35th Ave NE in Wedgwood was named Jasper because Jasperware is another one of the product lines of the original Wedgwood company in England.

Valarie is a volunteer writer of neighborhood history in Seattle.
View all posts by Wedgwood in Seattle History →
This entry was posted in apartments, Balch, boundaries, businesses, name of the neighborhood and tagged how did Wedgwood get its name, how to spell wedgwood, is wedgewood spelled with an e, Neighborhood History, Seattle, the e in Wedgwood, Wedgwood Ale House, Wedgwood or Wedgewood, What about the E. Bookmark the permalink.