Waterway: The Story of Seattle’s Locks and Ship Canal

Posted on July 9, 2017 by Wedgwood in Seattle History 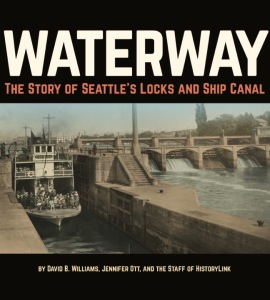 Where do you take your visitors from out of town, when they come to Seattle?

For both locals and out-of-town visitors, one of the favorite destinations in Seattle is the Ballard Locks.  Located in north Seattle just west of the Ballard neighborhood’s commercial center, the locks are a site of never-ending interest, seeing boats of all sizes, both recreational and commercial, pass through.

The ship canal extends eight miles from the saltwater Puget Sound, through the Ballard Locks to freshwater Lakes Union and Washington.  The ship canal is both a channel for recreational boating and a working waterway of fishing vessels heading out to sea.

Incredibly, it took more than sixty years from the time Seattle settlers first envisioned a ship canal in 1854, until its construction and completion in 1911-1917.  In commemoration of the centennial of the locks and the ship canal, authors David B. Williams and Jennifer Ott have co-written a new book:  Waterway:  The Story of Seattle’s Locks and Ship Canal.

How has the Lake Washington Ship Canal and the Ballard Locks shaped the character and the economy of Seattle in the past century?

Luxury yacht Thea Foss in the Locks in May 2017

Co-authors David B. Williams and Jennifer Ott have addressed these questions in their new book, Waterway.  Read here an excerpt of the book, which was printed in The Seattle Times newspaper.

David B. Williams is a geologist who writes about the intersection of people and the natural world.  One of his recent books, Too High and Too Steep, told the story of how and why Seattleites have always wanted to re-arrange the landscape.

Jennifer Ott is an environmental historian and assistant director of HistoryLink, the on-line encyclopedia of Washington history.  She has written many HistoryLink essays about the ship canal and the creation of the Port of Seattle which was the underlying legislation leading to construction of the ship canal.

The Puget in the ship canal centennial boat parade of July 9, 2017. Operated by the US Army Corps of Engineers, the Puget picks up debris from the waterway.

Valarie is a volunteer writer of neighborhood history in Seattle.
View all posts by Wedgwood in Seattle History →
This entry was posted in Events and holidays and tagged author readings, book talk, library events, maritime history, Seattle, Ship Canal Centennial. Bookmark the permalink.