Posted on December 13, 2014 by Wedgwood in Seattle History

This article is the story of the Hunter family and how they came to establish their Christmas tree lot in the Wedgwood neighborhood of northeast Seattle.

William O. Hunter and his wife Carol met at Shelton High School in rural Mason County, Washington, where William’s father had a dairy farm.  William and Carol married in 1948 and they began taking the farmland into the next-generation of business development by growing and selling evergreen Christmas trees.

Copyright notice:  text and photos in this article are protected under a Creative Commons Copyright; do not copy text or photos. 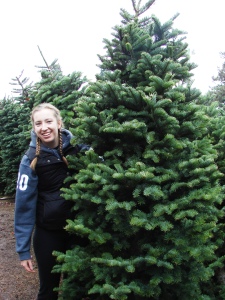 A customer tries on a tree at Hunter Tree Farm’s seasonal sale.

At first the Hunters only grew Douglas fir trees, and only functioned as wholesalers.  They shipped trees to California and gradually began to develop other retail outlets.  There was a plant nursery business called Van’s Northgate Nursery, 2335 N. 110th Street in Seattle, which sold the Hunter’s trees (Maurice Van Hollebeke, proprietor).

One year in the early 1950s, Van’s asked if William and Carol would come and handle the tree sales themselves, and the Hunters agreed to try it.  They sold the trees at fifty cents per foot, so a six-foot tree cost $3.  The Hunters made $2700 that year and they thought that they had broken into the big-time!

But Van’s Northgate Nursery was doomed, because it was in the path of the Interstate-5 freeway for which planning began in the 1950s.  With Van’s getting ready to close down, the Hunters thought they would like to try another Seattle sales outlet but, not knowing the city very well, they didn’t know where to look.

At that time Carol Hunter’s brother and brother-in-law were both working as real estate salesmen for Albert Balch, the developer of the Wedgwood neighborhood in northeast Seattle.  In the 1940s Balch had chosen the name “Wedgwood” for a plat of land where he built a unified group of houses.   As Balch continued to build more and more houses in the area, businesses began calling themselves Wedgwood and it caught on as the name of the neighborhood.

Bill Hunter Jr. with his father, William O. Hunter Sr., work together at the annual Christmas tree sales in Wedgwood.  All photos in this article by Valarie; do not copy without permission.

Today the intersection of NE 85th Street along 35th Ave NE is Wedgwood’s main commercial center, with a grocery store, drugstore, banks, restaurants, coffee shops, hair salons and offices.  But in the early 1950s the NE 85th Street present site of the QFC grocery store, the Wedgwood Broiler restaurant and other businesses, was vacant land.

Balch had purchased this southeast corner of the NE 85th Street intersection and knew that it was an appropriate site for commercial development, even though he was not a commercial developer.  In the 1950s Balch used this empty lot just as a place to store his lumber and construction equipment.

Carol’s brother and brother-in-law introduced the Hunters and asked Mr. Balch if they might use the corner of NE 85th Street for their Christmas tree sales in the month of December.  Balch readily agreed, as he knew this would be an interesting and enjoyable neighborhood activity with no “down side” as the tree sales were only for one month and did not compete with anything else in the business district.  In appreciation, the Hunters gave Balch a free Christmas tree for his own home at 6850 50th Ave NE. 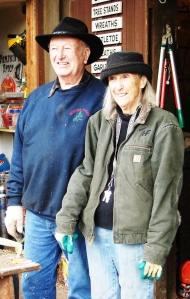 William O. Hunter Sr. and his wife Carol were married in 1948.  All photos in this article by Valarie; do not copy without permission.

The NE 85th Street sales site was successful and the Hunters returned each year during the 1950s.  But gradually, the available space for Hunters was getting crowded out because Wedgwood’s business district was being built up.

The corner of the NE 85th Street intersection which Balch did not own, was the northwest corner which had been owned by Joe Shauer since the 1920s.  His original tavern at 8515 35th Ave NE became the first business in the neighborhood to name itself Wedgwood, after Balch’s Wedgwood plat of houses.  Today the tavern is called the Wedgwood Ale House.

The first business on the southeast corner of NE 85th Street was the Tradewell Grocery Store which opened in 1959.  That year, the Hunters had to move their Christmas tree sales area southward on that block because of the space taken by Tradewell.  Then the Sir Wedgwood (Wedgwood Broiler) was built, and the space for Hunter’s tree sales became even more constricted.

Despite the problems of finding available space, all of this growth and development in the Wedgwood neighborhood in the 1950s made the Hunters even more interested in keeping a sales site there.  Wedgwood boomed with young families who became loyal customers of the Hunter’s Christmas tree business.

In 1963 a lease arrangement became available on the south side of NE 80th Street where Wedgwood Presbyterian Church had bought the two lots closest to NE 80th Street.  The third lot was going to be used by the Wedgwood Post Office at 7714 35th Ave NE where the Herkenrath house stood.

The Herkenrath house, pictured here in 1958, was on the present site of the Wedgwood Post Office.   To the left is the former nursery business building which is still used by Hunter Tree Farm at 7744 35th Ave NE.  Photo #75875, Seattle Municipal Archives.

The 7744 35th Ave NE site has offered great advantages for the Hunter’s Christmas tree sales from the time of their first use until the present day.  The site has good visibility along the arterial 35th Ave NE, there was a usable existing building which had belonged to a plant nursery business (Fosters, later called Wedgwood Gardens) and today there still is adjacent parking on the corner nearest to NE 80th, the lot owned by the church.

The Wedgwood Post Office is at 7714 35th Ave NE.  To the left is the Hunter Tree Farm property with the green poles and site enhancements done to create The Gathering Place in 2011.

After leasing for about nine years, in September 1973 the Hunters purchased the 7744 35th Ave NE property from Wedgwood Presbyterian.  The church retained the lot closest to NE 80th Street which today is still open space and parking.

Hunter Tree Farm’s annual Christmas tree sales is a beloved neighborhood tradition at the holiday season.  They open every year on the Saturday after Thanksgiving, and operate 9 AM to 9 PM through Christmas Eve.

With permission of the Hunter family, in the year 2011 site improvements were made to create The Gathering Place at Hunter Tree Farm, so that the site is usable year-round.  Community picnics and meetings are held at The Gathering Place, as well as summertime fruit stands. 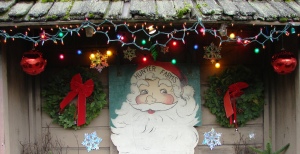 Valarie is a volunteer writer of neighborhood history in Seattle.
View all posts by Wedgwood in Seattle History →
This entry was posted in businesses, Events and holidays, Hunter's Tree Farm and tagged Christmas trees, Neighborhood History, Seattle. Bookmark the permalink.