Posted on August 6, 2012 by Wedgwood in Seattle History

While best known for its annual Christmas tree sales lot in December, the Hunter Tree Farm property at 7744 35th Ave NE in Wedgwood, is open to the community for year-round use.  In the summer of 2011 Wedgwood neighborhood activists coordinated the creation of The Gathering Place at the Hunter Tree Farm.  The project was guided by the Pomegranate Center in Issaquah, and was made possible by a grant from Green Mountain, parent corporation of Tully’s Coffee. 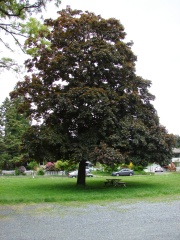 The grassy lot at the corner of NE 80th Street is owned by Wedgwood Presbyterian Church.

A unique feature of the Wedgwood neighborhood is its two privately owned but publicly-accessible open spaces on 35th Ave NE: a grassy lot nearest to the corner of NE 80th Street, owned by Wedgwood Presbyterian Church, and the Hunter Tree Farm property at 7744 35th Ave NE between the grassy lot and the Wedgwood Post Office.  In 2011 a grant-funded project called The Gathering Place enhanced the site of the Hunter Tree Farm which made the space more usable, with ground improvements and art.

From the 1920s until about 1962 the present site of the Wedgwood Post Office at 7714 35th Ave NE and all the rest of the space up to the corner of NE 80th Street was owned by the Herkenrath family.  In 1958 the Herkenraths wanted to sell and a corporation applied to the City of Seattle for a zoning change to put in a grocery store and shopping center there.  The city denied the zoning change because they wanted to keep commercial development clustered at NE 75th and 85th Streets.

From the 1940s a plant nursery business used the small brown building which still stands at 7744 35th Ave NE as their sales office.  It is presently used by the Hunter Tree Farm for their annual Christmas tree lot.

Finally in the early 1960s the Wedgwood Post Office was built at 7714 35th Ave NE, but they were probably short-sighted in not obtaining enough space.  The post office took only one-third of the available property.  The other two-thirds was bought by Wedgwood Presbyterian Church for $82,500.  They called it their South Property as it is south across NE 80th Street from the church building.  In 1973 Wedgwood Presbyterian sold the present site of the Hunter Tree Farm to them for $60,000.  Today the remaining South Property (grassy lot) at the corner of NE 80th Street still belongs to Wedgwood Presbyterian, and they have no plans to sell or develop it. 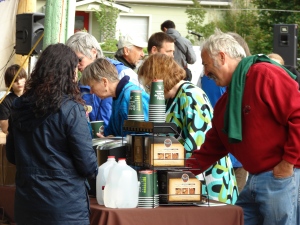 Bill Hunter Jr. (red sweatshirt) was the Hunter family liaison with the Gathering Place Project. He is shown here on September 17, 2011, enjoying Tully’s Coffee at the Celebration program.

Over the years the Wedgwood neighborhood has been able to enjoy the open spaces at NE 80th Street and there have been repeated inquiries about turning it into a public park.  This came out most strongly in the Wedgwood Vision Plan of 2010 and subsequent park acquisition efforts.

In Spring 2011 Wedgwood neighborhood activists became aware of the grant-funded Pomegranate Center, which works with public-gathering projects.   Wedgwood resident Per Johnson wrote a grant application which included a letter of permission from the Hunter family.

Since the Christmas tree sales occupy the lot only about six weeks out of the year, the Hunter family gave its permission for the lot to be improved for greater public use during other seasons.   Grant funding, underwritten by Tully’s Coffee, was awarded in April 2011 and Wedgwood’s Gathering Place Project was on the fast track: it was completed in less than four months.

Milenko Matanovic is the founder of the Pomegranate Center in Issaquah, so named because he believes that art should be like a seed which is planted and grows into something wonderful and unexpected.  As a young man in his native city of Ljubljana, Slovenia, bordering the northeastern edge of Italy, Milenko already felt that keeping art in museums was restraining art too much.  Milenko wanted to see art brought out in public where people could interact and benefit from it.  He began to be concerned with how art could be brought in to influence good design in the built environment: how can buildings and their surrounding areas be enhanced by artistic design principles?

Of particular concern to Milenko is to always bring elements of nature into design, because the sun, rain, wind, animals, and plants give people pleasure, feelings of peace, oasis and connection to the earth.   Another of Milenko’s primary emphases is “sustainability” which includes use of reclaimed or recycled materials, such as old wood, concrete blocks or rubber.  In the Pomegranate Center’s projects Milenko wants to live out the concepts of sustainability that we should be environmentally responsible by not wasting anything which can be reused, and that we don’t have to have a lot of “stuff” to be happy.

A volunteer-led project for the community 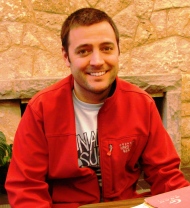 Volunteer Per Johnson wrote the grant application for the Gathering Place Project at the Hunter Tree Farm.

As part of the grant application to the Pomegranate Center, volunteers were enlisted to take leadership roles in the Gathering Place Project in Wedgwood.  In addition to Wedgwood Community Council volunteers, two other organizations, Sustainable NE Seattle and the Wedgwood Art Festival agreed to participate and bring in more volunteers.

A unique part of the Pomegranate program is its use of Public Space Rangers, professionals who donate time to projects.  Areas of expertise include landscape designers, architects and engineers.  The Public Space Rangers guided the improvement of ground surfacing at the Hunter’s site, construction of the stage and outdoor furniture, and enhancements which were of a more artistic nature to bring in color and interest.

The first design meeting for the Gathering Place project was held on June 11, 2011, with about ninety people in attendance.  It was a full-day workshop to solicit ideas and develop them based upon realistic site and budget limitations, materials availability and estimated construction costs.  Four concept plans were developed, then the volunteer design professionals from the Pomegranate Center and the Public Space Rangers worked on creating a final plan.  The result was approved by Bill Hunter Jr. who represented the Hunter family.

The final design was presented to the community on July 13, 2011, at a meeting which was held at Wedgwood Presbyterian Church and was attended by more than seventy people.     Mid-way through the meeting the power went off and the meeting was plunged into darkness, so everyone went over to Hunter’s, where Milenko Matanovic walked out the design on-site. 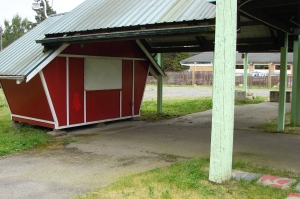 The birdhouse-shaped sales kiosk at the Hunter Tree Farm in Wedgwood became the design inspiration for artwork and enhancements of the site.

The design theme for the Gathering Place was inspired by the Hunter site centerpiece, the red, birdhouse-shaped sales kiosk.  Birds and birdhouses took over as the artistic enhancements to the site which would remind people of their connection to nature.  Poles, which are reminiscent of trees, were decoratively painted green and were arranged in patterns radiating out from the performance stage in the northeast corner of the site.  The poles can serve a useful function for the Hunter tree sales as dividers of the Christmas tree sections.  Already-existing light poles on-site were painted green like the other tree-poles and were given the “birdhouse” treatment, but no additional wiring or lighting was added.  This made it unnecessary for the project to apply for any construction-and-development permits from the City of Seattle. 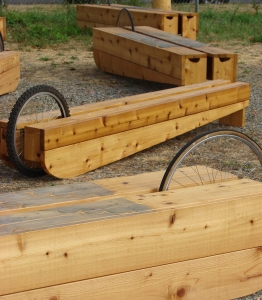 Movable seating for the Gathering Place at Hunter’s.

Functionality of the site was enhanced by building movable benches.    Non-movable components such as the walkways around the Hunter Tree Farm sales kiosk in the center of the site, were improved by leveling the ground and defining the walkways with tiles.  Donors had their initials inscribed and painted in the tiles, enlivening the cement walkways with color.

Almost all of the work on The Gathering Place at Hunter Tree Farm was accomplished in four marathon work days from August 18 through 21, 2011.   Workers slept and ate on-site, enabling them to spend more time at the project and experience a once-in-a-lifetime “barn raising” community effort. 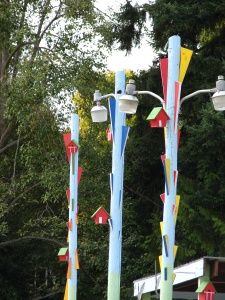 Both the functioning utility poles and additional decorative poles were given the “birdhouse treatment” in the design theme of the Gathering Place at Hunter’s.

The financial funding for the Gathering Place Project included $17,000 granted by Green Mountain/Tully’s Coffee.  The calculated value of community contributions, including the value assigned to volunteer hours, totaled $74,860.   An additional grant application written by Wedgwood neighborhood volunteer Bill Dock was awarded $13,000 from the City of Seattle’s Neighborhood Matching Fund.  This grant was used for Emergency Preparedness, including equipment and program costs for Emergency Preparedness Practices at the Gathering Place.

A shed called the Communications Hub was built as part of Emergency Preparedness and is located in the southeast corner of the Hunters site.  In case of the failure of all phone systems due to a storm or earthquake, the Hunter Farm Wedgwood Hub would be used by amateur radio operators to send emergency messages for the community.

The City of Seattle Emergency Management Program has participated in practice drills at the Wedgwood Hub, in which amateur radio operators practiced sending in messages from The Hub to the central Emergency Management office.  The Emergency Preparedness Committee which has been formed for northeast Seattle draws from several nearby neighborhoods, creating excellent networking among organizations and volunteers, all because of the use of the Gathering Place at Hunter’s. 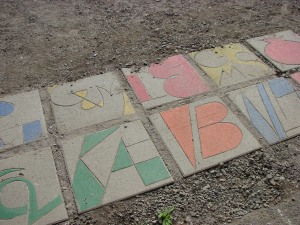 Cement paving tiles at the Gathering Place with the initials of donors.

Milenko Matanovic believes that one of the simplest and most powerful sentences in our language is, “what do you see?” The Hunter Tree Farm property is in a very visible spot along the main arterial of 35th Ave NE, and located next door to the busy post office.  People who walk or drive by the Gathering Place get a glimpse of a clear, organized space.  They can see an improved, inviting site with level, cleared ground, artistic enhancements, a covered walkway and seating.

The Gathering Place site contributes to the “sense of place” in the neighborhood.  Upon closer inspection one can see colorfully inscribed cement paving tiles which enhance the walkways, and movable seating which can be arranged for audiences at a performance, or to create conversation areas.  The additional poles which were put in are artistic but also serve to visually frame the space.  The poles help the eye to measure and divide the space between the poles as outdoor rooms instead of a vast empty lot. 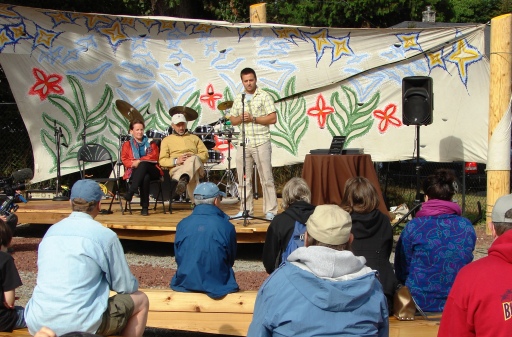 The Gathering Place Opening Celebration was held on September 17, 2011.  Neighborhood volunteer coordinator Per Johnson thanked Tully’s Coffee for the financial underwriting and the Pomegranate Center for leading the design and build of the project.

Seeing the space as something, a Gathering Place, lets people know that “community” is happening here.  Even more than the physical improvements to the site, the newly named Gathering Place at Hunter Tree Farm has become a center for neighborhood activities.  In the time since its creation in the summer of 2011, the Gathering Place has been used for the Wedgwood Art Festival, Emergency Preparedness Drills, Wedgwood Outdoor Cinema, Sustainable NE Seattle festivals, fruit stand sales in summer, pumpkin sales in October and numerous other community meetings, events and festivals.

Anyone can sign up to use the Gathering Place space

Anyone is welcome to use the Gathering Place for a picnic, children’s birthday party, or as a place to sit and watch Wedgwood go by.  The volunteers who work on maintaining the Gathering Place and who do event scheduling are called “Hunter Gatherers.”  They have a calendar for site use and reservations.  Some of the uses are that in summer there is a berry sales stand at Hunters, and in October there is a pumpkin sales lot.  From Thanksgiving through Christmas each year, the Hunter Tree Farm property is used for their annual tree sales.

The decorative birdhouses on poles at the Gathering Place, are now really being used by birds.