Posted on June 7, 2012 by Wedgwood in Seattle History

The Herkenrath house, pictured here in 1958, was on the present site of the Wedgwood Post Office. The small building at the left still stands at 7744 35th Ave NE, site of Hunter Tree Farm. Photo #75875, Seattle Municipal Archives.  The photo was taken by a corporation which was applying to build a grocery store at the site, an application which was rejected because of City zoning regulations.

John and Freda Herkenrath were German immigrants who had lived on Seattle’s Capitol Hill before moving out to Wedgwood in 1926.

The Herkenraths built a house at 7724 35th Ave NE, joining the growing community of Dutch and German immigrants who were settling along 35th Ave NE, which in those days was a one-lane dirt track.

After the deaths of John and Freda their house went to John’s brother and was lived in by his family.   On the north side of the house, land was leased to a plant nursery called Foster’s, later called Wedgwood Gardens.

In 1958 a corporation applied for a zoning change to build a shopping center at the site of the Herkenrath’s property, but the application was turned down by the Seattle City Planning Commission.  The reason given was that the city wanted to keep commercial development clustered at the intersections of NE 75th and 85th Streets only. 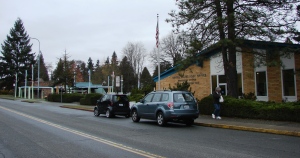 In the early 1960s the Herkenrath house was moved off of the site and the lots sold separately to different entities.  In place of the Herkenrath’s house there is now the Wedgwood Post Office.

The two lots to the north of the post office are now the Hunter Tree Farm and the corner-of-NE-80th Street lot owned by Wedgwood Presbyterian Church.  The small brown building closest to the sidewalk at 7744 35th Ave NE is the former Wedgwood Gardens plant nursery sales building.

In the summer of 2011 a consortium of local activists led a grant-funded project at Hunter Tree Farm.  With the permission of the Hunter family, improvements were made for greater public usability of the site.

The result was creation of Wedgwood’s Gathering Place at the Hunter Tree Farm.   The site has become a community space with events year-round.   A pop-up farmers market meets there in spring and summer, and in October, Scout Troop #151 holds a fundraising pumpkin sale.

Most especially, Wedgwood looks forward to the Hunter’s annual Christmas tree sales in December with the trees, decorations, music, hot cocoa and general conviviality of Wedgwood’s Gathering Place in the heart of the neighborhood.

Both the functioning utility poles and additional decorative poles were given the “birdhouse treatment” in the design theme of the Gathering Place at Hunter Tree Farm.

Interviews with nephews Frank & John Herkenrath; interview with neighbor Dora Nicklas who formerly lived at 7757 – 35th Ave NE.  Mrs. Nicklas was there on the day that Mr. Herkenrath was killed.