Names in the Neighborhood: from Decatur to Thornton Creek

Posted on March 2, 2013 by Wedgwood in Seattle History 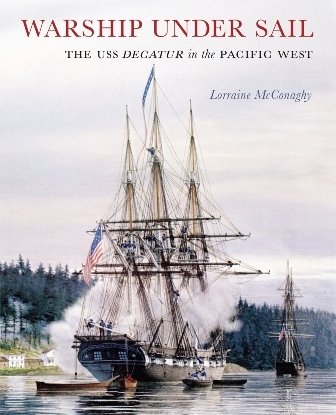 Author’s note: This article is about the name of a school in the Wedgwood neighborhood.  If you are looking for the creek named after John Thornton, go here.   For an outline of the history of the Thornton Creek watershed and The Confluence at Meadowbrook, go here.

The US Navy sloop-of-war Decatur became known as “the ship that saved Seattle” on January 26, 1856.  At dawn that day Seattle’s less-than-two-hundred white settlers huddled in a blockhouse at the present site of First & Cherry Streets while gunfire came from unseen attackers behind the tree line along Third Avenue.  Seattle had been in existence only a little more than four years and the dense forest had been cut back only that far.

In 1855-56 the rapid, forceful, unfair process of treaty-making with Indian tribes resulted in turmoil which was later called the Puget Sound Indian War. Tension and fear increased when word came of killings in the White River Valley (Auburn.)  Those who had escaped fled to Seattle for protection.  In preparation for a possible attack, Seattle’s settlers built two defensive structures called blockhouses, and these were collectively named Fort Decatur in honor of the ship.

The USS Decatur was a large sailing vessel, 117 feet long, outfitted with heavy cannons.  Launched in 1838, the ship was named for Commodore Stephen Decatur, the US Navy’s greatest hero, who lived 1779 to 1820.  The ship was built in New York and commissioned to protect American interests along the Atlantic coastline, then was ordered to the Pacific Squadron to serve from 1854 to 1859.  The Decatur’s mission was to enforce treaties and protect coastal commerce. 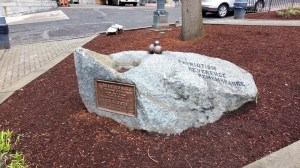 The Battle of Seattle memorial marker at Third and Jefferson Streets

In January 1856 the captain of the Decatur obtained information that masses of Indian warriors from eastern Washington were crossing Lake Washington via canoe, on their way to attack the settlement at today’s downtown Seattle.  The Decatur had been summoned to protect the little settlement at Seattle and the timing was providential, as the ship was there and ready on the day of the actual attack on January 26th.  Return fire from the ship’s cannon reached up and over Third Avenue into the forest, and the Indians retreated.

In the 1930s two granddaughters of Seattle founder Arthur Denny began writing down the stories they had been told as they were growing up.  The Battle of Seattle was always told to them as one of the most critical days of early times even though the battle only lasted one day.  Most of the settlers had to stay in the blockhouse for the rest of the winter because their cabins had been burned down and food supplies destroyed.  In the blockhouse in March 1856, David Denny’s wife Louisa gave birth to their second daughter, whom they named Madge Decatur. 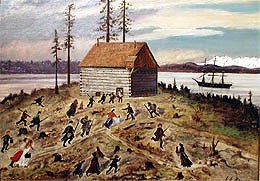 Seattle’s pioneer families never lost their appreciation for the USS Decatur, writing that “but for the presence of the Decatur Seattle might have been wiped off the map.”  (p. 243, Four Wagons West.)  When Arthur Denny’s daughter Catherine married George Frye, who had served with the citizens militia during the war months, they named their homesite “Decatur.” (p. 175, Pig-Tail Days in Old Seattle.)

In the 1890s Arthur Denny’s brother David and his wife Louisa Boren Denny had a house on Queen Anne hill, and they named their home Decatur Terrace.  (p. 105, Westward to Alki.) 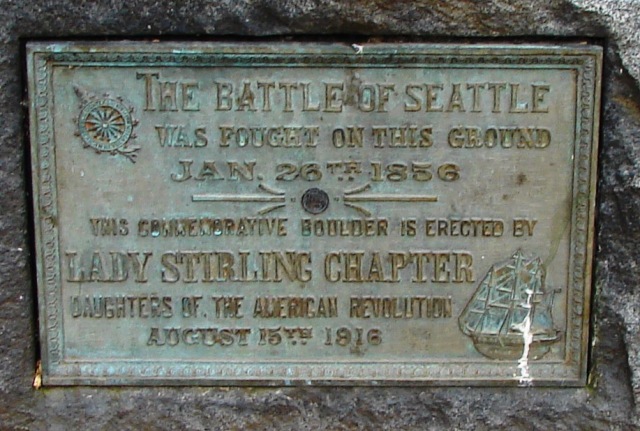 Today, the only street-name remembrance of the USS Decatur is tiny South Decatur Place, crumpled up next to the freeway off of 10th Ave South, near the Veterans Hospital.  A bedraggled marker at Third & Jefferson Streets, in the City Hall Park on the south side of the King County Courthouse, commemorates one of the blockhouse sites, the Battle of Seattle and the role of the USS Decatur on January 26, 1856. 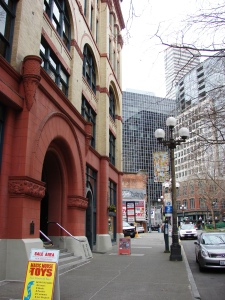 Before there were any buildings in Pioneer Square, it was the site of the Battle of Seattle in 1856. Seattle pioneer families took refuge in a blockhouse at today’s 1st & Cherry Streets. The building at left is on the site of Yesler’s cookhouse where soldiers ate and slept between duty shifts.

In their writings the two granddaughters of Arthur Denny told of the sources of Seattle street names.   One book, Pig-Tail Days in Old Seattle, has an essay about each street in what is now downtown Seattle, and the author’s memories of growing up in the 1870s and 1880s.

It was Arthur Denny who named the alliterative pairs of downtown Seattle streets: Jefferson, James, Cherry, Columbia, Marion, Madison, Spring, Seneca, University, Union, Pike and Pine.  It is believed that Jefferson and Madison were named for US presidents; Cherry might be for the name of the place that the Dennys came from, Cherry Grove, Illinois.

One of the Denny brothers who came out West with the family group but who stayed in the Portland area, was James Marion Denny.  Columbia was the name for “northern Oregon” that the settlers wanted but the name Washington Territory was chosen by US Congress.

There was a spring of water at Spring Street, and the two granddaughters of Arthur Denny felt that this was definitely the source of the street name.  We can speculate that Seneca Street might be for Seneca Falls, New York, the hometown of Rev. David Blaine, a minister who joined the militia of men defending the blockhouse on January 26, 1856.  When the battle began, Rev. Blaine’s wife and six-day-old baby boy were taken aboard the Decatur.   Other women ran from their homes to the blockhouse at the first sound of gunfire and had to wait out the battle there. 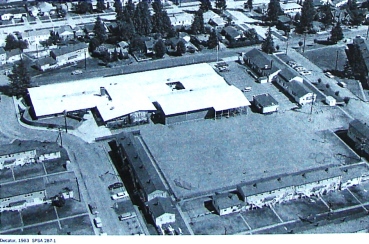 Decatur School as it looked in 1963, before Shearwater barracks buildings were cleared from the site and an addition built in 1966.  The front door of the school building is on 43rd Ave NE at the top of the photo.  Courtesy of Seattle Public Schools Archives #287-1.

Like the Seattle street names whose origins we are not familiar with, over time place names can lose their meaning when we don’t know their history.  I have had the experience of being told that the Burke-Gilman Trail is named for Suzie Burke, a landowner in Fremont, but this is not so; the Trail is named in honor of the two men who founded a railroad in 1887 along the present trail route.  After I posted my blog article about the Burke-Gilman Trail I was surprised that a number of people told me they’d never heard the story and they didn’t know who the Trail was named for.

So it may be also, with the Decatur Elementary School in Wedgwood at 7711 43rd Avenue NE, that the name “Decatur” no longer has meaning in the neighborhood.  When the school opened in September 1961 it was surrounded by Navy housing called Shearwater.  The name Decatur was chosen in tribute to the Navy hero Stephen Decatur, to the warship Decatur which saved Seattle in 1856, and in honor of the community of Navy families whose children were the first to attend this school.  (Source: Seattle School Histories listing for Decatur School.) 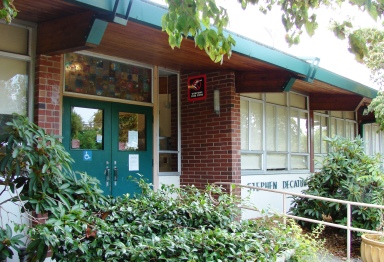 “Stephen Decatur” is written beside the front entrance of the old Decatur School building, but partially obscured by shrubbery.

In the spring of 2008 signs went up on the fencing at Decatur School that the new name was “Thornton Creek School at Decatur.”  This angered some neighbors who wondered why the school was allowed to change its name without notifying the neighborhood and taking input.  Part of the explanation is that the school has an alternative program, so Thornton Creek is the name of the program while the building itself was still called Decatur.

Some people in the community felt that the school name change was a politically-correct attempt to downplay militarism, since the name Decatur had war associations.  And since the name “Thornton Creek” is well-known in northeast Seattle, people wrote to me to ask, “where’s the creek???”  Thornton Creek does not flow directly past the Decatur School building so the name seemed inappropriate.

For those in the school who were involved in the name change, it was a sincere attempt to define the program emphasis on environmental learning and give an association of something in the community which the children had seen personally, knew and could identify with, the Thornton Creek Watershed.

Comparison:  the naming of Wedgwood School 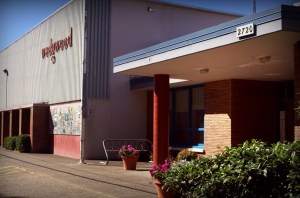 Wedgwood School, located on NE 85th Street at 30th Ave NE, opened in September 1953 and was officially named in the spring of 1954, even though the school was all-portables and the building hadn’t been built yet.  By that year, the name Wedgwood had definitely become the name for the neighborhood, not officially designated but the name spread informally from the first housing development built by Albert Balch.

Phone book listings of the 1940s show that by the end of the decade there were already a number of businesses which called themselves Wedgwood, and it seemed that was the most natural and appropriate name for the new elementary school. 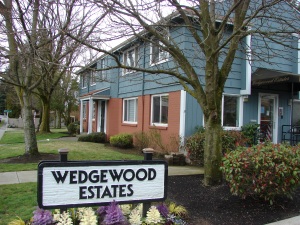 The Wedgewood Estates Apartments is one of the few businesses in the neighborhood which still uses the extra “e” in the name. The rental office is at 3716 NE 75th Street, in one of the original brick fourplexes built in 1949.

On the east side of 35th Ave NE in Wedgwood there has not been any strong historical neighborhood name use other than the Shearwater Navy housing.  In the 1940s there was a community club called Eastwood, before its merger into one club for all of Wedgwood.  One of the eastern-Wedgwood plat names is Oneida Gardens, which was the original name for today’s Wedgewood Estates apartment complex.  Without any commercial district, long-running institutions or landmarks in Wedgwood along 40th Ave NE, there aren’t any historical name associations which are meaningful to current residents around the area of Decatur School.

The name of Decatur School fades away and then returns again

In September 2016 a new Thornton Creek School building opened at 7712 40th Ave NE, with the designation “at Decatur” no longer being used.  It seemed that like the other references to Decatur, including Seattle pioneer residences and street names, the name of Decatur School no longer had resonance in modern experience in Seattle or in the Wedgwood neighborhood.  Unlike “Wedgwood” which spread to general use in business names and then to the whole neighborhood, the name “Decatur” faded from use.

As of 2017, after retrofitting the building, the old Decatur school building which faces 43rd Ave NE re-opened as a school, with a specific academic program called accelerated curriculum.  The building continues to be called Decatur.  The school block between 40th and 43rd Avenues NE now has two separate elementary schools, one called Decatur and the other Thornton Creek. 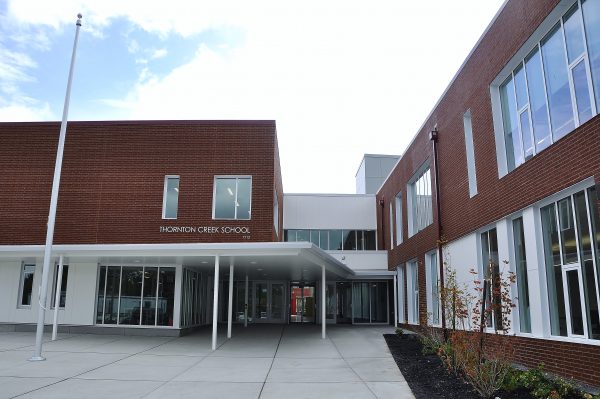 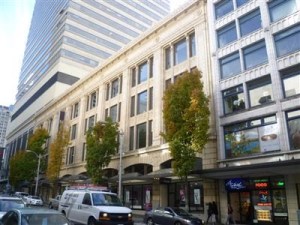 The Decatur Building at 1521 Sixth Avenue in downtown Seattle.

Seattle Landmarks list:  The Decatur Building at 1521 Sixth Avenue in downtown Seattle was built and named by Catherine Denny Frye, the daughter of Arthur Denny, in 1921.  Henry Bittman was the architect.

5 Responses to Names in the Neighborhood: from Decatur to Thornton Creek