The Canney Family and the Lake Union Presbyterian Church

Posted on February 6, 2019 by Wedgwood in Seattle History

The Fremont neighborhood of Seattle is located at the northwest corner of Lake Union, which Seattle’s early-arriving white settlers recognized as an ideal location for industries such as sawmills. 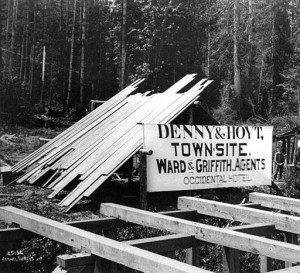 In 1888 Fremont’s developers began sales of lots from this real estate sign at about the present site of the Fremont Bridge. Photo courtesy of UW Special Collections, Asahel Curtis Item 482.

Even though the future-Fremont site was the 1854 homestead claim of William A. Strickler, settlement of this advantageous land area was delayed by legal problems until 1888.

Finally when the new Seattle suburb was named Fremont and was opened up for settlement in 1888, there was a land rush of buyers wanting to obtain lots.  In order to help get the new community going, the real estate agents offered residential lots at the price of $1 to the first one hundred buyers.

Along with residences and businesses, a minister was one of the first to buy property in the new Fremont development.  Rev. Albert Canney was a church-planter employed by the office of the Presbyterian churches of Seattle.  Rev. Canney purchased a site for a future church building in Fremont on North 36th Street at the northeast corner of 1st Ave North. 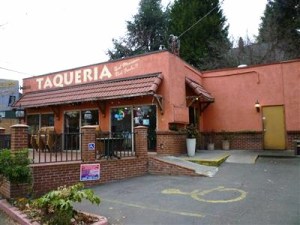 Former site of the Lake Union Presbyterian Church, 106 North 36th Street. The present building built in 1912 is to be torn down soon, for construction of an apartment building with a ground-floor restaurant.

Just like everything else in the booming new Fremont neighborhood, plans to organize a church in 1889 proceeded with great rapidity and success.  Rev. Canney met with interested individuals and they registered as an organized group (articles of incorporation) on April 20, 1889.

During this time, 1889-1890, construction of a church building got started under Rev. Canney’s oversight.   The church was built on the northeast corner of North 36th Street and 1st Ave North.  A later commercial building, pictured at right, was constructed on the site in 1912.  Now in its turn the present building is to be torn down, and another new building built.

To build the new church in Fremont in 1889, Rev. Canney used a stock set of building plans which he also used in several other early Presbyterian churches around the growing city of Seattle.  The new church on North 36th Street in Fremont was named Lake Union Presbyterian Church and the congregation began meeting in its new building in March 1890.

The Canney family in Seattle

Church-planter Rev. Albert Canney and his second wife, Agnes Cowles, came to Seattle with a blended family.  Albert & Agnes had each been widowed and had children from their previous marriages.  Agnes Cowles had a daughter, Mabel, who became the nurturing big sister to her step-brother George Canney and to Ella and Arthur who were born to Albert & Agnes.  Arthur, the youngest, was born in 1888 in Oregon while the family was on their way from the East Coast out to Seattle to work with planting new churches.

The Canney family became active members of the Fremont community in Seattle and spent the rest of their lives there, while Rev. Canney continued to work with church planting at several locations, including Ballard.

There are two church congregations in north Seattle which were begun by Rev. Canney in 1889 and still exist today.  The Ballard group started at 17th & Market Streets and is now called Northminster Presbyterian at 7706 25th Ave NW.  The Fremont congregation which started out as Lake Union Presbyterian, is now the Wallingford Presbyterian Church at 42nd & Ashworth. 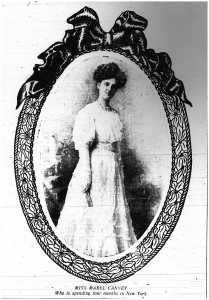 Rev. Canney’s eldest son George became a postal carrier in Seattle.  Youngest son Arthur started out as a delivery driver for Carl Signor’s grocery store, and then Arthur spent the rest of his career as a transit driver in Seattle.  Mabel Canney’s signature as a witness at the weddings of each of her brothers indicates the lifetime close relationships of the Canney family.

In the early 1900s both Mabel and her sister Ella, younger by nine years, had a thriving business as piano teachers – so much so, that they had to have two studios for meeting with students.  The Canney family home at 4136 Woodland Park Ave North was built with a studio in a front room for teaching piano lessons.  Then in the years 1908 to 1910 Mabel and Ella obtained an additional studio in a second-floor room of a commercial building in the heart of Fremont’s business district.

A piano studio in downtown Fremont

In his Now and Then column of May 14, 2017, Seattle historian Paul Dorpat wrote of this photo of Fremont Avenue (below) showing a store building (at left foreground) with the upstairs window sign “Mabel E. Canney  – Piano.”  The street view is northward and the building is the Fremont Pharmacy at 3219 Fremont Avenue. 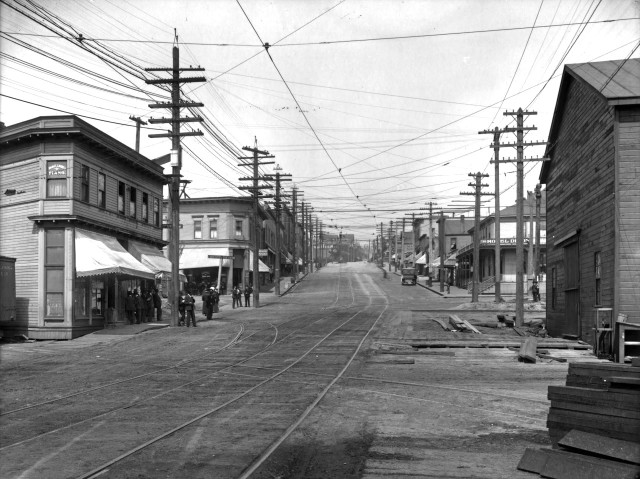 The Fremont Pharmacy building at left was on Fremont Avenue at North 32nd Street.  North 32nd Street no longer exists because of the creation of the ship canal in the years 1911-1917.  This building was moved or demolished to make way for the canal.

The next block is North 34th Street where, at second left in the above photo, is the building which became Fremont Drug Company.  Later that drugstore building at 3401 Fremont Avenue became the Fremont Tavern.  In June 2001 the 3401 building was moved off of the site, westward two blocks to its present location as the Red Door at 3401 Evanston Avenue.

At second right in the above photo, the building at the northeast corner of 34th & Fremont was Hotel Dixon, a boarding house built in 1889, originally called Shorey House.  Hotel Dixon was torn down in 1927.  It was replaced by a building which was Costas restaurant for many years, and is now a Chase Bank branch. 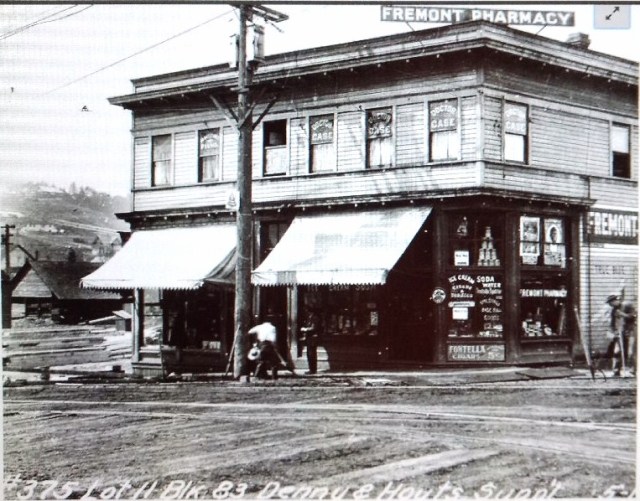 The Fremont Pharmacy building, 3219 Fremont Ave, circa 1909. The north corner of the building (at right) shows the Fremont Pharmacy sign on top, and the window sign of Dr. Schuyler W. Case, physician, on the second floor. Mabel Canney’s piano studio was on the second floor at left, south corner of the building. Photo courtesy of UW Special Collections, James Patrick Lee Item 294. 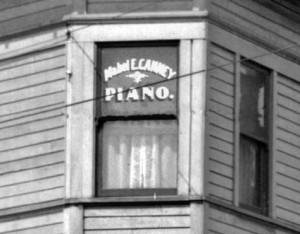 Listings in the Seattle City Directory show that in the year 1910, it was Mabel Canney’s younger sister Ella, instead of Mabel, who was teaching piano in the upstairs studio of the Fremont Pharmacy building.  That was the last year of the studio, for two reasons.  One reason was because Mabel Canney got married in December 1909.  She then moved with her new husband to 3529 Densmore Avenue North in Wallingford, where Mabel continued to teach piano out of her new home.

The other reason for the end of the piano studio was that the Fremont Pharmacy building had to either be moved or demolished.  In 1910-1911 preparations were underway for the creation of the ship canal.   The widening of the existing small stream flowing out of Lake Union, once called Ross Creek, caused the 3200 block of Fremont Avenue to have to be removed.

Today along what was formerly the 3200 block of Fremont Avenue there is a viaduct spanning the gap between North 34th Street and the Fremont Bridge.  Underneath the viaduct are the railroad tracks which became the Burke-Gilman Trail along the edge of the ship canal. 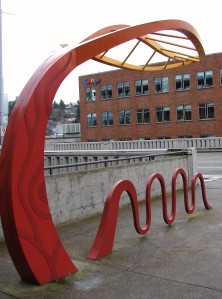 A viaduct was built for the elevation gap created in 1911-1917 by the new, wide ship canal.  The viaduct extends from the Fremont Bridge to North 34th Street.