Posted on January 16, 2017 by Wedgwood in Seattle History

Before the present-day ship canal at the Fremont neighborhood of Seattle, there was a smaller, hand-dug channel.  It had been used for sending logs to mill, and small boats could travel in the canal.  Prior to the completion of the Lake Washington Ship Canal in 1917, no neighborhood-boundary distinction was made as to the south side of the canal at Fremont, so the address of Carl Signor’s Grocery and Feed Store was listed as in Fremont.

Carl Signor was born in 1868 in St. Louis, Missouri, where his father was a salesman for a coffee and tea company.  The family was bitten by the go-West bug and they moved to Spokane, Washington, in the 1880s.  Carl married and moved to Seattle to start a grocery business.  He began with the store building pictured below, which was built in 1904 in the 2900 block of Westlake Avenue just on the south side of the Fremont bridge.  The store sign advertised “Carl Signor’s Groceries, Hay, Grain, Feed and Poultry Supplies.”

Carl Signor’s grocery store is seen in this 1915 photo looking north. The posts of the trestle bridge to Fremont can be seen. On the horizon is B.F. Day School. Photo 2787, Seattle Municipal Archives.

The trestle bridge damage in 1914

In 1914 work was ongoing to dig the present ship canal at Fremont. The original, narrow channel had already been made wider and had been spanned with a bridge called a trestle, meaning a flat, rigid structure supported by posts.  The trestle bridge was wide enough to support streetcar rails and had a lane for the increasing number of automobiles which were being driven in Seattle.

Fremont was a successful early community because of its advantageous location at one corner of Lake Union.

During the work of digging a much deeper and wider channel for the ship canal, the waters of Lake Union had been held back by a dam at the northwest corner of the lake.  A Seattle Daily Times newspaper article of March 14, 1914, described the heroic actions of Carl Signor of the day before.  There had been a dam break in the the channel just opposite Signor’s grocery store near the Fremont Bridge.  From his vantage point in the grocery store building overlooking the dam at the mouth of Lake Union, Carl Signor saw the straining timbers with water beginning to leak through, and he heard the warning sounds of the dam’s impending break-up.

At the sound of groaning timbers and cracking ramparts, Carl Signor ran out into Westlake Avenue and stopped all streetcar and pedestrian traffic from crossing the endangered Fremont Avenue trestle bridge.  A few minutes later, the dam burst and a torrent of water and timbers tore out the center of the trestle.

The Fremont trestle bridge was torn out by floodwater from a dam break on March 13, 1914.

After the Fremont trestle collapse in 1914, traffic had to be re-routed over another trestle located to the east on Stone Way.  Fremont merchants were dissatisfied because without a bridge to Fremont Avenue, business flow was cut off and customers did not come past their stores.  Another temporary trestle was built to Fremont, and then when the Lake Washington Ship Canal was completed, the modern Fremont bascule bridge, with counterweights which cause the bridge to swing open, was built in 1917.

Today’s Fremont Bridge is the busiest bascule bridge in the world, opening more times per day than any other of the Lake Washington Ship Canal Bridges of Seattle. 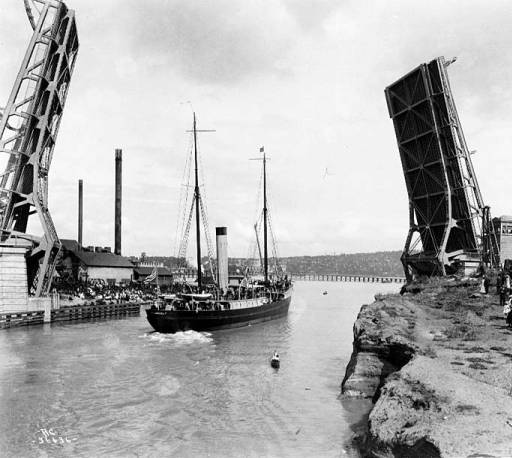 At the ship canal opening day celebration on July 4, 1917, we see the new Fremont Bridge. Beyond it to the east is the temporary Stone Way trestle bridge. Photo courtesy of University of Washington Special Collections.

Today’s view of the Fremont Bridge includes the Aurora Bridge just to the east.

Valarie is a volunteer writer of neighborhood history in Seattle.
View all posts by Wedgwood in Seattle History →
This entry was posted in Fremont neighborhood in Seattle and tagged Lake Washington Ship Canal, Making the Cut 100, Neighborhood History, Seattle. Bookmark the permalink.