Posted on October 15, 2016 by Wedgwood in Seattle History

Although another neighborhood of Seattle claims to be the Center of the Universe, the Wedgwood neighborhood has a center of activity called The Gathering Place at the Hunter Tree Farm.  In October 2016 the site has once again been transformed into the Pumpkin Universe. 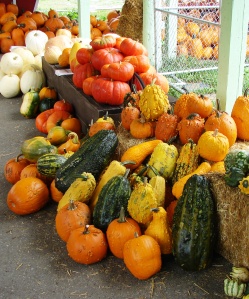 The Hunter family owns the property at 7744 35th Ave NE next to the Wedgwood post office and they use it for their annual Christmas Tree sales in December.  The Hunter family gives permission for public use of the site for many other events during the year.  During the summer of 2016 there was a raspberry sales stand and an end-of-summer community picnic.

Now comes the transition to autumn and the annual pumpkin sales.  In the year 2016 the pumpkin patch is a fundraiser for Scout Troop 151.

The pumpkin patch is open at Hunter’s each Saturday and Sunday, 10 AM to 6 PM from October 8th through October 30th, 2016.

Valarie is a volunteer writer of neighborhood history in Seattle.
View all posts by Wedgwood in Seattle History →
This entry was posted in Events and holidays, Hunter's Tree Farm and tagged activities in the Wedgwood neighborhood of Seattle, community activities, Halloween season, Neighborhood History, Seattle. Bookmark the permalink.

1 Response to Pumpkin Season 2016 in Wedgwood