Street-grade: ups and downs in Wedgwood

Posted on March 29, 2013 by Wedgwood in Seattle History 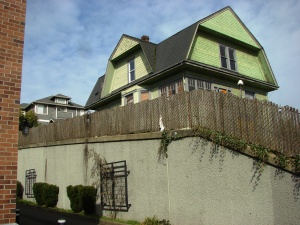 The Big Green House at 7321 35th Ave NE was built in about 1910.  It had a retaining wall around it, showing that the street level has been lowered in the section in front of the house.  The house was demolished in 2015.

Wedgwood’s main commercial corridor is along 35th Ave NE which was first declared an arterial in 1934.  Some improvements were made at that time, including some widening and some road-grading to level out the surface and make it more passable for car travel.  More major street improvement efforts came in the 1950s after all of Wedgwood finally came into the city limits.

We can still see the results of road-grading on 35th Ave NE in the “ups and downs” of streets and houses.  Some of the evidences of road-grading in Wedgwood are places where there are retaining walls such as along NE 75th Street next to Safeway, and houses which are either high above or below the level of arterial streets.  The area around the intersection of 35th Ave NE with NE 75th Street has the most examples of ups-and-downs in Wedgwood. 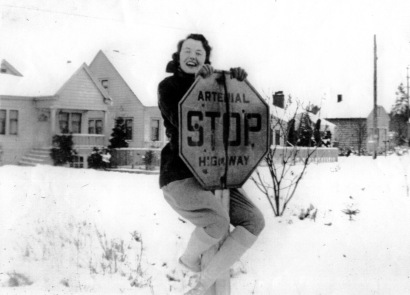 In 1934 the community-spirited Goodwin family documented the coming of stop signs on side streets along 35th Ave NE when it was declared an arterial. The Goodwins came to live at 3248 NE 89th Street in about 1908 but the current house has been completely rebuilt from the original.

We do not know why the Goodwins chose to live in the remote Wedgwood area, except probably that it was what they could afford.  The family had a car, and Lore Goodwin worked for the Army Corps of Engineers.  After the Lake Washington Ship Canal was completed in 1917, he drove to work at the office at the Ballard Locks, where he was chief clerk.

The Goodwins took a great interest in all development in Wedgwood and they believed that the neighborhood would eventually become part of the City of Seattle.  When 35th Ave NE was arterialized, Mrs. Goodwin predicted, “35th Ave NE is going to be a big deal someday.” 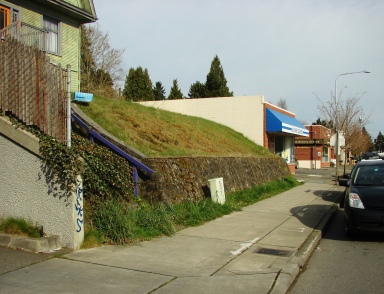 The Big Green House at 7321 35th Ave NE has a retaining wall which shows that the house was there long before road-grading.

South of the intersection of NE 75th Street, the Big Green House at 7321 35th Ave NE was one of the oldest in the neighborhood.  Due to the lack of construction records, a build date for the house can only be estimated at about 1910 based upon other property info and family records for William Voss who may have built the house.

We can see the potential problems with tearing down the house and redeveloping this site, as an old retaining wall, probably dating from the 1934 leveling of 35th Ave NE, was holding back a slope.  This will have to be dealt with to protect neighboring buildings during any tear-down and reconstruction.  Update:  The Big Green House was demolished on February 17, 2015. 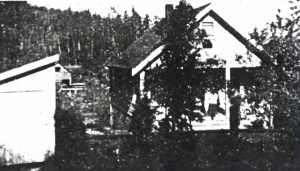 Another very early family in Wedgwood were the Jacklins who were ethnic Russians from Alaska.  They came to Seattle in 1916 and built a house at 7528 35th Ave NE, just north of the intersection.

The Jacklin’s fourth child, Priscilla, was born in the house the year it was completed, 1918.  In 1956 Priscilla interviewed developer Albert Balch and wrote an article in the Wedgwood Echo about how “Wedgwood” was chosen as the neighborhood name. 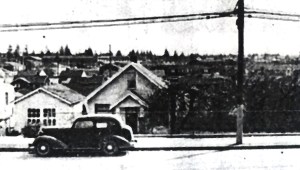 The Jacklin house in 1956 was lower than the level of 35th Ave NE. The garage at left was built in 1922 as a grocery store. The Jacklins kept a cow and sold milk.

The Jacklin’s 1919 photo showed their house at-level with 35th Ave NE that year.  According to the recollections of Priscilla’s mother, Mrs. Jacklin, by 1956 there had been at least two regradings, and when 35th Ave NE was widened a retaining wall had to be built to support the embankment in front of the Jacklin’s house.

The Jacklins owned several lots, and in this old photo we see the fruit trees that they planted next to their house.  Next to the Jacklins (off to the right as we look at the Jacklin house photos) was the home of the VanderWels at 7512 35th Ave NE, now the site of Chase Bank and its parking lot. 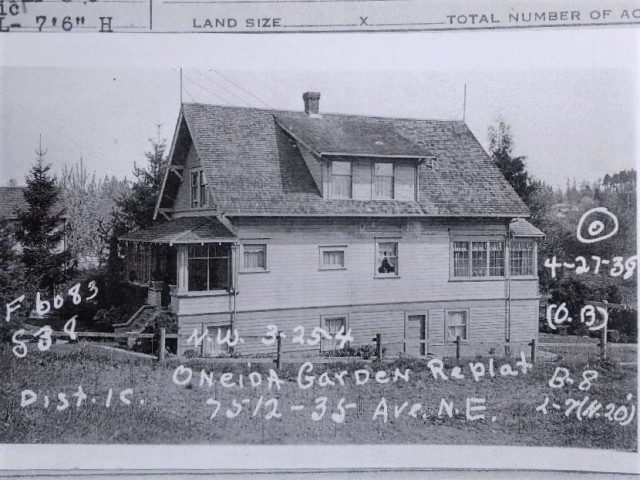 The VanderWel house was at 7512 35th Ave NE, present site of the Chase Bank parking lot. This house was moved to 7308 38th Ave NE by the McGillivray’s to expand their parking lot.  Photo courtesy of the Puget Sound Regional Archives, repository of the property tax photos of King County.

Seattle Engineering Dept. photo of June 1951 shows the retaining wall in front of the Vanderwel’s house at 7512 35th Ave NE. The McGillivray’s Store (Chase Bank building) had not yet been built. The parking sign in the foreground is for the other stores at the corner of NE 75th Street. Seattle Municipal Archives photo #42951.

As the retaining walls got higher in front of the Jacklin and VanderWel houses, the VanderWels bailed out.  Henry VandelWel died in April 1951 and the rest of the family didn’t want to stay in the house, hemmed in by the retaining wall.

The McGillivrays had been operating a successful store across the street, present site of Seattle Coin Shop, and they wanted to build a new store.  They bought the Vanderwel’s property which included the house and several lots between the house and the Ida’s Inn building on the corner of NE 75th Street.

In 1994 more of the Jacklin property was taken to build the Thai of Wedgwood building with the address 7520 35th Ave NE,.  It is between Chase Bank’s parking lot and the Jacklin house which still stands at 7528 35th Ave NE.

Looking east along NE 75th Street from the intersection of 35th Ave NE, we see a retaining wall for Safeway.  A new store was built at the back of the lot in 1965 which necessitated filling in and raising the grade of the parking lot.  The retaining wall was put in not because the street was lowered, but because the Safeway lot was filled in, leveled and raised.

This 35th Ave NE regrading work in 1968 and the rebuilding of Safeway, also caused a short-lived Dairy Queen building to have to be torn down.  It had been located in a free-standing building on the Safeway parking lot.  A new building for Dairy Queen was built at 7320 35th Ave NE, later used for a series of pizza stores (Domino’s, Zaw Pizza and Veraci.) 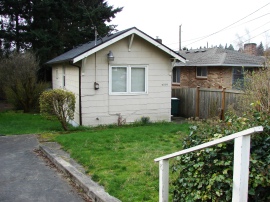 Both regrading and widening have changed the configuration of 35th Ave NE over the years.  The last major widening was in 1968.  In 2019 a major re-lining of the lanes was undertaken to create bike lanes as well as help slow traffic by reducing each direction to one lane.  A center left-turn was created because studies showed that it would help prevent rear-end crashes of turning vehicles.  Time will tell whether this re-configuration will help with traffic issues. 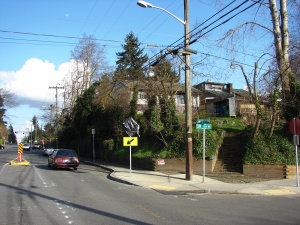 One block farther east of the intersection of NE 75th Street, a house at 7356 39th Ave NE was built in 1950 just before road-grading cut down the level of NE 75th Street in that block, leaving the house high and dry.

A photo taken on March 30, 1954 to document a homeowner’s claim for damages on 30th Ave NE due to road-grading. Seattle Municipal Archives Photo #45583.

At Eckstein Middle School, built in 1950 at 3003 NE 75th Street, the road was leveled but as of 1954 it was still not paved.  In the 1954 photo we see Eckstein on the right along NE 75th Street and we are looking at a high cut-away bank along 30th Ave NE.  This photo was taken by the City of Seattle Engineering Department because the homeowner filed for damages, contending that the City’s road-grading had severely altered access to the property.

While everyone likes to drive along on smooth streets, perhaps there was something to be said for Wedgwood’s former rough, unpaved, narrow, not-so-level arterials prior to the 1950s, because at that time people were not able to drive as fast as they do now.  One possible solution to the dangers of drunk drivers and speeders would be to tear up the asphalt and let the cars struggle along slowly as they did on the unpaved roads of Wedgwood in early years. 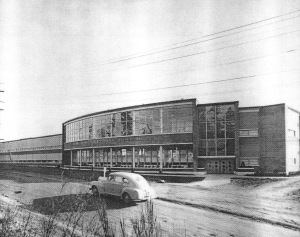 Nathan Eckstein Junior High School was built at 3003 NE 75th Street in 1950. In this 1954 photo, we see that NE 75th Street was still not paved. Perhaps it would be better to unpave our arterial streets so that people would have to drive more slowly and carefully. Photo #19254, Seattle Public Library Historical Collection.

The Puget Sound Regional Archives, Bellevue, WA, is the repository of the house photos of 1937-1940 when the first survey of all taxable structures was undertaken.  The story of the survey is show in HistoryLink Essay #3692, referenced above.

3 Responses to Street-grade: ups and downs in Wedgwood