The House in the Road

Posted on March 24, 2013 by Wedgwood in Seattle History 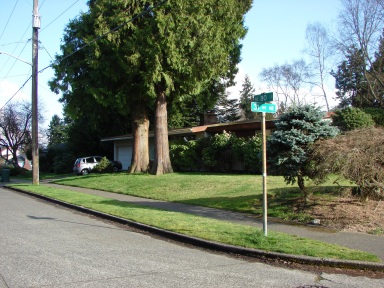 The years 1945 to 1955, from the end of World War Two until the Wedgwood neighborhood came completely into the city limits of Seattle, were years of rapid change.  The population of Seattle had swelled with war workers in the 1940s, creating a housing shortage.  After the end of the war in 1945 there was even more of an increase in housing demand, as soldiers returned from war, married and sought to establish homes.

In the 1950s in Wedgwood there was a frenzy of house-building with the associated completion of streets, but in some places in Wedgwood the once-rural roads could not easily be put through.  For two years, from 1954 to 1956, a Wedgwood homeowner fought back when the City of Seattle informed him that his house was “in the road” and would have to be moved out of the way.

A young family migrates Out West

Alfred W. Boulden was born in England and came to the USA with his parents in 1870 when he was two years old.  The family lived in Ohio and then in Michigan where Alfred married in 1894.  After Alfred and Mayme had their first son, as his parents had done before him, Alfred and his family migrated farther West.  The Bouldens came to Seattle in 1903 and spent the rest of their lives here.

For four years the Bouldens lived in Georgetown where a second son was born to them.  In 1907 the family was able to move to their own house in a remote area where the lots and the living were cheaper, the future Wedgwood neighborhood.  At that time the area had no name but the Bouldens’ new house was in the plat of the State Park Addition which had been filed by Charles H. Baker.  The city directory listing for the Bouldens’ house was “southeast corner of NE 80th Street and Charles Avenue” (later numbered 31st Ave NE.)  After house numbers came into use, the address was 3103 NE 80th Street.  The legal description of the property is Block 16, Lot 2 in the State Park Addition, in the NE quarter of Section 4, Township 25, Range 4 East.

The House in the Road was built in 1907 on NE 80th Street at the corner of 31st Ave NE. Photo courtesy of the Puget Sound Regional Archives.

Before it was Wedgwood: only a few houses in an undeveloped area

At the time the Bouldens moved to their house in 1907, it is unlikely that any of the side-streets were marked.  People would travel along 35th Ave NE which was a one-lane dirt road, and sometimes people had to walk in from 35th Ave NE to their homes, if side-streets had not been cleared through the trees.  The Bouldens’ nearest neighbors in 1907 were the Schultz and Sherman families who lived on NE 75th Street at the corners of 32nd and 34th Avenues NE respectively.  Each of those families owned up to a block of land, and the Shermans were operating a chicken farm.  It does not appear that the Bouldens did any farm-like activities but it was customary in those days for families to have a big “kitchen garden.”

It is likely that the Bouldens were early car owners, which would have eased the difficulty of living in remote Wedgwood.  Mr. Boulden’s work was in the delivery business, listed on the census of 1910 as an “expressman” which might have meant doing deliveries via horse-drawn wagon.  On the census of 1920 Mr. Boulden was listed as a truck driver, which meant a motorized vehicle.  By 1930 both Mr. Boulden and his younger son George were associated with an oil company and a chain of gas stations.  In 1930 George was 25 years old and he operated the Boyer Service Station at 24th & Boyer in Montlake.

In early Wedgwood there was no electricity or city water supply.  When house lots were sold, the boundaries of the lot were to be marked.  Homeowners would decide how to place their new house on the lot according to where the water source (a well) would be, and where streets would be at some future time when streets were put through.  In the case of the Bouldens’ house in 1907 a mistake was made, because the Bouldens’ house was later found to be placed partly out over the property line into what became NE 80th Street.  The neighborhood was still in unincorporated King County and had a very rural aspect, so no one did anything about the house until the growing years of the 1950s when NE 80th Street was to be officially put through on that block.

The 1950s: an era of development in the new Wedgwood neighborhood

By the 1950s the Bouldens were gone and the next owner of the aging, dilapidated house at 3103 was using it as a rental.  It was starting to be considered an eyesore by some, as the house was in contrast to Albert Balch’s brand-new Wedgwood development directly across on the north side of NE 80th Street.

When the time came to put through NE 80th as a completed, paved street, the City of Seattle notified the owner, Floyd Van Sant, that he was required to move the 3103 house out of the street area.  Mr. Van Sant was an electrician and apparently he felt that he was knowledgeable enough and bold enough to take on the City in a fair fight.  An article in the Wedgwood Echo community newspaper of October 1955 said that,

The City has advised counsel for Floyd Van Sant that they will not do anything about his house located at 3103 NE 80th Street.  In a test case, appealed to the Supreme Court by the City, it was decided that Van Sant owned the property upon which his house was built.  His house was inadvertently constructed in a platted street area some fifty years ago.  Prior to the decision of the Supreme Court, the City had filed an action to condemn a portion of Van Sant’s property, which action would require removal of the house from the street area, enabling completion of a sidewalk.  The street has been laid to within one foot of Van Sant’s house, creating a very dangerous condition, as pedestrians must walk in the street to get around it.  Unless the City proceeds with the condemnation action, the present hazardous condition may continue forever. 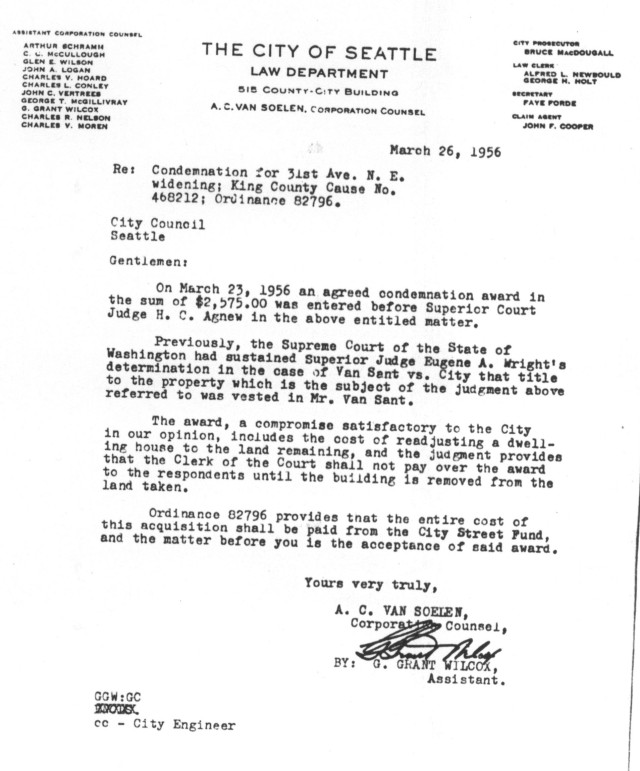 The 3103 house finally gets moved out of the road

A new house, also numbered 3103 NE 80th Street, was built in 1956, and this house was constructed properly on the lot and not in the road.  Mr. Van Sant had sold the property to Mylo Charlston who had the new house constructed for his residence.  Then in turn, this house was torn down in the year 2018 and a new one built (see photos below).

The 1950s in Wedgwood: a lot of upheaval

Although he was not a Wedgwood resident, as owner of the original 3103 house Mr. Van Sant became a folk hero to some Wedgwoodians in the 1950s who didn’t like the enormous changes in the neighborhood, from rural to urban life.  Many people felt buffeted and bruised by the rapid post-war changes in society and the bumpy process of becoming part of the City of Seattle.  Some people saw the 3103 house as a symbol of once-rural Wedgwood and they enjoyed hearing how Mr. Van Sant stood up to the City in a triumph of the little guy over bureaucracy and “progress.”

Other people felt that Mr. Van Sant was impeding progress and they wanted him to hurry up and get his eyesore house out of the road.  The story of the House in the Road is an example of the sometimes-painful growth of Wedgwood in the busy years of the 1950s.

The year 2018 and another new era of development

Prior to demolition, the fire department did practice-rescues at 3103 NE 80th Street. 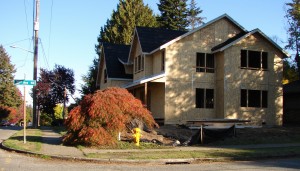 Parcel Viewer:  Use the King County property records on-line to look up an address and find what plat it is in.  Some plats in Wedgwood, such as the State Park plat which was filed in 1890, have old street names such as “Charles Ave” for what is now 31st Ave NE.  (See questions and comments below, following this article.)

Puget Sound Regional Archives, Bellevue, WA.  Original property record card for the house at 3013 NE 80th Street with a photo dated November 14, 1938, written on the right side of the photo.   Other writing on the photo gives the legal description of the State Park plat, Block 16 Lot 2.   In 1936-1940 King County undertook to photograph every existing structure for the assessment of property taxes.  From that time forward, houses were photographed soon after they were built,  so a 1952 house, for example, would have a photo on file from that year.  For houses built before 1938 the original property records of King County only have the 1938 photo.  Sometimes an earlier photo can be found in newspaper or neighborhood history records.

Seattle Street Directional Designations:  Seattle changed the directional scheme for street names in 1961, and the map on the Seattle Municipal Archives shows the designations before and after 1961.  On the 1938 property card photo shown in this blog article, the house address was written as East 80th Street.  Now it is Northeast 80th Street.

Seattle Municipal Archives, Comptroller File #228959, “Report Corporation Counsel on award in condemnation for NE 80th Street,” April 9, 1956.  File numbers are on-line; the info is on microfiche which can be read in the research room, third floor of City Hall.  I printed out the 1956 letter from the City of Seattle Law Department, shown here.

2 Responses to The House in the Road