Posted on September 29, 2016 by Wedgwood in Seattle History

In the 1930s in Seattle mountain-climbing as a sport was more influenced by one person, Wolf Bauer, than any other.  Born in Bavaria in 1912, Wolf Bauer brought his love of mountaineering and outdoor life to his participation in Boy Scouts in Seattle, and he started the tradition of practicing on Wedgwood Rock to learn mountain-climbing skills.

Copyright notice:  text and photos in this article are protected under Creative Commons Copyright.  Do not copy text or photos unless you obtain permission.

Dr. Terry Swanson of the UW stands in front of Big Rock at Coupeville, Whidbey Island. Photo courtesy of the Whidbey News-Times.

Wedgwood Rock, located at the intersection of 28th Ave NE and NE 72nd Street, stands silently in the center of a parking strip in a residential housing development.  Tests done by Dr. Terry Swanson of the University of Washington explain why the Rock is called an “erratic,” meaning that its mineral composition does not match its present surroundings.

The Rock, carried south in an Ice Age flow, most likely came from Fidalgo Island near Anacortes, Skagit County (75 miles north of Seattle), which matches the Rock in composition.  Seattle’s Wedgwood Rock has a “sibling,” Big Rock on Whidbey Island.  Testing of the mineral composition of both boulders showed that they likely came from the same source.

This photo of Wedgwood Rock may be as early as 1890. It was then called Lone Rock or Big Rock. Photo in the William F. Boyd Album, University of Washington Special Collections.

The first writings about the Rock were in 1881 when homesteaders of northeast Seattle wrote to the Daily Intelligencer newspaper to tell of their patriotic celebration picnic on the Fourth of July.  At least five of the men at that gathering were Civil War veterans who had come from other states to obtain land in Washington Territory.

The writer of the letter to the newspaper told of the ladder which the group had brought with them so that anyone who wanted to, could climb up to the top of what they called Lone Rock, on the homestead claim property of William Weedin.

The Rock in the twentieth century

The Rock became a field trip destination in the 1890s when Professor Edmond Meany of the University of Washington took his students out to see Big Rock, as it was then called.  Prof. Meany talked about how the Rock got there — the forces of ice and water which could have moved the Rock from its original location.

Professor Meany joined the Seattle outdoorsmens group, The Mountaineers, in 1908 and led the group as president for 27 years. Through connection with the Mountaineers beginning in 1929, a young Boy Scout leader, Wolf Bauer, became an innovator in teaching outdoor skills and promoting mountain sports.

Love of the mountains

Wolf Bauer joined a Scout Troop at the same time that he enrolled as a freshman at Lincoln High School, Seattle, in 1927.  Wolf was greatly influenced by the Scoutmaster who took the boys on nature hikes and caused Wolf’s love of mountains to develop even further.  At age 17 in 1929, Wolf Bauer was one of three Boy Scouts in Seattle who were awarded memberships in The Mountaineers, which gave him more opportunities to join skiing and climbing expeditions.  He already had a basic foundation in these skills from his Bavarian childhood.  Skiing and mountain-climbing were just beginning to develop as sports in the United States at that time.

In 1930 when The Mountaineers held the first downhill ski races near Stampede Pass, the top three finishers were Wolf Bauer and two other immigrants from Germany or Austria.  Professor Edmond Meany who was president of The Mountaineers Club, said that it was a “Teutonic Gang-Up.”  (p. 71, Wolf Bauer memoir, see source list below.)

Starting a tradition of climbing practice on the Big Rock

At the age of 16 and in tenth grade (1928), Wolf Bauer became the den leader for a Boy Scout troop which met at Latona School in the Wallingford neighborhood of Seattle.  Wolf began teaching them what he knew about climbing and skiing.

Wolf found that there were no exact climbing instruction courses in English so he sent to Europe for materials and began translating the training manuals from German.  He took his Boy Scouts to Big Rock, which was undeveloped at that time, on land owned by the Miller family.  After surrounding the base of the Rock with mattresses to cushion falls, Wolf began teaching basic rope work and the planning of “routes” over the Rock. (p. 92-93, Wolf Bauer memoir.)

By 1935 Wolf Bauer had developed a seven-week Basic Climbing Course that included demonstrations and field trips followed by an exam.  His students began producing reference booklets called Climbing Guides, describing climbing routes, mountain travel and safety, so that others could benefit from their pioneering work in mountain-climbing.  And always, the first practice sessions of the Basic Climbing Course were held at Big Rock. 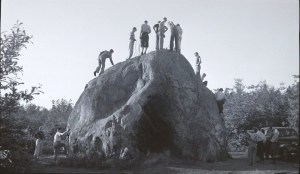 Climbing practice on the Rock circa 1941, Lloyd Anderson Collection in The Mountaineers, courtesy of Lowell Skoog, Archivist; all rights reserved; do not copy this photo.

Wolf Bauer and The Mountaineers started a rock-climbing tradition at Big Rock which continued over several generations.  Eleven years younger than Wolf Bauer, mountain climbing legend Fred Beckey’s life began in a similar manner.  Born in Germany and immigrating to Seattle, Beckey started out training on Big Rock with a Boy Scout Troop before joining The Mountaineers.

At age 16 in 1939 Fred Beckey had been taught to climb by Lloyd Anderson (the founder of REI) who was a graduate of Wolf Bauer’s first group to complete the Basic Climbing Course.  Beckey became known for climbing the unclimbable and writing about it.  Twin brothers Jim and Lou Whittaker, renowned in Pacific Northwest mountain sportsmanship, also started out with climbing practice on Wedgwood Rock in the 1940s and 1950s.

Ownership of the Rock

After the first homesteader, William Weedin, moved away from Seattle, in 1889 the property which included the Lone Rock was acquired by the Miller family.  Some of the 1920s and 1930s photos of people around Big Rock, such as the Berg family, show no trees in the background and we can presume that William Weedin had logged the timber in the 1870s, and the Miller family may have done so a second time.

This property card from the tax assessors office is meant to show the house at 7200 28th Ave NE, but of course we are more impressed with the view of the Rock in 1948.

Balch changed the name to Wedgwood Rock along with the plat name of this housing development.  The Wedgwood Rock was never officially designated as a park, and houses were built close around it.  Looming up from curbside on 28th Avenue NE, technically the Rock now belongs to the City of Seattle.

No one practices mountain-climbing at Wedgwood Rock these days, but the Rock still stands as a monument to the history of outdoor exploration in the Pacific Northwest.

Wedgwood Rock is located at 7200 28th Ave NE in Seattle. Photo by Valarie.

Special thanks to Lowell Skoog, Archivist, The Mountaineers, for his consultation and photo assistance.  Here is a recent article about Mr. Skoog’s life and legacy.

Valarie is a volunteer writer of neighborhood history in Seattle.
View all posts by Wedgwood in Seattle History →
This entry was posted in Wedgwood Rock and tagged climbing history, Neighborhood History, outdoorsmanship, Seattle, The Mountaineers. Bookmark the permalink.