Posted on March 8, 2012 by Wedgwood in Seattle History

Wedgwood Rock has a sibling:   Big Rock at 106 S. Main Street, Coupeville, Whidbey Island, about fifty miles north of Seattle.   Testing of the mineral composition of both boulders has shown that they came from Mt. Erie, Fidalgo Island, near Anacortes in Skagit County.   As with all siblings, it is best not to get into a discussion of which is the biggest – that might set off a squabble.

Research on both Rocks has been done by Dr. Terry W. Swanson, Department of Geological Sciences and Quaternary Research Center at the UW in Seattle.   The term “quaternary” refers to the time period of the most recent Ice Age, when glacial ice extended down into Washington State as far south as Olympia and Spokane.

Dr. Terry Swanson of the UW stands in front of Big Rock at Coupeville, Whidbey Island. Photo courtesy of the Whidbey News-Times.

As the Ice Sheet moved down from the north into the Puget Sound area, rocks, sediments and boulders were carried along by the glacier, then were left behind when the ice retreated.

Testing done by Dr. Swanson has shown that the mineral composition of Wedgwood Rock of Seattle and Big Rock of Coupeville both match Mt. Erie near Anacortes.   It is believed that each of these two boulders was plucked from Mt. Erie and carried along by the glacial ice flow until dropped and left behind as “orphan” rocks.   The rocks are classified as “glacial erratics,” meaning that their mineral composition does not match their present surroundings. 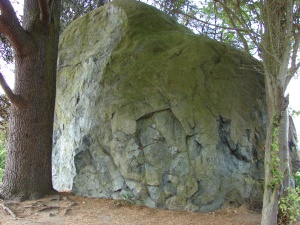 Wedgwood Rock is in a residential area, surrounded by houses built by the developer of Wedgwood, Albert Balch.   In contrast, Big Rock is on Main Street in Coupeville, in the midst of  a commercial district, but in both cases it is puzzling that the areas around the Rocks were never turned into parks.

In 1946 when Balch filed a plat for the Wedgwood Rock development, cleared the ground and started to build houses, there was a public outcry.   Balch stated that he would create a park around Wedgwood Rock, which he had renamed for the plat, but he did not follow through.   Today, there are houses directly behind Wedgwood Rock along 28th Avenue NE.

Big Rock came to the attention of Coupeville’s Town Council in 2012, as the Rock was listed for sale that year.   The parcel includes a building called Big Rock Apartments.   The Town Council consulted with the Whidbey Camano Land Trust, which suggested that the town could pursue a conservation easement to prevent destruction of the Rock.   However, the Town Council concluded that the Rock is not threatened.   It sits on the line between two pieces of property which are already developed, and the public still has access to see Big Rock.

Valarie is a volunteer writer of neighborhood history in Seattle.
View all posts by Wedgwood in Seattle History →
This entry was posted in Balch, Plat names, Wedgwood Rock and tagged Big Rock, glacial erratic. Bookmark the permalink.

2 Responses to Wedgwood Rock and Big Rock: the orphaned boulder-siblings