Posted on March 15, 2012 by Wedgwood in Seattle History

Albert Balch, the developer of Wedgwood, intended to have some park space in the neighborhood but not all of his plans were realized, as he got busy with house-building.  In 1941 Balch platted a forty-acre tract of land from 30th to 35th Avenues NE, NE 80th to 85th Streets which became the first section of Wedgwood housing.   Balch won awards for the way he sculpted streets along the curving lines of the terrain, conserving as many trees as possible in his new Wedgwood plat. 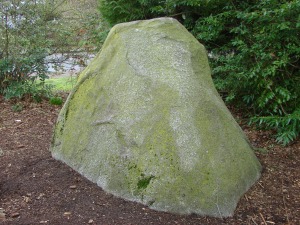 The boulder in Wedgwood Square Park at the intersection of 31st Ave NE and NE 82nd Street.

One Douglas Fir which might have been removed because it was “in the street” was spared by making it the centerpiece of a traffic island at the intersection of 31st Ave NE and NE 82nd Street.

Wedgwood’s developer, Albert Balch, dedicated this .07 acre traffic island in the July 1941 plat of Wedgwood and named it Wedgwood Square Park at 8126 31st Ave NE, making it the first official park in the neighborhood (outside of Dahl Field which technically is a playground and sports fields.)

A boulder, reminiscent of Wedgwood Rock a few blocks away, was set up at Wedgwood Square Park and plantings were done by one of the neighborhood garden clubs.   This tiny oasis is today lovingly cared for by neighbors with the annual support of the Seattle Parks Department which delivers wood chips to be spread by the volunteers.

Growth years in the Wedgwood neighborhood

Developer Albert Balch made plans to give the Wedgwood neighborhood parks, playfields and a commercial district.   In the busy post-World-War-Two years of expanding neighborhood growth, Balch began a shopping center on 35th Ave NE at NE 85th Street.   A grocery store, originally Tradewell, then Matthew’s Red Apple and now the site of QFC, opened in 1959.   In the 1960s the Wedgwood Broiler restaurant opened, which was originally named the Sir Wedgwood.   But as Balch got busier and busier with homebuilding, plans for a Wedgwood community center, parks and playground space fell by the wayside.

In 1972, near the end of his career, Balch set aside one last piece of land with the notation that it was given “for park and recreational purposes.”   Inverness Ravine Park is a 2.71 acre section of land along the banks of Maple Creek at 8619 45th Ave NE.   Nicknamed “Balch Park” by neighbors, the ravine area is hidden and is known to few.

Paucity of parks in Wedgwood

More than seventy years after Balch first began building Wedgwood, the only two official “parks” in the neighborhood are the ones he designated:  Wedgwood Square Park which is a traffic island in an intersection and the other, Inverness Ravine Park, is a virtually inaccessible ravine.

Wedgwood is thought of as a neighborhood which values its trees and green spaces, but in 2008 a report in preparation for the City of Seattle Parks Levy identified Wedgwood northeast of Dahl Playfield as a single family area which does not meet City open space standards.   The passage of the levy that year allowed for acquisition of property for new parks, facilities or trail corridors.

The potential park space at 8605 35th Ave NE once had an electrical substation (fenced, at left) and a hair salon building.    In the background across 35th Ave NE can be seen the Jasper Apartments which were under construction in 2012.

In 2008 parks activists in the Wedgwood community began work to identify a potential park space.  The former Morningside Electrical Substation site at 8605 35th Ave NE was chosen because of its accessibility, exposure to sunlight, and that the site was already owned by the City of Seattle.  However, funds would be needed to sell the property to be transferred from City Light ownership to the Parks Department.

In 2009-2011 community activists went through the arduous process of applying for the funds to acquire this property for a park.  The property was acquired by the Seattle Parks Department in 2013 but the long timeline of the process of development is not yet completed.

The long timeline for development of the site means that this potential new park in Wedgwood is still in the future.   The process slowed down because of the Park Department’s decision not to develop ANY new parks in Seattle until after a levy in 2014, to vote for money specifically for future maintenance of parks.  Following the levy it was stated that the Parks Department had created a waiting list, and Wedgwood’s turn would come in the year 2019.  Meetings were held in 2019, but as of 2020 the Park Department’s latest excuse for delay of implementation is that they “have been busy because of the coronavirus.”

The very long timeline of development

Clean-up of the potential park site at the former Morningside electrical substation, corner of NE 86th Street, began with soil testing in early 2012.  It was found that because there had been a gas station on the site in the 1950s, there was some soil contamination.  The contaminated soil was dug up and removed.

NOVEMBER 2013 UPDATE:  After a long legal timeline, in November 2013 Seattle City Light obtained authority to demolish the building at 8605 35th Ave NE.  The owner of the building (not the same person who owned the hair salon business) disputed who should be responsible for moving or the cost of demolition, so that was the reason for the long delay.  I (Valarie) got there just in time on November 26, 2013, to take photos of the demolition which began at 7:45 AM and only took ten minutes.

On November 26, 2013 the remaining building on the Morningside Substation site at 8605 35th Ave NE was demolished.  In the background through the early-morning fog can be seen the glow of the Rite-Aid sign at the corner of NE 85th Street.  At far left, the tall building is the Jasper Apartments on the east side of 35th Ave NE.  Photo by Valarie.

After the demolition of the building, soil testing and clean-up, in December 2013 ownership of the site was finally transferred from Seattle City Light to the Seattle Parks Department, using purchase funds of the Parks Levy of 2008, via Seattle City Council Bill 117982.

AUGUST 2014 UPDATE:  In August 2014, Seattle City voters approved Proposition 1, which created a Seattle Park District. One of the less contentious aspects of Proposition 1 was funding set aside for future development of fourteen land-banked park sites around Seattle. This funding includes approximately $750,000 to develop the future Wedgwood park site beginning in 2019.

While development funding was allocated for the future Wedgwood park site, park design funding was not included.

JUNE 2015 UPDATE:  While waiting for park development funds, Wedgwood volunteers applied for a Small Sparks grant from the Seattle Department of Neighborhoods.  The volunteers undertook improvements at the future park at the corner of NE 86th Street, which is called the Morningside Pocket Park.  The name “Morningside” refers to the former electrical substation which was on the site. 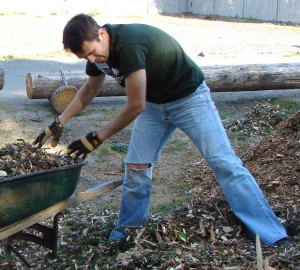 On June 27, 2015, Wedgwood volunteers set up a picnic space.  To enhance the site and encourage people to use it, community volunteers have continued to do periodic clean-up, weeding and trash pick-up.  Along with the community volunteers, the nearby businesses monitor graffiti and get it erased as quickly as possible.

Since the property at 8605 35th Ave NE is owned by the City of Seattle Parks Department, the community will work with them for future development of the site.  Parks levy money will be used for creation of a “pocket park”  but Wedgwood will have to wait its turn; the Parks Department says “our turn” for the park development will come in the year 2019.

Summer 2016:  Outdoor meeting to plan for a community festival

JULY 2017 UPDATE:  In the two years since volunteers created the picnic area at the corner of NE 86th Street, the space has been well-used.  Wedgwoodians have enjoyed having a spot to sit and sip a cup of coffee.  The picnic tables have also been used for outdoor meetings, as pictured here.

SEPTEMBER 2018 UPDATE:  The way forward on development of this pocket-park space has been difficult to determine.  At this writing, the Parks Department says that the community must raise the money to pay for design of the Morningside pocket park and submit it to them for approval!  It is difficult to maintain momentum on the project when the timeline is so long and the conditions keep changing.  It will be up to community activists to continue this process, so as to be ready with a park design when “our turn comes” in 2019.

Despite more than ten years of efforts by Wedgwood community activists, the City Parks Dept. keeps coming up with excuses for not going ahead with Wedgwood’s pocket park project.

2019 UPDATE:  The park planning process began this year with meetings for design.  A “passive park” design was discussed, for some plantings and a walking path.   Naming suggestions were taken on-line in October 2019, with the choice of name to be announced in the year 2020, when construction of the park was to begin.  See below for updates for the years 2020-2021.

2020 UPDATE:  The Seattle Parks Department has once again reneged on their statement of when Wedgwood’s pocket park will be developed.  Despite finalization of the design and on-line naming process in 2019 and that the park would be constructed in 2020, Parks now says that they have “been busy because of the coronavirus” and cannot go ahead with promised construction of Wedgwood’s pocket park this year.  They have updated the park project site to say that the park will be constructed in 2021.