Posted on May 3, 2012 by Wedgwood in Seattle History

Many aspects of Wedgwood as we know it today have been shaped by the processes of community action.   Dahl Playfield at 7700 25th Ave NE is a good example.

The story of Dahl Playfield began in 1947, when eighty parents of Cub Scout Pack 165 petitioned the city for recreational facilities.   They were joined in their effort by the Ravenna Elementary School PTA.   They realized that in an era of rapid growth, space for parks and playgrounds had to be set aside before all the land was gone.

The Picardo Farm (now known as the P-Patch) was the original site of interest for a park, but due to a fortuitous engineering error, attention shifted to the land south of the farm, known as Big Pond (or) Ravenna Swamp.

The text of this article is under a Creative Commons Copyright.  If you choose to cite the article then please include the source, and that goes for photos as well. 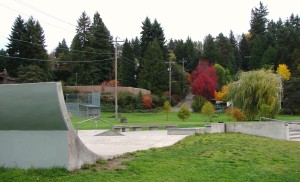 Looking eastward across Dahl Field toward NE 77th Street. There is now a skateboard structure in mid-field. Photo by Valarie, October 2019.

In the 1940s there was a complete neighborhood of two-bedroom houses along NE 77th Street, right through what is now the middle of Dahl Playfield.  The side streets of 26th and 27th Avenues NE extended all the way from NE 75th Street to 77th.

There were even some small businesses located on the streets, such as Fred Rasmussen’s auto repair garage at 7550 27th Ave NE (an address at the intersection of NE 77th Street & 27th, at about where the skate park is now.)

Between 25th and 28th Avenues NE, NE 77th Street was unpaved.  This was fine in Seattle’s “dry season” of July and August, but for much of the rest of the year NE 77th Street had standing water and residents had to park their cars at a distance or risk getting mired in the muck.   No one seemed to realize that NE 77th Street was literally floating on the surface of a peat bog, despite the fact that the area had earlier been referred to as Big Pond (or) Ravenna Swamp.   The houses were on septic system, not hooked up to a sewer line.

Becoming part of the City of Seattle

The residents in the little community around NE 77th Street looked forward to their neighborhood becoming part of the City of Seattle because they thought that the answer to the muddy conditions was for the City to bring in drainage and sewer lines.

With NE 77th Street in the foreground, this house was once at 2519 (near what is now the rock garden at Dahl Playfield.) Photo courtesy of the Hatfield family, used by permission.

In the late 1940s, after the end of World War Two, the City of Seattle began to move its city limits out to northern neighborhoods such as Wedgwood.   Street paving and digging for sewer lines began along 25th Ave NE, to extend the arterial.

The City of Seattle engineers did not realize that the entire area was a peat bog.  When water was pumped out of the sewer-line trenches along 25th Ave NE, it resulted in the collapse of the soil and the sinking of houses which had been built in the 1920s-1930s on what is now Dahl field.   Some of the houses slid off of their foundations, split in half and were a complete loss.

In his investigation for the city, R.W. Finke, city engineer, wrote:

“Claims totaling $5500 have been filed against the city for damage to the houses within the area by reason of the sewer construction.  The unwatering of the sewer trenches produced some subsidence (sinking) in the peat for distances a great as 100 feet from the trenches.  The taking of the area for playfield purposes will eliminate the necessity for settling or contesting these claims.  Considering the many economies which will result, it is our opinion that the site south of East 80th Street is preferable to the Picardo tract (for use as a playfield.)  August 30, 1949.”

Action was taken quickly.   Only two months later, the City condemned the land (an action known as eminent domain) and designated it for use as a park and playground.   It was first known as East 80th Street Playfield.

Beginning the development of the playfield at East 80th Street 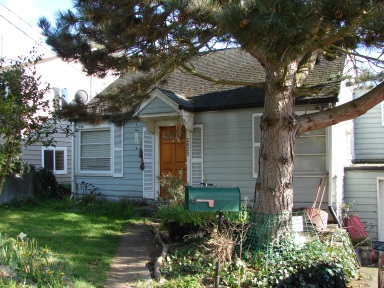 Development of the playfield proceeded slowly and painfully for five years.  The first three years included time to allow homeowners to move their houses if possible, or reimburse them for damages.  Time was spent in court with appeals and objections by property owners adjacent to the proposed park.

In addition to the damaged homes, one resident sued the city for breach of contract because he had been allowed to graze his horse on the field, and felt he should also be reimbursed for loss of access.

There are three houses which were able to be moved off of the site, which are now located at 2609, 2615, and 2625 NE 82nd Street.  See source list below, for property record info for these houses. 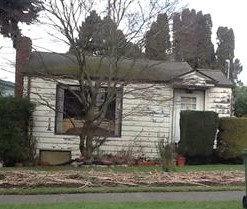 Another house moved off the site of Dahl Field is now at 3906 NE 70th Street, about a mile east of Dahl Field.  This house was originally numbered 7544 26th Ave NE and was built in 1946, less than three years before the site was designated for use as a park and playfield, with the requirement that houses be moved.

Another development delay:  a peat fire

In 1952 a smoldering fire burned for several weeks in the underlying peat at Dahl Field and neither the Fire Department nor the Parks Department was able to extinguish it.

The surface in some burned-out sections of the field dropped four to five feet and the park was closed for safety reasons.   The City decided to remove the peat and replace it with fill dirt before development could proceed.

Naming the field and finishing it in the 1950s

In 1955, the Park Board named Dahl Playfield to honor a former director, Waldo J. Dahl.   Although Dahl was not directly associated with the playground, he had worked on numerous civic projects and helped to develop recreation facilities throughout the city, and the parks department wanted to honor him.

By the end of the 1950s an estimated 75,000 cubic yards of peat had been removed from about half the field and replaced with fill dirt.  Use of the field for ball games had begun and a shelter house, sprinkler system and some play equipment had been installed.

A new willow tree was installed at Dahl Field as part of new landscaping in 2006.

In July 1989 Wedgwood’s Dahl Field Committee applied for a $16,000 neighborhood matching grant and additional funds were raised by soliciting individual donations.  The money was used to plant trees and grassy areas, install a walking promenade, buy picnic tables and make improvements to the playground area.

The year 2006 marked the completion of the largest renovation of Dahl Playfield since it was created.   Led by the Friends of Dahl Playfield in a grant-funded effort, all of the play areas were reconfigured and new equipment was installed.

During the upgrade process, landscape architects designed drainage areas with natural plantings.  The well-known willow tree in the center of the field was removed at the time of this re-landscaping because the tree, with its heavy branches, had become hazardous.  It was replaced with a smaller tree whose roots help to absorb the water on the field.

The Seattle Parks Department has to juggle competing demands for the use of public space in parks and playfields, such as use of ball fields.  Community surveys in Wedgwood have shown that some people want a more park-like atmosphere at Dahl Field, with trees, benches and picnic areas, while others would like to see development of current passive-use sections of the park to relieve the pressure on the existing baseball and soccer fields.

One thing is certain: The future of Dahl Playfield will be determined by continued community involvement in promoting the best use of the land.

Seattle Municipal Archives:  some photos are on-line at this page, and some are on their Flickr page.

Seattle City Ordinance 78604, Condemnation and Acquisition of Land for Park Purposes, in the Seattle Municipal Archives, on-line list of legislation and ordinances.

Puget Sound Regional Archives:  the repository of the property records of King County.  When a house has been moved, the original property card is retained, showing both addresses as illustrated in the photo below.  A house at 7753 26th Ave NE, built in 1927 on the present site of Dahl Field, was moved to 2609 NE 82nd Street in about 1950.

Two other houses which were moved are now at 2615 and 2625 NE 82nd Street and they have property records similar to the one shown here for 2609 NE 82nd Street.  Records are filed under plat names, so this house is now in “Picardo’s First Addition.”  That is the land on the south side of NE 82nd Street, which is a strip of land formerly part of the Picardo Farm.

Property card showing that a house which was at 7753 26th Ave NE, present site of Dahl Field, was moved to 2609 NE 82nd Street.  Photo courtesy of the Puget Sound Regional Archives, repository of the property records of King County.