From Ravenna to LaVilla: the NE Seattle Tool Library

Posted on May 2, 2018 by Wedgwood in Seattle History

The NE Seattle Tool Library is a community-based nonprofit organization for sharing tools and knowledge of how-to-fix-it.  The Tool Library has been very successful in its mission and in June 2018 it moved from its original site, 2415 NE 80th Street, to 10228 Fischer Place NE in the historic LaVilla Dairy Building.  But only a year later, the LaVilla Dairy Building was put up for sale.  Now as of January 2020, the Tool Library can continue to use this location for only a maximum of one year, and then they will have to move again.  Contact them if you know of a building for rent or one that they could purchase.

The NE Seattle Tool Library started at this building just west of 25th Ave NE, west of the Picardo P-Patch.

The first location of the NE Seattle Tool Library was in a building pictured at right, 2415 NE 80th Street, owned by the adjacent North Seattle Friends Church.

Long-time neighborhood residents will remember that in the 1950s and 1960s, the building was a small convenience store.   After the store closed in about 1970, the building was acquired by the nearby North Seattle Friends Church and was used as a youth annex for their programs.

In 2016 this building was sold to a nearby private school, University Preparatory Academy, and the NE Seattle Tool Library began its search for a new site.

In June 2018 the NE Seattle Tool Library moved to the historic LaVilla Dairy Building at 10228 Fischer Place NE.  Fischer Place NE angles northeastward off of Lake City Way NE at NE 102nd Street, and goes through to connect with Ravenna Way NE.  The road was created in the 1920s by Ole Blindheim and was named in tribute to his father-in-law, August Fischer.

The Fischer-Blindheim legacy in Meadowbrook

The footprint of the former Maple Leaf School is outlined by this parking lot at the corner of NE 100th Street and 32nd Ave NE. The parking lot is used by Maple Leaf Lutheran Church.

August Fischer was a German immigrant who prospered as a carpenter in Seattle in the 1880s.  In the 1890s he moved his family to the remote northeast Seattle land which was sometimes called German Hill, because of other immigrants who were farmers around the same area.  The Fischers acquired land from the Beckers, from NE 100th to 110th Streets which included the valley which is the present site of Nathan Hale High School.

The Fischers were part of a close-knit community which worked together in early days to obtain schooling for their children.  The brick Maple Leaf School (no longer extant), built in 1926 at the corner of NE 100th Street & 32nd Ave NE, was on land which the Fischers had donated for that school.

Maple Leaf School was at the northeast corner of NE 100th Street and 32nd Ave NE.

In the 1890s two families, the Fischers and the Ohlands, founded the first Maple Leaf School which met in an old sawmill camp building on the shore of Lake Washington at about NE 100th Street.  That site on the lake shore had been called LaVilla after a real estate development in that area of northeast Seattle.

Then the second location of the Maple Leaf School was a two-room wood-frame building just east of 35th Ave NE at the southeast corner of NE 105th Street.  This building served until the third location, the brick school, was built in 1926 on NE 100th Street. 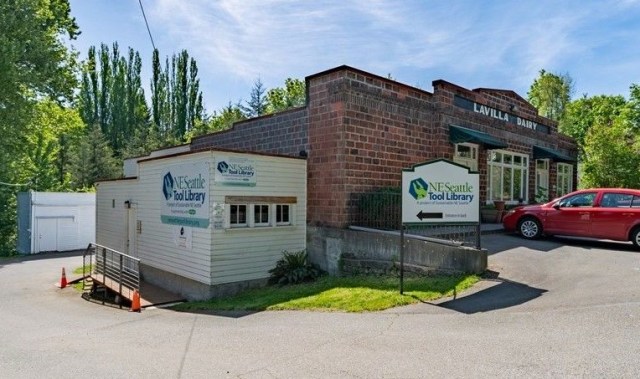 When Ole Blindheim built his dairy processing plant on Fischer Place NE in the 1920s, he named it LaVilla in tribute to the Lake Washington dock landing which he had known and used, even though his dairy building was not at that site.

The name Meadowbrook, which is the current name of the neighborhood where the LaVilla Dairy building is located, did not come into use for many decades, until after a golf course named Meadowbrook began in 1932.  The golf course was on the present site of Nathan Hale High School.

Land along the creek behind the LaVilla Dairy building has been designated as open space.

August Fischer gave portions of his farm property to each of his eight children, and the Blindheims received the westernmost section which today is the LaVilla Dairy building and the house next door to it to the south.  The house was the home of Ole and Anna Blindheim (Anna was one of the eight Fischer children.)

Behind the LaVilla Dairy building, the natural area along one of the tributaries of Thornton Creek was sold to the City of Seattle in 1993 for preservation. 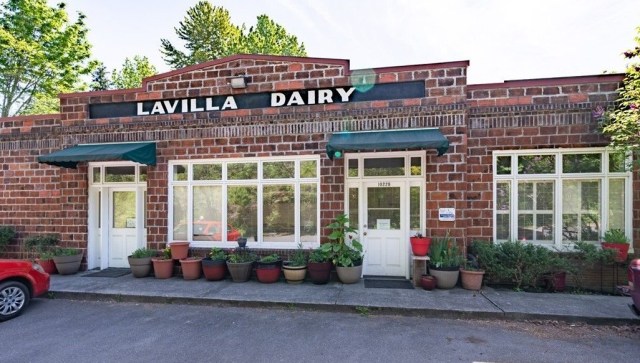 Valarie is a volunteer writer of neighborhood history in Seattle.
View all posts by Wedgwood in Seattle History →
This entry was posted in Meadowbrook neighborhood, name of the neighborhood and tagged Fischer Place NE, LaVilla, Neighborhood History, Seattle, Sustainability. Bookmark the permalink.