Requiem for the Big Green House

Posted on January 25, 2015 by Wedgwood in Seattle History 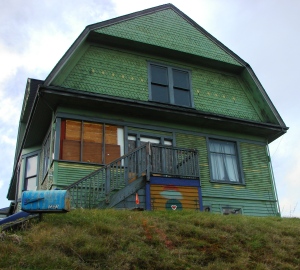 The Big Green House at 7321 35th Ave NE is boarded up and awaiting demolition.

Some neighborhoods of Seattle have any number of houses which are one hundred years old or older, but in Wedgwood the number of hundred-year-old houses is very small.   One was the Big Green House at 7321 35th Ave NE which continued to stand while the arterial 35th Avenue NE became increasingly dominated by commercial structures.

A developer had owned the site since 2002 but he never went forward with redevelopment plans.  Finally he sold the site to another developer and demolition took place on February 17, 2015, to replace the Big Green House with a cluster of townhouses.

Wedgwood is a neighborhood of northeast Seattle which was very thinly populated and was outside the Seattle City Limits until after World War Two.  When the war ended in 1945, demand for housing jumped as soldiers returned to civilian life, married and started families.  For that reason Wedgwood has a large number of houses built in the 1940s and later.  On some streets one can see a few old houses from 1910-1930 with “infill” where newer houses from 1940+ have filled up the lots.  The Big Green House is on what later became a major arterial, 35th Avenue NE, and the house stood alone as a residential structure surrounded by storefront buildings. 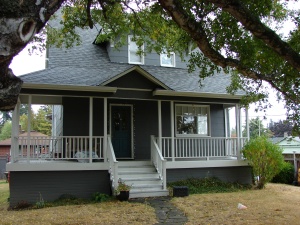 The house built by Gustav Morris in 1910 is in good condition.  It is one of the examples of smaller houses built in that early era before Wedgwood had electricity.

In the early 1900s Wedgwood did not yet have a neighborhood name and there were very few people living in the area.  Some of the earliest residents I have been able to trace include the Lores Goodwin family at 3248 NE 89th Street, shown already living there as of the census of 1910.  Charlie & Lottie Schultz of 3202 NE 75th Street started out with a smaller house and expanded when they had the money.

Gustav Morris, an ethnic German who was a native of Latvia, travelled the world on ships before becoming a bridge carpenter in Seattle.  Morris built his own house at 7500 43rd Ave NE in 1910 and today the exterior of the house is still very much as same as originally built.

The above-mentioned houses, built around 1910, started out small.  Some old houses in Wedgwood have been modernized on the interior like the Morris house, expanded like the Schultz house or entirely rebuilt like the Goodwin house.  Houses in early Wedgwood were small because the owners were of limited financial means, and also because of the difficulties of heating by using only a wood or coal stove.  Fewer rooms meant less expense for heating.  There was no electricity to run furnaces in Wedgwood houses until 1926. 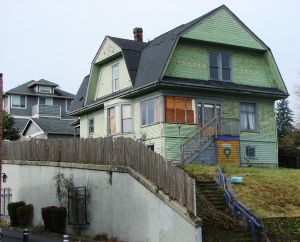 The Big Green House loomed up high over 35th Ave NE, until its demolition in 2015. Behind it on 34th Ave NE can be seen a house built by the developer in 2002 when he subdivided the original lot.

An early Wedgwood-area structure which breaks the “small house” rule was the Big Green House at 7321 35th Ave NE.  It was built about 1910-11, though an exact date can’t be established due to the lack of a construction permit.

According to census listings William Voss, who built the house, was still living in the University District as of April 1910.  Property records show that Voss bought the land in 1910 so we can speculate that construction of the Big Green House began later in that year, or in 1911.

William Voss bought several contiguous lots and it is likely that he first built a smaller house nearby at 7318 34th Ave NE where he, his wife Ida and their two teenage sons could live while Voss built the Big Green House.

The question that hasn’t been answered is why Voss built such a large house at 7321 35th Ave NE.  There is no indication that Voss intended to make the house into a hotel, a store or other commercial structure.  As a former hotel-keeper himself, Voss would have known that for the convenience of travelers, a hotel needed to be close to transportation terminals such as a railroad station.   The Big Green House was very isolated, not in a convenient location, and there were no transportation systems such as a streetcar nearby. 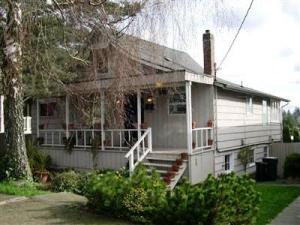 In the wintertime the Voss family used to retreat to the house at 7318 34th Ave NE because it was smaller and easier to heat. It is likely that William Voss built this house first, in 1911.

William Voss was a German immigrant who first came to live with his brother in Illinois in the 1880s.  Voss married, and with his family gradually migrated westward across the United States, where he spent the last 25 years of his life in Seattle.

Certainly if Voss was not satisfied with the Big Green House, he could have moved to a smaller one.  There are several houses on 34th Ave NE, including 7318, which were on lots owned by Voss and were built in the period 1911 to 1916.  We can speculate that Voss may have built these houses and sold them for income.  The Voss family retained ownership of 7318 34th Ave NE and according to the recollections of William Voss’ daughter Gerda, the family used to move into that house in the wintertime because it was smaller and easier to heat.

In its hundred-year history the Big Green House had surprisingly few owners.  After the death of William Voss in 1930, ownership of the house stayed in the family for more than fifteen additional years.  By the 1950s the house had new owners, the Matau family.  In 1959, only a few months after the birth of her third child, Elizabeth Matau died of cancer at age 39.  Her husband Dennis Matau was left with a six-month-old baby boy and an older son and daughter.  He sent for his mother who came and kept house for him and helped raise the children.  Mr. Matau never remarried and he lived in the Big Green House until his death in 2001.  An electrician by trade, Mr. Matau “apartmentized” the house by separating the second floor with its own kitchen and bath, so that Mr. Matau could have renters while living in his own section of the house. 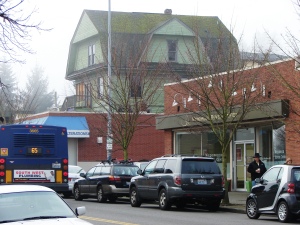 The Big Green House was hemmed in by commercial development on both sides.

With the growth of the Wedgwood neighborhood beginning in the post-war years of the 1940s the Big Green House gradually became surrounded by commercial development.  The house was a startling break in the expanse of apartment buildings, grocery stores, banks and other commercial buildings along 35th Avenue NE.

After the death of Dennis Matau, the Big Green House was bought by a developer, Sam Brace, in 2002.  Brace kept renters in the house.  He many times applied for permits to tear down the house but then nothing happened.  After Brace finally sold the house to another developer, demolition took place on February 17, 2015.

Some people questioned whether the Big Green House was eligible for historic preservation.  Though the house was old, the criteria for “landmarking” in Seattle includes important architecture or significant events in Seattle history, so the Big Green House, while unique in Wedgwood, did not meet the City of Seattle standards for historic preservation. 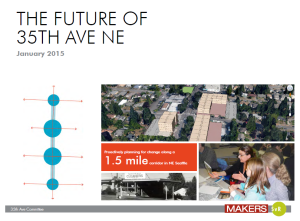 The death of the Big Green House was a major transition which symbolized the current trends in the commercial district along 35th Avenue NE between NE 65th to 95th Streets.  We have continued to see tear-downs of more of the older buildings along 35th Avenue NE and the construction of new, higher-density developments.

Concerns about zoning and development issues were the reasons that neighborhood activists joined forces for the Future of 35th Ave NE Project, completed with publication in January 2015. This plan was intended to provide a proactive, community-developed framework to help shape future change along 35th Avenue NE so that new development better meets the needs of the surrounding neighborhoods.  The plan was presented to City Council with a plea to adjust the zoning along 35th Avenue NE to create storefronts, not townhouses.  But City Council has never acted on the proposal.

As we bid “farewell” to the Big Green House we remember the history of a bygone era when Wedgwood was “out in the country,” was sparsely populated and outside of the Seattle City Limits.  The demise of the house symbolizes the new, challenging era of rebuilding and urbanized lifestyles in Seattle neighborhoods.  After being demolished in February 2015 the Big Green House was replaced with townhouses, the exact thing which the Future of 35th Project expressed that the neighborhood does NOT want.  What is wanted by the neighborhood is storefront buildings to enhance the commercial zone along the arterial. 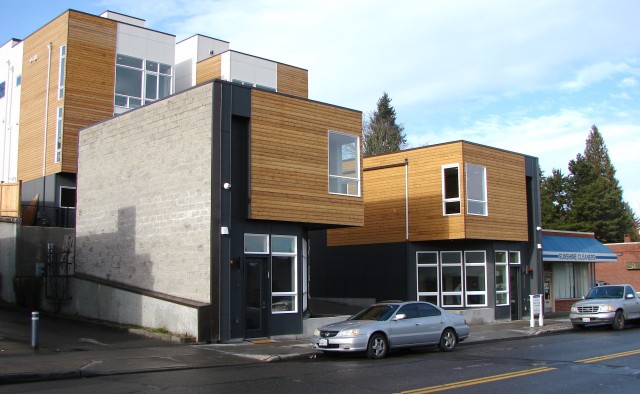 New townhouses stand in the former site of the Big Green House as of January 2016.

7 Responses to Requiem for the Big Green House