The Scout Camp in Wedgwood

Posted on February 27, 2012 by Wedgwood in Seattle History

In the 1920s more people began to move into the Wedgwood area but there were still many large tracts of vacant, undeveloped land.  Sometime during those early years Scouts began going to Wedgwood’s Maple Creek Ravine for camping and climbing practice, led by Scoutmaster Clark E. Schurman.

The heavily-treed Maple Creek area is from NE 88th to 92nd Streets between 40th to 45th Avenues NE, with the creek flowing in a deep Y-shaped ravine.

Early residents in or near the Maple Creek Ravine

In 1919 Laurette Stanley and her son Charley built a house at 3848 NE 89th Street, on the west edge above the Maple Creek Ravine.  Mrs. Stanley was then seventy years old but she would have another twenty-five years of activism in her new neighborhood.

Mrs. Stanley made contact with the Scouts and invited them to use the area for wilderness outings.  In the 1920s Scout leader Clark Schurman began bringing Troop 65 to camp, climb and cook outdoors at the ravine.   They called it Camp Stanley.  The Scout camp at the Maple Creek ravine had wooden platforms for pitching tents, scaffolding in the trees for climbing practice, and an outdoor kitchen cookout area like those of today’s national parks.

Though no memorial has been left for him in Wedgwood, Clark E. Schurman is remembered as the scoutmaster who led camping adventures in the woods of Maple Creek beginning in 1923 or just before.  It may be that this was where he first developed the idea of a dedicated climbing structure, which he had built at Camp Long in 1938. 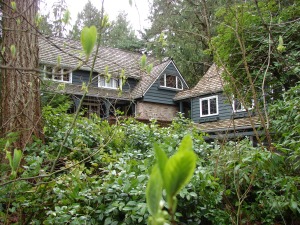 In 1936 the Rogers purchased fifteen acres at Maple Creek and built a house at 8915 – 42nd Ave NE.   This house, which is still standing, is centrally located on a relatively flat plane in-between the Y-shaped ravine with its creek.

Mrs. Rogers had first discovered Maple Creek years earlier while riding her horse along bridle trails, looking for yew branches to use for making an archery bow.  After the Rogers built their house at Maple Creek they continued to permit Scout troops to camp on their land, and they protected the ravine, its streams and trees from development until the 1950s.

When the Rogers began to sell house lots near theirs, they looked for like-minded people, like Bob & Martha Cram, who were willing to help preserve the natural environment and continue the Maple Creek Ravine legacy.

A house in the woods

On the east side of the road, across from the Rogers’ estate, in 1933 a house was built at 8916 – 42nd Ave NE.  The property tax assessment photo of 1938 shows a cabin-like structure with a log entrance gate.

A 1938 photo of the house which is now numbered 8916 42nd Ave NE in the Maple Creek Ravine. Manhattan Heights is the plat name. Photo courtesy of the Puget Sound Regional Archives.

Neighborhood rumor is that the house at 8916 – 42nd Ave NE started out as the Scouts’ cook shelter and was expanded and built up from that.  On the 1938 property tax records the house was listed as a summer home.   Its original materials were split cedar log siding with floors and interior trim of knotty pine.

The 8916 house was sold in August 1939 for $1594.24.   The buyer and seller were two men who had been active Scout leaders.  Their names were mentioned in newspaper articles about Scouts’ activities in the 1930s,  including Troop 153 which met at Green Lake School.  In the city directory each man is listed in north Seattle, but neither man was ever listed as living at the 8916 house.  Perhaps it is true that the 8916 house started out as a cooking shelter for the Scout camp, and that it was eventually built up into a permanent structure, but perhaps only as a summer house.

The 8916 house was remodelled in 1956:  the house was expanded from three rooms to six, and a brick veneer was added.  But even in the 1956 remodel, the house was not hooked up to the city sewer line.

In 2012 the owner of the 8916 house completed a three-year process to obtain permission to subdivide the lot and build new houses.   Neighbors had opposed the application for environmental reasons, in an effort to preserve trees and the rural character of Maple Creek.

The final decision of Seattle’s Department of Planning and Development came on January 26, 2012, granting permission to divide the lot so that one new house can be built to the east of 8916.  The .65 acre lot is more than enough footage for the present 8916 house and one new house.

On the north side of the 8916 house can be seen its split-log Rustic Revival style of construction.

Plans were to keep the 8916 house as-is, but the owner was required to hook up the house to the city sewer at the same time that utilities were extended for a new house on the other parcel.  The side-sewer work on the 8916 house was completed in November 2013.

Schurman Rock: A History & Guide, by Jeff Smoot, 2018.  References to Camp Stanley are on pages 17, 47 and 52.  The author quotes from a 1938 magazine article written by Clark Schurman where Schurman described Camp Stanley as having a “useful mountaineering gym” of a wooden climbing wall and scaffolding on trees, which Schurman used to teach safe climbing techniques.

Valarie is a volunteer writer of neighborhood history in Seattle.
View all posts by Wedgwood in Seattle History →
This entry was posted in 8916 42nd Ave NE, Houses, Maple Creek ravine and tagged Camp Stanley in the Maple Creek Ravine, Neighborhood History, Seattle. Bookmark the permalink.