Growing Up with Balch

Posted on February 7, 2012 by Wedgwood in Seattle History

Bert’s father, Albert Balch, was the real estate developer who became known as the “father” of the View Ridge and Wedgwood neighborhoods.  In that summer of 1953 house-building was going on throughout the two developments and the three boys used construction roads for their driving practice.  Bert Balch did get caught and ticketed for underage driving, however, one day when he ventured to Green Lake. 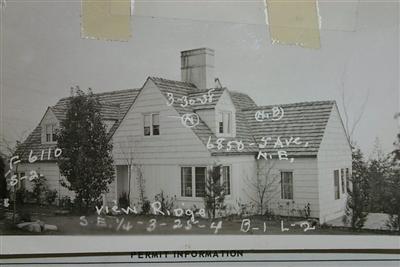 The three teens became totally consumed with their car hobby.  Terry and Jon began buying old cars for $10 or less, driving them for a while, selling them and buying more, such as a 1921 Dodge and a 1916 Studebaker.

Bert Balch took over his family’s garage to work on old cars and his father, Albert Balch, had to park his Lincoln outside.  The Balch home was at 6850 50th Ave NE, the southeast corner of 50th Ave NE and NE 70th Street, where the three boys used to push their old cars down the steep hill to get the cars started.

Looking eastward down the steep slope of NE 70th Street, this photo is taken at about 56th Ave NE.   The Balch family home was at the corner of 50th Ave NE, even higher than this view.  When working on old cars, Bert Balch and his friends the Jarvis brothers, would push the cars down this hill to get them started.  Photo of the year 1966, courtesy of the Seattle Municipal Archives, Item 177131.

Association with the Balch family led to work opportunities for Jon and Terry Jarvis.  During their summers in college they helped with Balch’s building projects or worked in the main construction and real estate office.  At Christmastime the boys cut trees in Redmond, brought the trees to Wedgwood and sold them from a vacant lot Balch owned on 35th Ave NE at NE 85th Street (present site of the Wedgwood QFC grocery store.)  The lot was used only for parking and storage of Balch’s construction equipment up until 1959 when the first grocery store (Tradewell) was built on the site.  Later, Albert Balch invited the Hunter family to sell their Christmas trees at the present site of the grocery store at NE 85th Street, and that is how the Hunters got their start in the Wedgwood neighborhood.

The boys’ interest in all things mechanical led to life-long occupations.  Bert opened a lock-and-key business specializing in Balch houses.  Terry and Jon’s car obsession grew into a business for them.  In 1960 they opened Vintage Auto Parts, with the most complete stock of antique auto parts in the world.

We are thankful that over the years Jon Jarvis shared his wonderful memories and perspectives on his home neighborhood of Wedgwood.

Valarie is a volunteer writer of neighborhood history in Seattle.
View all posts by Wedgwood in Seattle History →
This entry was posted in Balch and tagged 1950's in Wedgwood, classic cars, Seattle. Bookmark the permalink.