The House that Flew to Wedgwood

Posted on February 4, 2012 by Wedgwood in Seattle History

In the summer of 1959 I (Valarie) was among a group of Wedgwood neighborhood children who clustered on the sidewalk to watch a house being moved, maneuvered and set into place.  The house went onto a sloping lot at the corner of NE 90th Street with the front of the house facing 25th Pl NE.  The back was positioned for access to the basement garage from 25th Ave NE.  The house was given the address 8921 – 25th Pl NE.  Like Dorothy’s house which flew from Kansas to Oz, the 8921 house seemed to have flown in from another world.  The house’s age, composition and design were completely different from the 1940s and 1950s houses around it in Wedgwood.

The 8921 house began its life in 1929 as 5816 – 5th Ave NE.  Even then, on 5th Ave NE at the edge of the Wallingford/Roosevelt districts, the house was unlike its neighboring houses.  It was the only house on the east side of 5th Ave NE in that block.  Across the street were four “ordinary” houses of simple frame construction. The census of 1930 listed the occupants of those houses as people with middle-income jobs such as painters and salesmen.   In contrast, the 5816 house had a brick veneer, hardwood floors and mahogany finishes, implying that the house was suitable for a person of higher income.   It cost $5000 to build, a tidy sum in the 1929 economy.   The inclusion of a garage indicated that the house was designed for a homeowner who could afford a car. 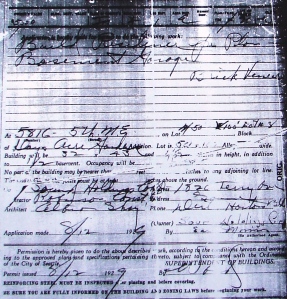 The 5816 house was built “on spec,” meaning that it was not commissioned by a client; the builder intended to offer the house for sale when finished.  Information on the original construction permit shows that the 5816 house builder and owner, Hector Robson, was a contractor who worked with architects to build high-quality homes.

House-builder Hector Robson was the third son of English immigrants.  His father was a contractor and the sons spent time working as bricklayers before becoming contractors themselves.   The Robson family’s affinity for English-style homes of brick construction may have helped bring about their partnership with architect Alban Shay.  The architectural plans for the 5816 house were by Shay, who was known for classic English Tudor-cottage brick or stucco houses in upscale Seattle neighborhoods such as Broadmoor, Mt. Baker and Seward Park.

Hector Robson listed the 5816 house for sale in March 1930, but it didn’t sell.  The stock market crash of October 1929 had set off a national economic crisis called the Great Depression, and higher-priced houses had no takers.  Eventually Robson offered the 5816 house for rent.

Kansas newcomers come to live in the 5816 house

Out in Crawford County in the southeastern corner of Kansas, Meade & Julia Hargiss were getting tired of their small town, tired of farming and tired of the Depression.  They’d had their eye on Seattle for some years, hearing reports of Seattle’s vigorous economy and varied job opportunities.  Meade & Julia were in their mid-thirties with two young sons, and they didn’t want to stay in Kansas and let life pass them by.  They were ready to leave all they had known and start a new life in Seattle in 1930.

A 2013 real estate sales photo of the house at 8921 25th Place NE shows the living and dining rooms.

In Seattle the Hargiss family found plenty of rentals available, and they moved into the spacious new house at 5816 – 5th Ave NE.  Meade tried a variety of jobs and also took classes at the University of Washington.  Because he’d had some teaching experience, in 1933 Meade was able to get a job as education director with the local Civilian Conservation Corps, part of the New Deal jobs program put in place by President Franklin D. Roosevelt.

The Great Depression dragged on and it was common for people to move frequently in search of lower rent.  The Hargiss family moved to a cheaper house while their sons attended Roosevelt High School, and the 5816 house had a constant turnover of renters.  It was not until after World War Two that the house became owner-occupied.   A young married couple moved into 5816 in 1954 and hoped to stay there the rest of their lives.  The Fritz family did stay in their house, but they were only able to do this by moving the house out of the path of the I-5 freeway construction in 1959.

A great deal of house-moving took place in the years following World War Two.  An article in the Seattle Daily Times of June 16, 1946, stated that the extreme housing shortage following the war caused houses to be valued instead of wasting them by tearing them down.   Moving companies would buy unwanted houses and take them to a sales lot not unlike a car lot, where buyers could select a house and have it moved to a new site.

Another cause of house-moving in Seattle in the 1940s and 1950s was the expansion and widening of city streets and the creation of the freeway.  It was most common for houses to be moved only a couple of blocks, but the 5816 house traveled more than three miles in order to find the right lot placement for it.  Since the house had originally been built on a corner lot with a lower-level entrance to the garage, a similar lot placement had to be found and graded to accept the form of the house.  That is how the site at the corner of NE 90th Street and 25th Pl NE was chosen as the Fritz family’s new home.

In the 1940s Meade Hargiss became a building contractor and helped construct houses all over North Seattle.  He made his home in Hawthorne Hills and he was acquainted with Albert Balch, the developer of the Wedgwood neighborhood.  The two men worked together as officers in the Master Builders Association.   But Meade Hargiss never knew that his first home upon arrival in Seattle, the 5816 house, had flown away to Wedgwood. 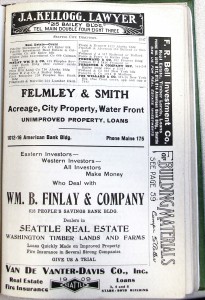 Family info:  The Fritz family who had the house moved in 1959 made a home movie of the moving process: https://youtu.be/XXi6SXD44LE

Property card, showing previous and present addresses of the 8921 house and the date of the house-move;  accessed 10/7/2011 at the Puget Sound Regional Archives, Bellevue, WA.

Property records show that four houses on 5th Ave NE are the same four houses which were there in 1930 and later survived construction of the freeway:  house numbers 5801, 5805, 5807, 5811.  These houses now sit up high on the west side of the freeway.

After being set in place at 8921 25th Pl NE, the house needed to be re-bricked and a retaining wall was built on the north side to protect the yard.  Photo courtesy of the Fritz family.

2 Responses to The House that Flew to Wedgwood