One Hundred Years in the Wedgwood Business District

Posted on September 3, 2022 by Wedgwood in Seattle History 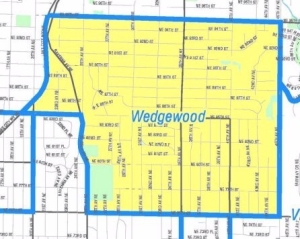 The year 2022 marks one hundred years since the first store opened in what is now defined as the Wedgwood neighborhood, between NE 75th to 95th Streets in northeast Seattle.

The north-south arterial 35th Ave NE is the central core of Wedgwood with its main business district at the intersection of NE 85th Street.

This blog article will give a capsule history of business in Wedgwood and a preview of the changes that are coming as the commercial district at NE 85th Street faces redevelopment.

The late-developing northeast region of Seattle

At what is now downtown Seattle, white settlers first built their cabins in 1852.  More than seventy years after that city-founding date, as of the 1920s northeast Seattle still had very few residents. 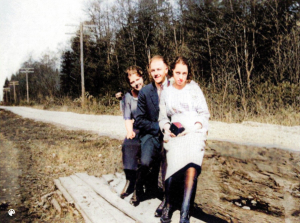 Up until the 1920s, the few residents of what is now Wedgwood had to do without electricity, running water and roads.  The main road was 35th Ave NE which was more like a path, as it was unpaved.

Even in those early days some Wedgwood-area residents had cars, but because side-streets were not put through, they might leave their car close to 35th to avoid getting stuck in the mud.  One early resident, Dorothy who lived at the corner of NE 80th Street, told me that one car per day would come along 35th Ave NE.

The first store in Wedgwood

In the 1920s the future Wedgwood neighborhood was settled by a number of immigrants who were looking for a place to gain a foothold.  One was the Jacklin family, ethnic Russians who had spent about ten years in Latouche, Alaska, before coming to Seattle.

In 1918 the Jacklins completed a house at 7528 35th Ave NE and in 1922 they opened a little grocery store in what is now the garage next to the house.  This was the first store in the (future) Wedgwood, a  neighborhood which didn’t have a name at that time.

The Jacklins owned most of that block from the corner of NE 75th to 77th Streets.  The Jacklins kept chickens and two cows on-site.  At their store they sold milk for ten cents per quart.  They sold chickens, eggs, and a few other basics.

The next Wedgwood family to open an enterprise were the Shauers in the 8501 block, present site of commercial buildings including the Wedgwood Ale House and a bank.  Like the Jacklin family, in the 1920s the Shauers began keeping chickens to sell along with eggs. They expanded their business into a real store building and added a gas pump. 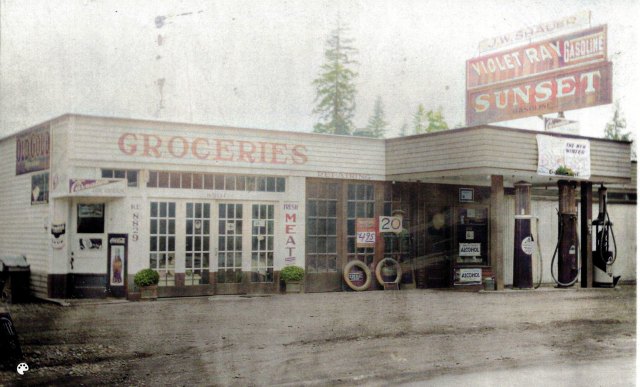 The Shauer’s store and gas station in the 1920s.

In 1933 the federal government began easing out of Prohibition by allowing the sale of three-two beer (3.2% alcohol).  The Shauer family opened a café and hired Charlie Hofsvang and his wife to tend the grocery store and café/beer parlor.  The Hofsvang family lived as tenants in a house behind the café in what is now the parking lot behind the Wedgwood Ale House.

The Wedgwood Ale House at 8515 35th Ave NE is in the same space as Mr. Shauer’s old store and gas station. The Wells Fargo Bank is on the site of the Shauer’s house at the north corner of the block.  Photo by Valarie.

The Shauer café & beer parlor, ancestor of the Wedgwood Ale House, was not only the first tavern in Wedgwood but was also the first business to change its name to Wedgwood.

After the Shauers moved away, the tavern became Hansen’s.  In 1945 Mr. Hansen rebuilt to create the present commercial building at 8507 35th Ave NE with the tavern on one end.

By 1945, Balch’s first Wedgwood group of houses was filling up with residents, and businesses were attracted to the expanding customer base.  With the Wedgwood development’s northern edge at NE 85th Street, Mr. Hansen seems to have caught onto the idea and he renamed his business the Wedgwood Tavern.  Other businesses followed suit and soon there were a number of Wedgwood-names in the neighborhood:  Wedgewood Pharmacy, Wedgwood Presbyterian Church, Wedgwood Texaco and Wedgwood School.  The 1954 naming of Wedgwood School seemed to solidify it as the name of the neighborhood.

In 1956 the Jacklin’s daughter, Priscilla Yeager, wrote an article called “The Old Days are Long Gone,” in the Wedgwood community newsletter.  Priscilla interviewed her mother about the early store at their house at 7528 35th Ave NE and about the changes in the neighborhood over the years.

Balch recounted that his wife Edith had not liked the name “View Ridge” which had been Balch’s previous development, so he told her she could choose the name for the next housing group.  Edith Balch chose the name Wedgwood as an allusion to the wooded character of the new development and as a tribute to an English craftsman, Josiah Wedgwood.

By the mid-1950s Albert Balch had built more sections of Wedgwood houses and by that time he had also acquired ownership of three corners of the intersection of NE 85th Street.  Balch was not a commercial developer so he leased out these corners to businesses.  Balch wanted to create a business district with a variety of services which would help make Wedgwood a good place to live.

Balch built medical-dental offices in the block adjacent to his office at 8050 35th Ave NE (today’s Seattle Audubon office).  He facilitated the building of banks and stores at the NE 85th Street intersection, and a restaurant called the Sir Wedgwood.

The next hundred years in the Wedgwood business district

Along with Priscilla Yeager we might now say that the old days in Wedgwood are disappearing, because of changes in the types of businesses and the tearing down of commercial buildings.

The business intersection of NE 85th Street has retained some of its 1950s character with buildings built in that era.  Since 1959 there has been a Wedgwood Shopping Center at the southeast corner of the intersection with a grocery store, the Wedgwood Broiler restaurant, and other stores and offices added over the years. 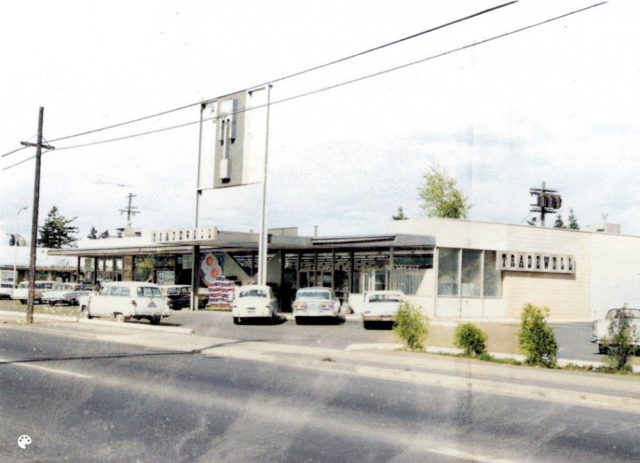 The grocery store in the Wedgwood Shopping Center was originally built in 1959 for Tradewell.  The last tenant of the grocery store building was QFC which closed in the year 2021.  Now the nearest grocery is the Safeway at the intersection of NE 75th Street.

In June 2022 it was announced that the long-time owners of the Wedgwood Shopping Center are getting ready to sell the property.  A developer has begun applying for permits and design approval so that in about two years time, they can complete purchase of the property and begin redevelopment.  The plan is to demolish all the present structures, which are the (closed) grocery store, the Wedgwood Broiler restaurant and all the other shops.  Some businesses, such as the branch of Homestreet Bank on the site, have already made plans to move to a nearby location so that they can keep operating.

This redevelopment news has been a huge shock to the neighborhood.  It is difficult to absorb what it will mean to lose the beloved Wedgwood Broiler as well as other stores.  The year 2022 is the start of the next hundred years in the Wedgwood business district with new types of buildings and businesses.

The center of the Wedgwood business district is at the intersection of NE 85th Street where there is a grocery store, the Wedgwood Broiler restaurant and other stores and banks. Photo by Valarie.

Valarie is a volunteer writer of neighborhood history in Seattle.
View all posts by Wedgwood in Seattle History →
This entry was posted in 7528 35th Ave NE, businesses and tagged Neighborhood History, Seattle. Bookmark the permalink.