The Stairways of Wedgwood

Posted on August 16, 2020 by Wedgwood in Seattle History

The City of Seattle’s geological formation looks as though a glacial hand pressed into the land like cookie dough.  There are valleys across Seattle and north-south-running ridges as though the dough oozed up between the fingers of the hand.  For this reason Seattle is a city of hills and sharp drop-offs where in some places streets could not be put through because of the steep grade.

To get through where there are no streets, Seattle has hillside stairways for pedestrians.  Seattle has more than 660 outdoor stairways which are built and maintained by the City of Seattle’s Department of Transportation.

Blaine Street Steps with Streissguth Gardens at the top. Photo by Cary Simmons.

Some of Seattle’s most well-known stairways are on its steepest hills, Capitol Hill and Queen Anne.

The Howe Street Stairs on Capitol Hill start at the intersection of 10th Ave East & East Howe Street, and contain 388 steps down to Lakeview Blvd East.  This stairway was built in 1911 and it is believed to have been done so that people could reach a streetcar line on the arterial street.

Like Capitol Hill, Queen Anne Hill was one of Seattle’s earliest residential neighborhoods.  It acquired its name in the 1880s-1890s because of its many Victorian/Queen Anne style houses.  This hill has had many beautification projects such as creation of boulevards and outlooks for the view southward to downtown Seattle and westward out over Elliott Bay.

Queen Anne’s Wilcox Wall, built 1913-1915, is actually a retaining wall with stairs built into it.  It extends between 7th and 8th Avenues West and includes the Marshall Park Viewpoint.  The Queen Anne Historical Society has a map of all of the pedestrian stairways on the hill (see source list below.)

Stairways in and around the Wedgwood neighborhood in northeast Seattle

Like many other Seattle neighborhoods, Wedgwood has ridges and valleys.  Some of the ridges are so sharp that the through-street must be connected by a stairway.

Along 30th Ave NE in Wedgwood is a prominent ridge with a sharp drop-off on its western edge.  In the valley below, bounded by 25th Ave NE, is the Wedgwood Pool, Dahl Playfield, the Picardo P-Patch, University Prep school and Temple Beth Am.

To reach these community resources, two stairways, one at NE 77th and one at NE 80th Street, extend from 30th Ave NE westward down the hillside.  These east-west stairway crossings make it possible for pedestrians to get down to the valley and go over to the arterial 25th Ave NE where there is a bus line. 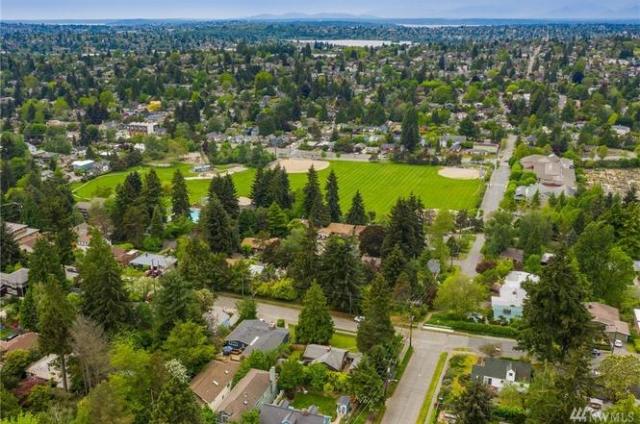 Looking westward out over 30th Ave NE to Dahl Field in the valley below. The road shown running from the bottom of the photo toward 25th Ave NE, is NE 80th Street. The street is broken at the edge of 30th by a steep drop-off and is connected to the continuation of NE 80th by a stairway.  Photo courtesy of Northwest Multiple Listing Service.

On 30th Ave NE at NE 85th Street is Wedgwood Elementary School.  The hillside stairs along 30th Ave NE function as ways to walk to and from residential streets to get to the school. 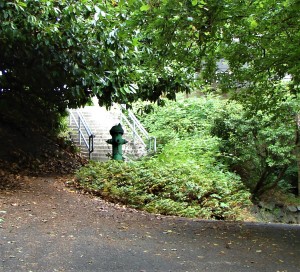 In recent years Seattle’s Safe Routes to School program has worked to put in sidewalks and through-routes, even if the routes are stairways instead of streets, leading to neighborhood schools.

NE 90th Street has a break in it due to a steep drop-off just west of 25th Ave NE.  There is a stairway connecting the segments of NE 90th Street to the arterial Ravenna Ave NE below.  The stairs at NE 90th also help those living in residential neighborhoods near Ravenna Ave NE and Lake City Way NE, to get up the hillside onto the streets leading to Wedgwood School.

We can see that the stairways of Wedgwood are all in the vicinity of community resources, connections to an arterial with its bus stops, and proximity to Wedgwood School at NE 85th Street & 30th Ave NE.

The western edge of Wedgwood

The western edge of Wedgwood is at Lake City Way NE, which runs through a valley.  On the highway’s western side is a steep hill ascending to 15th Ave NE, another ridge line.

From 20th Ave NE a path continues westward along NE 95th Street, the southern boundary of the Sacajawea School.

At the intersection of NE 95th Street from Lake City Way NE, a retaining wall contains a long flight of stairs going up to 20th Ave NE.

On the western hillside above Lake City Way NE, the NE 95th Street stairs emerge by Sacajawea Elementary School at 9501 20th Ave NE.  A path continues westward along the southern boundary of the school, leading to a park. 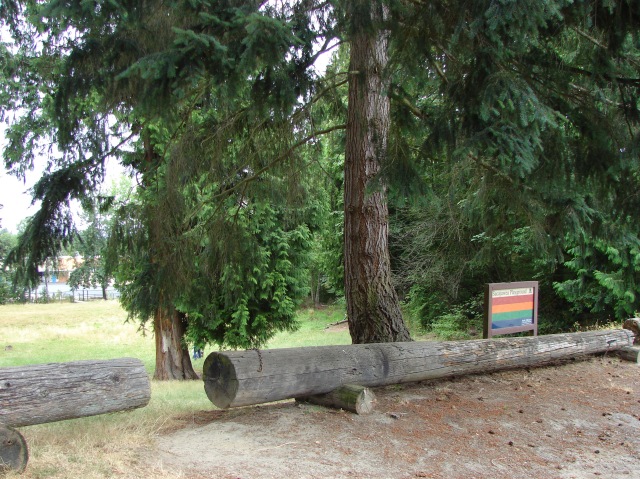 A park along the southern boundary of the Sacajawea School with parking area on NE 94th Street. 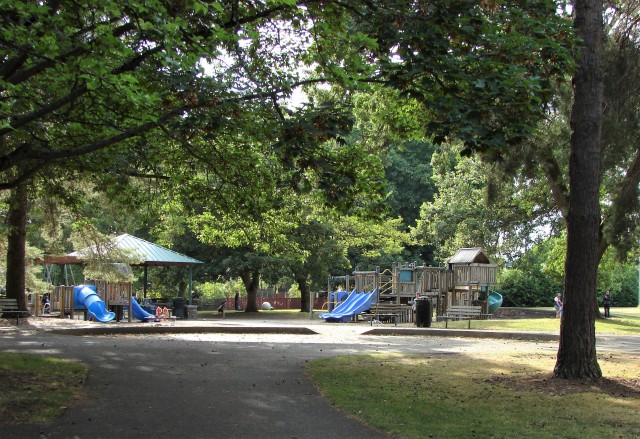 On the east side of 45th Ave NE, across from View Ridge Park, two sets of stairs ascend to View Ridge School.

Like Wedgwood, View Ridge has a topography of pronounced ridges and valley areas.

The center line of the View Ridge neighborhood is 40th Ave NE.  To the east, there is a very high ridge with 50th Ave NE at the top, descending eastward to Sand Point Way NE on Lake Washington.

The center of the neighborhood is View Ridge Park at NE 70th Street & 45th Ave NE.  On the east side of 45th Ave NE, stairs ascend to View Ridge Elementary School.

In my exploration of stairways in and around the Wedgwood neighborhood of northeast Seattle, I did not find any one good on-line source list of all the stairways.  Some books and articles about outdoor stairways have overlooked the northeast Seattle area or are not up to date.

Looking east across the Thornton Creek Water Quality Channel, we see the pathways and viewing areas around the channel cut diagonally through the block. The buildings on the perimeter are: left: Thornton Place Apartments; center: Aljoya retirement community; right: Kaiser medical building on the corner of 5th Ave NE and NE 100th Street.

SDOT Bridges, Stairs and Other Structures and the Stairway Maintenance Program.  Stairways are built and maintained by the Seattle Department of Transportation.

Seattle Walks: Discovering History and Nature in the City, by David B. Williams, 2017.  While not specifically about stairways, this is the best book available about walking tours of different Seattle neighborhoods with info on architecture, geology, history and plants.  In addition to his books and the essays on his blog page, the author is now leading virtual walking tours where you can go along to see the stories in stone in Seattle buildings.

New houses built next to the NE 77th Street stairs which help pedestrians cross 30th Ave NE.  The orange excavator machine at right, has just demolished another house, where a third new house will be built in this row.

Valarie is a volunteer writer of neighborhood history in Seattle.
View all posts by Wedgwood in Seattle History →
This entry was posted in Neighborhood features and tagged Neighborhood History, outdoor stairways, Seattle. Bookmark the permalink.

6 Responses to The Stairways of Wedgwood