Posted on July 5, 2017 by Wedgwood in Seattle History 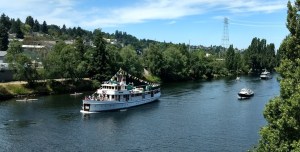 Boat parade on July 9, 2017 in the Lake Washington Ship Canal

July 4, 1917 was the official opening day of the Ballard Locks in Seattle.  On that day one hundred years ago, the SS Roosevelt led a marine parade of commercial and pleasure craft through the ship canal into Lake Union.

On Sunday, July 9, 2017, we will commemorate this historic event by re-creating Opening Day.  The historic schooner Adventuress will lead a marine parade of historic vessels from Salmon Bay, through the locks eastward into Lake Union.

Activities begin at 10 AM, leading up to the Adventuress transiting the Ballard Locks from west to east.  The Adventuress, standing in for the SS Roosevelt — the first large ocean-going vessel to transit the locks west to east — will enter the large lock at approximately 10:15 AM.  As she enters the ship canal the Adventuress will be joined by vessels of all types and sizes, including two, the GloryBe and Keewaydin (ex-Honey Boy) which were in the Opening Day boat parade in 1917!

There will be forty-seven registered boats in the parade. The parade will end at South Lake Union, where the Adventuress will be moored at Lake Union Park next to the Center for Wooden Boats.  Parade viewing spots are available all along the ship canal in the neighborhoods of Ballard, Fremont and Queen Anne and at Lake Union.

Look for more summer events and outdoor music concerts at the Ballard Locks on their 2017 events page.

Valarie is a volunteer writer of neighborhood history in Seattle.
View all posts by Wedgwood in Seattle History →
This entry was posted in Events and holidays and tagged Ballard Locks, Lake Washington Ship Canal, Making the Cut 100, Neighborhood History, Seattle. Bookmark the permalink.