Posted on August 27, 2012 by Wedgwood in Seattle History

Wedgwoodians of the 1940s may have been puzzled to learn that their voting district was called Sonora, which is a place name in Mexico.  Those living north of NE 85th Street and east of 35th Ave NE were in the Sand Point Precinct, and that made a little more sense – but not too much.  Before the era of precinct numbers, the King County Election Superintendent, Roy Erford, gave each voting area a colorful name.

Sonora, Thalia, and Ziria were just some of the names of Seattle voting precincts in the days before the present system of legislative districts (Wedgwood is in the 46th District) plus an identifying precinct number.  It seemed that the King County Election Superintendent, Roy Erford, was having way too much fun making up names which he defined as “euphonious,” meaning pleasant-sounding.

In the 1940s new King County election precincts were forming so rapidly in north Seattle due to population growth, that Erford thought it best to give the precincts distinctive names.  Some were named for geographical sites such as Sand Point, but lacking that, Erford used his creative thought power.  Sometimes Erford used Greek or Latin root words, since he had taken Greek in college and had trained as a lawyer.

Thalia precinct (part of Crown Hill) was named for one of the Nine Muses in Greek mythology, the goddesses of music, song and dance.  This actually had nothing to do with Crown Hill, but only that Erford liked the name Thalia.  Since there was already a Bothell voting precinct, when another precinct was created Erford took the word “Bothell” and rearranged it into Thellbo.  Rhoda (part of Lake City) is a name from the Bible and Sonora (Wedgwood south of 85th Street) is a place name in Mexico.

The name “Ziria” was deliberately chosen by Erford because it was short.  Ziria is a place-name in Greece, which Roy Erford applied to a voting district in a five-square-block area from NE 65th to 70th Streets, 30th to 35th Avenues NE.  The area was called the Roosevelt Heights plat and today is the site of the Northeast Branch Library.  In the 1940s, the polling place for the neighborhood (where people came to use voting machines in-person) was at the Seattle Children’s Home, 3300 NE 65th Street.

Of the precinct name he had chosen, “Ziria,” Erford explained, “To tell the truth, that’s an awfully small precinct geographically.  I had to think up a real short name so it would show up on the map.” 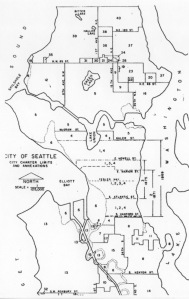 Roy Erford’s whimsy was that of a man who was not afraid of losing his job.  He was a political appointee as he had been very active in the King County Democratic Club, so as long as the Democrats were in office, he would be, too.

Despite his light-hearted approach to the naming of voting precincts, Erford was an honest and conscientious public official who was respected by all.  He had started working in the elections department in 1934 at age 50, after practicing law in Seattle from the time he graduated from the University of Washington and Johns Hopkins University.  He took over the duties of King County Election Superintendent on January 2, 1935 and served until his death at age 64 in 1947.

With the rapid growth of King County in the 1940s, Roy Erford probably foresaw that areas such as the Wedgwood neighborhood would soon come into the city limits of Seattle and the whole of King County would need to reorganize its election precincts by identifying numbers instead of names.  Every ten years, districts are revised based upon census data, so a renumbering was due to come after the 1950 census.  Perhaps Roy Erford anticipated that his euphonious election district names would soon be supplanted by a less-colorful numerical system, and in the meantime he just wanted to keep things lively.

Seattle Street Directional Designations:  map showing changes made as of 1961.

THANK YOU to reader David L. whose inquiry about “Ziria” led me to write this article and gain a better understanding of Seattle precincts and plat maps.

Valarie is a volunteer writer of neighborhood history in Seattle.
View all posts by Wedgwood in Seattle History →
This entry was posted in boundaries, name of the neighborhood and tagged election districts, Neighborhood History, precinct names, Seattle, Seattle city limits, Street directional designations. Bookmark the permalink.