The Big White House on the Hill in Wedgwood

Posted on April 3, 2012 by Wedgwood in Seattle History

In the 1930s in Wedgwood there were mostly small houses and very few big houses, due to the difficulty of heating and that smaller houses were less expensive to build.   One big house which was very visible was perched on the crest of a high hill, west-facing and overlooking the valley of the Picardo Farm.  The house at 8234 28th Ave NE is in today’s Wedgwood neighborhood, but in those days the area was outside the city limits and had no name. 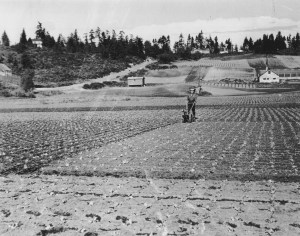 The Picardo Farm looking east toward 30th Ave NE, circa 1943.  At top left can be seen the white house at 8234 28th Ave NE, built in 1916 in the Nevins & Park plat of houses.  Photo used by permission of Picardo family; all rights reserved; do not copy.

In the 1930s Margaret Mattocks was fascinated with the big white house on the hilltop and she liked to take walks up there to see it.   There was no I-5 freeway then, so from her house at NE 80th & 2nd Ave NE Margaret was able to walk straight east on NE 80th Street until she came to 25th Ave NE where there was the Picardo Farm (now the City of Seattle P-Patch.)   A steep path at NE 82nd Street went up the hill to where the big white house at 8234 28th Ave NE was part of a one-block development.

Two men had bought five acres of land from NE 82nd to 85th Streets, 28th to 30th Avenues NE, which had been Tract 13 of the Mary J. Chandler plat.  The men replatted Tract 13 in 1918 as the Nevins & Park Addition.   John R. Nevins and Earl G. Park were draftsmen/architects who worked for a famous architect in Seattle, Charles H. Bebb.   Two of Nevins & Park’s co-workers, Bert Wait and Earl’s brother John A. Park, also took lots in the new plat.   A fifth man, Paul A. McAlister, was also a draftsman but at a different company, and he joined the plat in 1918 as well.

These first five families cooperated in the development of a well water system for the block, as Seattle City water had not yet extended out to the area when they started living there in 1918.   There was no electricity, either, so the families used gasoline-pressure lamps. 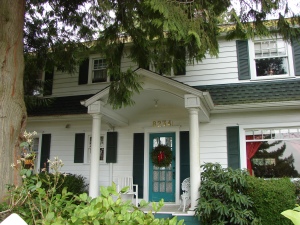 The lots on the highest point of the hill were sold to Bert & Grace Wait, who had five children.   They built and occupied the house, which straddles two lots, in about 1916.   The house style of 8234 28th Ave NE is Dutch Colonial Revival, whose distinctive characteristic is a gambrel (barn-shaped) roof.   There is a columned, classical-style porch, and symmetrically arranged windows on either side of the centered front door.   The second floor has a shed dormer running the length of the house, which adds floor space to the upstairs rooms.   The second-floor windows repeat the symmetrical pattern and have multiple panes in the upper sash.   It is possible that this is a “plan house,” obtained from the very popular pattern books of Seattle architect Victor W. Voorhees.   Voorhees’ Western Home Builder pattern book of 1910 contains Design No. 38A, of which the house at 8234 – 28th Ave NE is an example of the style. 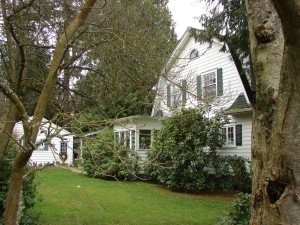 Dutch Colonial houses have a gambrel (barn-shaped) roof and often have a sunroom built out on one side of the house  At left is the carriage house which was accessed from an alley.

By 1937 the Wait family was ready to sell their house and Margaret Mattocks became very excited about buying it.   She was not able to persuade her husband William, however, as he thought that the house was too far out in the country!   Margaret was heartbroken when another man, W.R. Davidson, bought the house in December 1937.   Davidson immediately began fixing up the house for his bride Kathleen, who awaited in Vancouver, British Columbia.

A few months later Margaret visited the house again and talked to Mr. Davidson.   He was living in the house and Kathleen had come to see it but she had refused to live there.   Census and border crossing records show that Mr. Davidson made multiple trips to Vancouver, B.C., but it appears that not only did Mr. Davidson’s house-buying efforts fail, but the Davidson’s marriage failed, as well.   After owning the house for just six months, Mr. Davidson wanted to sell it.   This time Margaret was able to convince her husband William that the house was a good buy.   The sale closed on May 2, 1938.   The Mattocks family lived in the house until Margaret’s death in 1992 at age 93.

Valarie is a volunteer writer of neighborhood history in Seattle.
View all posts by Wedgwood in Seattle History →
This entry was posted in 8234 28th Ave NE, Architecture, Houses, Plat names and tagged the 1930s in Wedgwood. Bookmark the permalink.