An Elm Tree in Seattle History

Posted on July 8, 2022 by Wedgwood in Seattle History

The American Elm is a species of tree native to the northeastern United States, and elms can also thrive in the temperate climate of the Pacific Northwest.  Elms can grow to seventy feet high, with a wide-spreading canopy of branches which makes the tree beloved of the shade it provides. 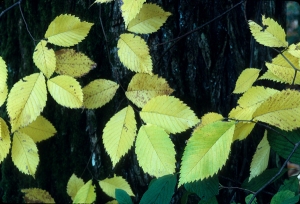 Leaves of the American Elm tree

The majesty of the American Elm’s height and broad canopy may be the reason why a row of elms were planted in Cambridge, Massachusetts, in about the year 1700 alongside the town commons, a central gathering place.

Nearly 250 years later we still have four American Elm trees in Seattle which are George Washington Elms because they are descended from one of the original trees at Cambridge Common.

Cambridge, cradle of the Revolution

George Washington at the Continental Congress

Cambridge was founded in 1631 and was one of several towns, including nearby Boston, which had been populated by members of the original Massachusetts Bay Colony.

Commemorative paintings of the July 3, 1775 arrival of George Washington at Cambridge Common depict him and the soldiers dressed in uniforms, but we know this could not be the way it really was.  The volunteers had no military training and showed up with their own clothing and weapons.  It was the task of George Washington to form an army out of these men. 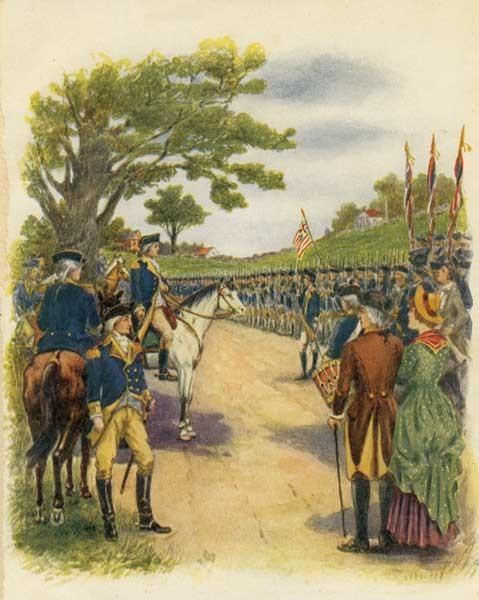 The elm tree:  symbol of patriotism

One of the trees at Cambridge Common, believed to be the one under which General Washington sought shade, became a symbol of patriotism and was designated the George Washington Elm.  This elm tree lived to be about 200 years old.  When it broke apart and fell in 1923, attempts were made to start new trees from its cuttings.  Fortunately, the work of cultivating more trees from the original elm had begun even before that elm tree died.

Washington is the only state which is named for a former U.S. president, and it is fitting that Washington State has some of the George Washington Elm tree “descendants” from the original one at Cambridge Common.

In 1896 a University of Washington alumni went out to Harvard University (adjacent to Cambridge) to do graduate study work.  He received permission to take cuttings of the George Washington Elm and try to grow a new tree.  Finally in 1902 he succeeded and sent the sapling to Professor Edmund Meany back in Seattle.

When the original Cambridge tree died in 1923, University of Washington gardeners started growing saplings from its scion (descendant) tree here in Seattle.  By the early 1930s they were able to send out more scions of the tree, not only back to Cambridge but to other state capitals and college campuses.  This was just in time for the 1932 commemoration of the birth of George Washington in 1732. 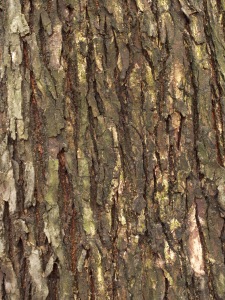 The life of the original George Washington Elm Tree has been extended several times by saplings grown and shared back and forth from Seattle to Cambridge.  The tree on the UW campus in Seattle died in 1963 when it was struck by lightning.  It was replaced by a sapling grown from cuttings of the tree at Cambridge — which had been grown from Professor Edmund Meany’s UW tree.

Today in Seattle there are four George Washington Elms, documented as authentic descendants from the original tree.  In addition to the tree on the campus of the University of Washington in Seattle, there is one at the Arboretum and one at the Evergreen Washelli Cemetery.

Denjiro Nishitani came from Japan to Seattle in 1906 in search of the American dream of greater economic opportunity.  In 1908 he became the groundskeeper of an estate at Green Lake in north Seattle, owned by businessman J.D. Trenholme.  Mr. Trenholme had had experiences parallel to that of Denjiro Nishitani’s as a family man and an immigrant.  When he first came to the USA in the 1890s Trenholme had left his wife and children behind in Canada while he struggled to get established.

While living on the Trenholme estate, Denjiro began bringing his family from Japan to Seattle.  He was able to bring his wife and all four of their children who had been born in Japan, to the USA just in time, before Alien Laws ended immigration.

The Nishitanis were able to buy the property of their plant nursery in the name of their son George, born in the USA, before this loophole in the Alien Land Bill of 1921 was closed in 1923, which was done to prevent Japanese from buying land.

The retail storefront sign of Oriental Gardens had at first faced east to what is now Ravenna Avenue NE, at what was then called the Erickson Road.  Then a new highway was put through on the west side of the shop, Victory Way (today’s Lake City Way NE).  With the increase in car travel in the 1920s, the population increase in northeast Seattle, the visibility of the plant nursery from both of these major roads, and the Nishitanis reputation for gardening work, Oriental Gardens was a successful business.

Oriental Gardens as it looked in 1916. The sign faced Ravenna Avenue on the east side of the nursery. As yet there was no Lake City Way.  Photo courtesy of the Nishitani family.

Denjiro suffered from declining health and died in 1926 at age 46.  He left behind his wife and ten children, four who had been born in Japan and the rest in Seattle.  By 1920 Denjiro’s eldest son, Hiromu (nicknamed Kelly) had started working with him full-time at Oriental Gardens.  Kelly took over the business upon his father’s death, assisted by his mother and siblings.

An elm tree in Oriental Gardens 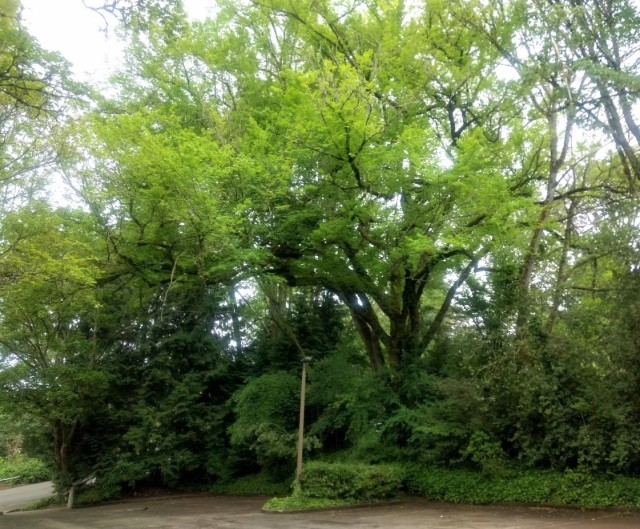 Kelly’s two sons, Jim and Sam, grew up in the beautiful setting of the gardens with Willow Creek which ran through the property.  They became third-generation stewards of Oriental Gardens as as they continued to live on-site.  Sam helped run the business and Jim worked for the Botany Department at the University of Washington for 34 years.

Office building on the site of the former Oriental Gardens.

In the early 1970s with the economic slump called the Boeing Bust, and with both Jim and Sam transitioning into other occupations, the decision was made to sell the Oriental Gardens property.  Their grandmother, Jin Nishitani had died in 1961, and Kelly died in 1969.  The last person living on-site as of 1970 was Martha, the ninth Nishitani sibling, who had become a well-known modern dance teacher.

The Nishitanis were able to find buyers, Mrs. & Mrs. Bode, willing to preserve the garden quality of the property.  The Bode family had the franchise for Weight Watchers so they built an office building for the program, located closest to Lake City Way NE.  The parking area, accessed from NE 98th Street, was terraced to preserve the beauty of the site, creating a sense of the former gardens.  Bridges span the creek to the building, and there is an outdoor patio at creekside.

The Weight Watchers owners sold the property in 1999 and then the building became an office for a computer software company.  As of this writing in 2022, the interior of the building is being remodeled to become a preschool called Willow Creek Childcare.

The tree and the family stand strong 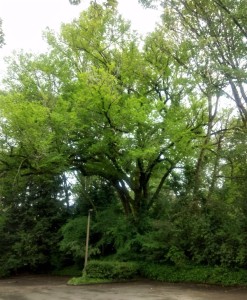 The George Washington Elm is a symbol of the American dream of freedom in a new country; therefore we can appreciate the irony of the Nishitani family’s difficult experiences as immigrants and as first-generation Americans.

Denjiro Nishitani came to the USA in search of freedom and opportunity, and he became an active and respected member of his community in northeast Seattle.  All ten of the Nishitani children went through the local elementary school and were involved in many ways in the neighborhood network.  But then, by wartime decree of the federal government, the family was assumed to be un-American because of their Japanese ethnicity, and so they were incarcerated during World War Two.

On the former Oriental Gardens site, the George Washington Elm still gives shade and beauty to this corner of Seattle.  It stands as a silent reminder of our heritage of the Revolutionary era, and the contributions to the community of present-day families like the Nishitanis.

Oriental Gardens in Meadowbrook: another article on this blog with more info about the Nishitani family. 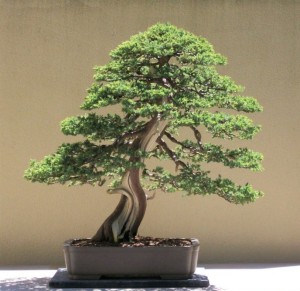 Pacific Bonsai Museum: In the 1950s and 1960s Kelly Nishitani became well known for the practice of bonsai, an art form of growing trees artificially small.  Kelly died of a heart attack in 1969 and the museum has an exhibit in his honor.

Trees of Seattle online map of street trees such as the Flame Ash which line 35th Ave NE.

University of Washington Botanic Gardens blog, May 31, 2018, “Finding the Story of our George Washington Elm.”

George Washington Elm tree at the State Capitol in Olympia.

Valarie is a volunteer writer of neighborhood history in Seattle.
View all posts by Wedgwood in Seattle History →
This entry was posted in Immigrant heritage, Meadowbrook neighborhood, trees and tagged Neighborhood History, Seattle, Trees, WPLongform. Bookmark the permalink.

4 Responses to An Elm Tree in Seattle History