Posted on June 10, 2022 by Wedgwood in Seattle History

During the American Civil War of 1861 to 1865, one of the pivotal battles was at Gettysburg, Pennsylvania, over three days: July 1, 2, and 3, 1863.  This titanic confrontation between Confederate troops commanded by Robert E. Lee, and the U.S. government troops of General George G. Meade, took place at a crossroads town at the north end of the Shenandoah Valley. 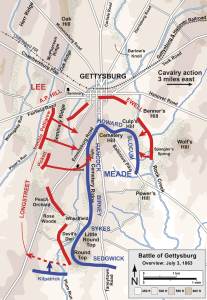 Gettysburg is only eighty miles north of Washington, D.C.  General Lee had thought to bring his Confederate troops in a circular swoop down to invade the Federal capital, but the battle at Gettysburg put a historic stop to the plan.

The events of Gettysburg may or may not have marked a turning point in the Civil War, which would continue on for two more years, but Gettysburg is remembered as a significant battle for several reasons.  A very large number of troops, about 170,000 total, engaged in the combat which was the largest battle ever fought on North American soil.  After three days of bloody struggle, survivors were forever marked by their participation.

The events of the Civil War occurred far, far away from what was then the tiny village of Seattle in Washington Territory, but in decades to follow, Civil War veterans moved westward and some became influential citizens of Seattle.  This blog article will tell of H.C. Henry, a man who fought at Gettysburg and later became a significant contributor to his adopted city of Seattle.

H.C. Henry:  from Vermont to Seattle

Horace Chapin Henry of Vermont was only eighteen years old when he fought in the Civil War.  He was at the center of the Union line which repulsed the action known as Pickett’s Charge on the third day at Gettysburg, July 3, 1863.

Home of the Henry family on Harvard Avenue between Seneca & Spring Streets. The house was later demolished.

After the war, H.C. Henry came down with tuberculosis and was sent to recuperate while living with relatives in Minnesota.  H.C. Henry recovered his health, married and started a career as a railroad contractor.

In 1890 H.C. Henry and his family came to Seattle to live while he was in the process of building the Northern Pacific Railroad.  They built a large home at 1117 Harvard Ave E, and when that house burned down they built another on the same site.

The wealthy and influential Henry family still have sites in Seattle which were named for them.  The most prominent is the Henry Art Gallery on the campus of the University of Washington.  After Mrs. Henry died in 1921, H.C. Henry donated their entire art collection and gave money to built the art gallery which was the first in Washington State.

Henry Memorial Chapel at The Highlands.

H.C. and Susan Henry had four children and there are buildings in Shoreline, just north of Seattle, which were named for the Henrys’ two youngest children, who predeceased their parents.

Youngest child and only daughter Florence died of a burst appendix in 1904.  In her memory, in 1910 her parents built the chapel which is in the residential Highlands, adjacent to the Seattle Golf  Club on 145thStreet just west of Greenwood Avenue. The Henry family did not live at the Highlands but Mr. Henry was a member of the Seattle Golf Club and was involved in decisions of the disposition of the land, divided into the golf course and the adjacent residential subdivision. 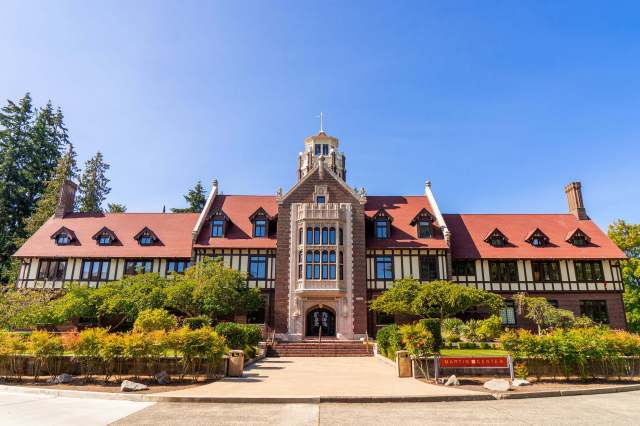 Central administration building at what was once the King County Tuberculosis Sanatorium, 19303 Fremont Ave North.

After the deaths of Susan Henry (1921) and H.C. Henry (1928) their two surviving sons donated the Henry home on Harvard Avenue to the Seattle Public Library.  It may be that the intention was that the house itself be used as a library.  Instead, the house was sold and the funds used to build what became the Henry Branch Library at another location on Capitol Hill, the corner of Harvard Avenue & East Republican Street.  Today it is simply called the Capitol Hill Branch.

Gettysburg and the legacy of Civil War veterans in Seattle

The lives of those who survived the battle of Gettysburg were often marked by a sense of purpose, with the feeling that there must be some reason why they survived so that they would try to help build a more peaceable world.  The life of Horace Chapin Henry is just one such example of an “ordinary” soldier who became a great influence upon his adopted city of Seattle.

Each year as the Civil War Battle of Gettysburg is commemorated over July 1st to 3rd, we can find many such examples of veterans and their Seattle stories.  It’s really amazing to see that so many veterans of Gettysburg eventually made their way to Seattle and spent the rest of their lives here.  Even more amazing is to know that some were on opposite sides in the same battle, such as H.C. Henry and a Confederate soldier, John G. Scurry, who also spent the rest of his life in Seattle.

The legacy of Civil War veterans is all around us, including the life of H.C. Henry who worked for the betterment of Seattle and for whom there is a chapel, library, art museum and former TB treatment center which he contributed to Seattle. 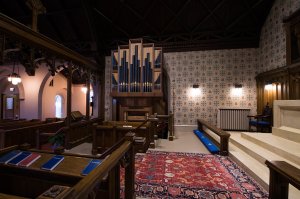 Interior of the Florence Henry Memorial Chapel at the Highlands.

In a 1906 cartoon for Argus magazine in Seattle, H.C. Henry is shown gripping railroad ties to build his empire.

Valarie is a volunteer writer of neighborhood history in Seattle.
View all posts by Wedgwood in Seattle History →
This entry was posted in Civil War and tagged Civil War, Gettysburg, historic buildings, Seattle. Bookmark the permalink.