Posted on November 12, 2020 by Wedgwood in Seattle History

In May 2020 a street clock called Benton’s Jewelers was removed from its location, packed and sent for restoration.

The clock at 3216 NE 45th Street was located east of the University Village shopping center and east of the five-way Union Bay Place NE intersection.  The clock had originally been on the sidewalk in front of Benton’s Jewelers on University Way NE, and moved with the company to the Union Bay Place location in 1986.  This was the only remaining street clock originally associated with a jewelry store in northeast Seattle.

In May 2020 the Benton’s Jewelers street clock was removed by a professional clock restoration service who will give the clock a needed rehabilitation and will bring the clock back into to working order again.

Benton’s Jewelers street clock. The buildings in the background are gone now.

The Benton’s Jewelers clock was removed for safety reasons because the clock is now in a construction zone.  The new owners of the clock received approval from the Seattle Landmarks Board to store the clock and bring it back to its location when construction of a new building on the site is completed.

The journey of the Benton’s Jewelers street clock represents the changes in the Seattle business environment over the past one hundred years.  In the 1920s street clocks were a signal of jewelry stores which also did watch repair, most prominently in downtown Seattle.

Business pressures as well as changes in the built environment caused Seattle street clocks to move from one location to another along with the owners, then fall into disuse when businesses closed.  Benton’s Jewelers closed in 2008, just short of the hundredth anniversary of the company.  The Benton family retained ownership of the clock until purchase of it by the company which is redeveloping the entire block just east of Union Bay Place NE. 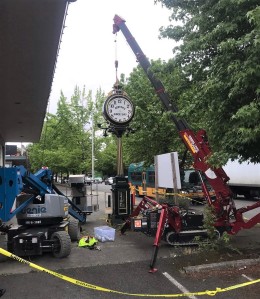 In May 2020 the Benton’s Jewelers street clock was removed for restoration. Photo courtesy of the Laurelhurst Blog.

The Benton’s Jewelers street clock is in a block of now-demolished small buildings, including a beloved Baskin-Robbins ice cream store at the point of the triangular-shaped block at the intersection of Union Bay Place NE.  The new owner of the block will build a type of business new to the neighborhood, a large senior-care residence.

Since Seattle street clocks are protected under a historic landmarking ordinance, the owner applied to the Seattle Landmarks Board for approval to remove, restore, and re-set the Benton’s Jewelers clock in place when the new building is finished in the year 2022.

Part of the landmarking ordinance for Seattle’s street clocks is the requirement that they be placed in public view.  At the new senior residence at Union Bay Place NE, there are plans to set the street clock in the outdoor courtyard entryway of the building.Joseph Mayer, the ClockFather of Seattle

Joseph Mayer immigrated from Germany to Seattle in 1883 and although he was only fifteen years old, he obtained work as a watchmaker.  A few years later, Joseph was joined by his brothers Albert & Markus.  In 1897 they formed Mayer & Brothers, a manufacturing jewelry company.

The Klondike Gold Rush began in July 1897 with a steamship of miners who arrived in Seattle with “a ton of gold.”  The news set off a flood of people coming through Seattle on their way to the gold fields.  Seattle businessmen launched a national publicity campaign for gold-seekers to come to Seattle as the place to buy supplies before going north, and as the place to return with riches to deposit.  The gold rush was a kick-start to the Seattle economy and it created a market for fine jewelry and other symbols of prosperity.

The Mayer brothers rode the wild wave of the gold rush Seattle economy to become employers of 150 people and become the premier name associated with Seattle’s street clocks. 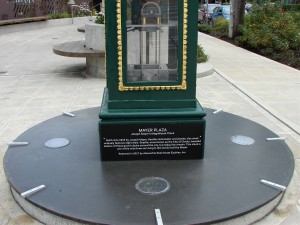 The Mayer & Brothers company was categorized as a manufacturing jeweler which, in addition to street clocks, also created jewelry, sterling silver tableware, household clocks and a variety of pins, medals, and souvenir spoons.  Mayers got the contract to make street car tokens for the City of Seattle.

Starting in about 1906, Mayer & Brothers became representatives for a Boston manufacturer of street clocks, the E. Howard Company, and in addition to handling sales, Joseph Mayer did some enhancements of the Howard clocks.

It was because of Joseph Mayer’s street clocks that Seattle began to be called the City of Clocks.  There was a boom in jewelry shops and banks in Seattle after the gold rush and they began marking their locations with street clocks.  A news article of 1930 said that from Fourth & Pike streets in downtown Seattle, a person standing at the corner could see sixteen street clocks within a block in every direction.  All of these had been created by Joseph Mayer.  Mayer & Brothers created hundreds of street clocks which were shipped to other cities, as well.

Within the pedestal base is the movement gears which keep the clock running.  Some, like the Benton’s Jewelers clock, have a glass case in the pedestal so the the motion of the clock movement is visible.  In later years in some clocks, the original weight-driven drive trains were converted to electricity so that no one needed to wind the clock.

By 1953 there were so many Seattle street clocks which were not in good repair, that Seattle’s Board of Public Works entertained a ruling to banish street clocks.  After a public outcry the City instead passed an ordinance requiring clocks to be kept clean and in good running condition, including showing the correct time.  This ordinance caused some businesses to remove their street clocks.

The Ben Bridge Jewelers clock at 409 Pike Street is currently boxed up to protect it from surrounding construction. Photo by Valarie.

In January 1981 the Seattle Landmarks Board approved preservation of a group of Seattle street clocks.  Some of these clocks are still in their original locations but many, like Benton’s Jewelers, have been moved once or more than once.

The 1981 preservation ordinance was a thematic-group nomination of Seattle street clocks as historic landmarks.  The clocks were described along with the history of Joseph Mayer and Seattle’s gold rush prosperity which created a Diamond District in downtown.   As prominent features of the streetscape, the clocks convey their significance as part of Seattle’s history and personality. The legacy of Joseph Mayer still graces Seattle streets. 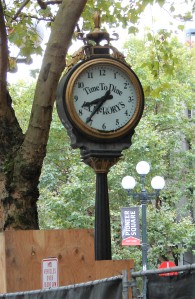 The clock at Occidental & King Streets is inside of construction fencing. Photo by Valarie.

At this writing the Ben Bridge Jewelers clock at 409 Pike Street is the only Seattle street clock still in possession by its original owners.  This clock is currently protected by being boxed up to protect it from construction at the site.  So, too, is the clock at the former F.X. McRory’s at King Street & Occidental Ave, one block west of the train station.

The Benton’s Jewelers clock is the only street clock in northeast Seattle.  The Benton’s Jewelers clock will be rehabbed and stored during construction of a new seniors-residential building to be completed by the year 2022.  In accordance with Seattle landmark requirements, the clock must be returned to its site at 3216 NE 45th Street when it is safe to do so, after the new building is built on that site.

There are two clocks in the Greenwood business district which are maintained by the local Masons group.   One clock called Greenwood Jewelers is at 129 North 85th Street, a few steps west of Greenwood Avenue.  The other is at 7910 Greenwood Ave N, in front of the Masons Lodge building and next to a bus stop (convenient for bus travelers to check the time!)

In the heart of downtown Seattle there are still two street clocks:  Century Square at 1529 Fourth Avenue (southwest corner of Fourth & Pine, across the street from Westlake Park), and 409 Pike Street (southeast corner of Fourth & Pike) in front of Ben Bridge Jewelers.  The Ben Bridge clock is currently boxed up to protect it from the remodelling work at the building.

The Hong Kong & Shanghai Bank clock is at 720 Second Avenue, in front of the present United Way building just south of Columbia Street.

In Pioneer Square on First Avenue at the southeast corner of South Main Street is the Earl Layman clock which has been restored.

At 419 Occidental Avenue (at King Street) is the F.X. McRory’s clock, currently enclosed in construction fencing.

In the Columbia City district in south Seattle is a clock at 4873 Rainier Avenue South.  It was moved from 1206 First Avenue in downtown.

Rob Ketcherside’s Clock Walk describes pedestal-type street clocks and others such as tower clocks like those at the King Street Train Station and Colman Dock.  While the ferry terminal is being rebuilt, the Colman Dock clock is currently in storage.

The Clock Walk highlights Seattle’s many clocks which adorn places like store signs and the current transit tunnel.  The clocks of Seattle hark back to the city’s history of economic boom and lively street life.

Clock in the transit tunnel at Westlake Station designed by architect Brent Carlson using terra cotta tiles.  Movement for the clock was by Electric Time Company. Photo courtesy of Thoughts in Buttermilk blog.

The historic landmark nomination report on Seattle street clocks can be read on the Seattle Department of Neighborhoods/landmarks site, or on Rob Ketcherside’s Seattle Clock Watch page.  zombiezodiac.com/rob/ped/clock/landmark.htm 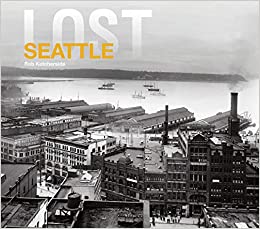 Lost Seattle by Rob Ketcherside, 2013.  Pages 44-45, “Production of Street Clocks.”  This book describes places which were part of Seattle’s cultural or economic heritage, and people who were important to Seattle’s history.

“Time Travel to Pike’s Forest of Street Clocks,” by Seattle historian Rob Ketcherside.  He has documented the Seattle street clocks and has been a major influence on their preservation.

THANK YOU to everyone who helped me with this article, most especially Seattle historians Rob Ketcherside and Joe Mabel.  Thank you to two bloggers, Feeding Squirrels and Thoughts in Buttermilk, who contributed photos.  If you would like to experience warm greetings and courteous answers to questions, step inside the Ben Bridge Jewelers store at 409 Pike Street, as I did in the process of researching this article.  Their friendly smiles were worth a lot to me that day.

When you start looking for them, clocks are everywhere in the built environment, especially in downtown Seattle. Photo courtesy of Thoughts in Buttermilk blog.

5 Responses to Street Clocks in Seattle