Posted on September 4, 2019 by Wedgwood in Seattle History

A ribbon-cutting and open-house event was held at Seattle’s Lincoln High School on September 3, 2019, as the school celebrated its modernization and renovation.  There will be more opportunities for alumni to tour the building — see the Lincoln Lynx Alumni Association page for more info. 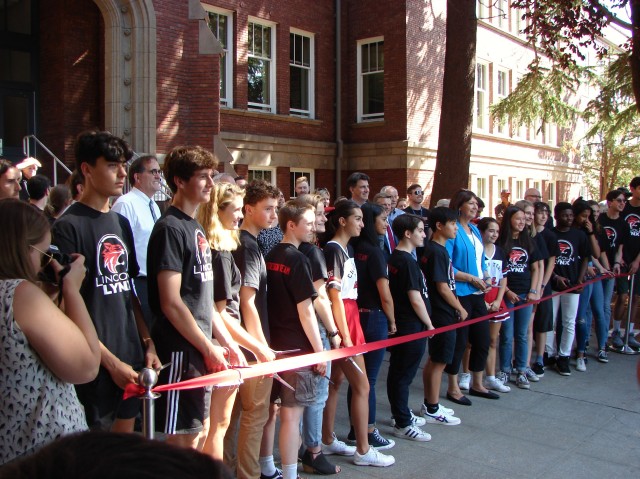 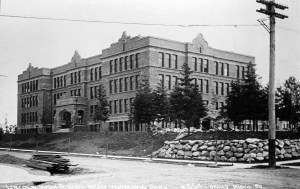 Lincoln High School is at 4400 Interlake Ave North in the Wallingford neighborhood of Seattle. It opened in 1907.

Lincoln at 4400 Interlake Avenue North in the Wallingford neighborhood opened in 1907 as Seattle’s second high school.  Lincoln was immediately overcrowded and several additions were built over the years, along with the use of portable buildings.

Seattle has always had economic booms and busts with resulting sharp increases and decreases of population.  After the economic recession called the Boeing Bust in the 1970s, the Seattle School District decided to close Lincoln High School because of declining enrollment and the difficulty of maintaining the building.  The last class graduated from Lincoln in 1981. 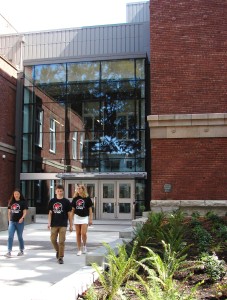 A new ground-level, glass main entry has been constructed for Lincoln High School at the bridge connecting the north and central wings. Photo by Valarie.

For the next fifteen years the Lincoln school building was leased for use by a church.   Beginning in 1997, Lincoln became an interim site for schools whose buildings were being renovated, including other Seattle high schools like Garfield.  Finally, in the present era when school enrollment is increasing, Lincoln High School’s turn came to be renovated and put back into use.

It was a day of rejoicing on September 3, 2019, as Lincoln students welcomed alumni in a ribbon-cutting ceremony followed by tours of the modernized and restored school building.

While I have tried to show the beautifully restored buildings, these photos don’t adequately convey the emotional atmosphere of hope and excitement of the new students of Lincoln High School, and the joy of the alumni who gathered to see the school reopen after thirty-eight long years of closure.  The fellowship between young and old at the open house was wonderful to see.  Students were thrilled to host the event, guide visitors in the building, and engage alumni in telling their memories. 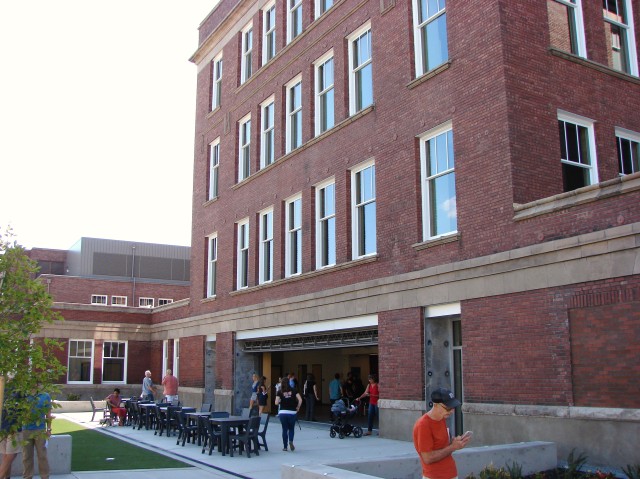 A new commons area for eating and socializing has doors which open out onto a central courtyard, east-facing, between buildings at Lincoln High School. Photo by Valarie. 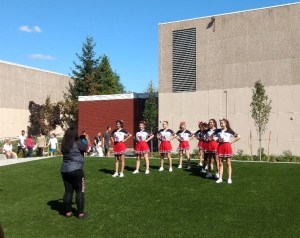 Looking eastward across the courtyard towards the auditorium building; the gym is on the left. Photo by Valarie.

The Lincoln Lynx Alumni Association has held together all during the thirty-eight years since the school closed.  Now that the wonderful day of re-opening has come, the alumni are fully engaged in planning events such as reunions and activities for supporting the present students.

Please help spread the word — if you or someone you know attended Lincoln, participation in the alumni activities would be a good investment of your time.  The activities to support the students of today and make them feel supported by their elders, can make a real difference in young lives.

Some people have fond memories of their high school years; others – not so much.  Whether your high school experience was good or bad, as adults our responsibility is to do all we can to create the best opportunities for the next generation.  We can do this by participating in alumni efforts to help the schools and mentor young people.  We can vote for the school levy and remind others to vote, too. 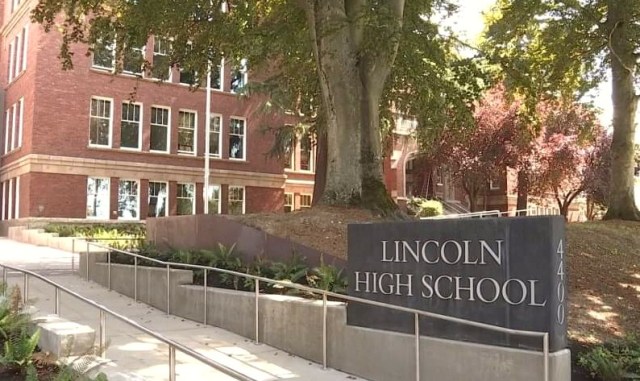 The new walkway leading up to the level-entry main door of Lincoln High School. In the background is the original main entrance in the central wing. Photo by Valarie.

Valarie is a volunteer writer of neighborhood history in Seattle.
View all posts by Wedgwood in Seattle History →
This entry was posted in School histories and tagged Neighborhood History, Seattle. Bookmark the permalink.