Completing the Trail at the Yesler Swamp

Posted on February 17, 2016 by Wedgwood in Seattle History

The name of Henry Yesler is associated with Seattle’s earliest years.  Yesler set up a sawmill in 1853 at the site of today’s Pioneer Square and the mill became the economic engine which gave the small community a reason to hope for greater things.  In the 1880s Yesler opened a second site on Union Bay in northeast Seattle.  In those days the water of the bay came up higher than it does now.  When the ship canal was completed in 1916 and the level of Lake Washington was lowered, along the shoreline a wetland area was left, which today is called the Yesler Swamp. 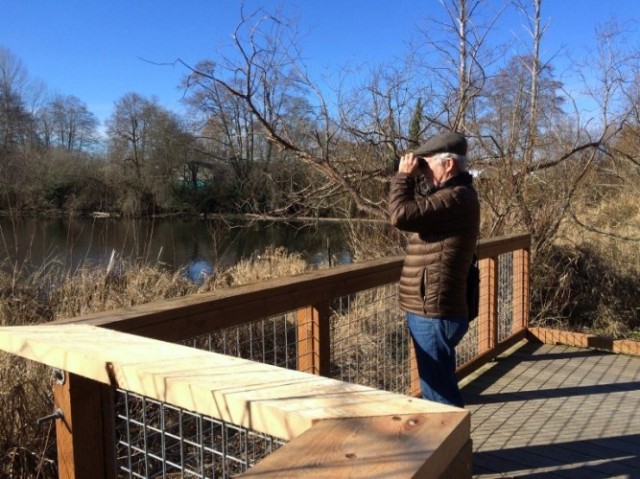 The Yesler Swamp Trail begins at the east corner of the parking lot of the Center for Urban Horticulture, at 3501 NE 41st Street.  From the University Village shopping mall area on NE 45th Street, turn south on Surber Drive.  The CUH is located just past the curve in the road, and the Yesler Swamp trailhead is at the corner of the parking lot farthest from the CUH building.

Access to the Yesler Swamp Trail is from the east corner of the CUH parking lot.

Over the past ten years a dedicated citizen group, the Friends of Yesler Swamp, have coordinated volunteers and grant-funded projects to create this nature area.  In December 2015 crews completed an ADA accessible entry from the parking lot of the CUH to the Yesler Swamp Trail.  In February 2016 the Washington Conservation Corps will work to complete the loop trail along the waterline.  The Friends of Yesler Swamp group also still needs to match $11,000 in donations for the final City grant.

UW professor and restoration ecologist Dr. Kern Ewing notes that over 200 species of birds have been seen here and in the adjacent Union Bay Natural Area, as well as raccoon, turtle, beaver, coyote and heron.  Students of Dr. Ewing’s have a ready-made nature laboratory at the Yesler Swamp where they can not only study plants and animals but can join in with the enthusiastic Friends of Yesler Swamp volunteers to nurture this wonderful urban nature resource.

UPDATE:  The Washington Conservation Corps completed the work in summer 2016 and we now enjoy the trail with all of its boardwalks.

Friends of Yesler Swamp volunteers have added enhancements such as benches at the observation platforms.  Professor Bill Bender who is chair of Construction Management at the University of Washington College of Built Environments and is a Yesler Swamp volunteer, helped build the resting areas.  The benches are salvaged wood from a large cedar tree which was cut down in the UW Arboretum in 2015.

Valarie is a volunteer writer of neighborhood history in Seattle.
View all posts by Wedgwood in Seattle History →
This entry was posted in Nature and wildlife, Neighborhood features and tagged birds, Neighborhood History, Seattle, urban nature trail. Bookmark the permalink.