The Future of 35th Ave NE in Wedgwood

Posted on July 17, 2015 by Wedgwood in Seattle History 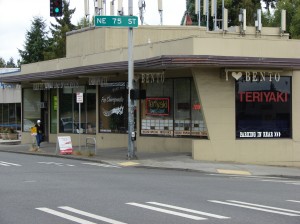 Some of the commercial buildings in Wedgwood are very old and could be ripe for redevelopment.

What is the future of 35th Ave NE?  This arterial corridor through the Wedgewood neighborhood of Seattle has businesses clustered mainly at the intersections of NE 75th and 85th Streets.  As buildings at these intersections age and are replaced, we want to have a say in how new buildings look and what the commercial offerings will be.  In a grass-roots process, the future of 35th Ave NE has been considered.  The proposed zoning changes developed in this community process would require that in the future, new commercial buildings on 35th Ave NE must have a pedestrian-friendly street environment with storefronts at sidewalk level.

The Jasper Apartments at 8606 35th Ave NE in Wedgwood were a disappointment to the community because of the building’s lack of storefronts.

For the past several years a coalition of Wedgwood activists have worked on a plan called The Future of 35th Ave NE.  This Future Project addresses the disappointments of buildings which did not add to the commercial vibrancy along 35th Ave NE, such as the Jasper which does not have storefronts.  The Future of 35th Ave NE incorporates our hopes for better-designed buildings with more of what we want, including clusters of pedestrian-accessible shops and restaurants.

The Future of 35th Ave NE process reached a critical turning point in this summer of 2015 after the committee requested that the City of Seattle’s Department of Planning and Development (DPD) take a look at the issues.  In a well-attended meeting on June 24th, a DPD representative presented the zoning changes which would require that new buildings at the commercial “nodes” of 75th and 85th meet the proposed requirements.

Potential zoning solutions could improve the pedestrian and retail experience along 35th Ave NE, especially at the intersections of NE 75th and 85th Streets.  Zoning for a pedestrian-friendly retail environment, as sent out in the Future of 35th Project, is intended to make Wedgwood’s future more walkable and shoppable along the business corridor of 35th Ave NE.  But due to the slowness of City Council in addressing the issue, more commercial buildings are being lost in Wedgwood and without a zoning requirement for storefronts, the new buildings tend to be townhouses.

One such site is 8038 35th Ave NE in a cluster of offices built by Wedgwood’s original developer, Albert Balch.  The building has been demolished and will be replaced by several tall townhouses built all of the way out to the sidewalk.   This is exactly the scenario which the Future of 35th project was meant to prevent, but due to the lack of response from City Council, the zoning regulations promoted by the Future of 35th Project, still have not been implemented as of the end of 2016.

At left is Balch’s original office at 8044 35th Ave NE.  Next to it, 8038 has been replaced with out-of-scale townhouse buildings.

Valarie is a volunteer writer of neighborhood history in Seattle.
View all posts by Wedgwood in Seattle History →
This entry was posted in Architecture, Neighborhood features, streets and tagged commercial development, Department of Planning and Development, pedestrian zones, Seattle, traffic, urban development. Bookmark the permalink.

2 Responses to The Future of 35th Ave NE in Wedgwood