The Landscape in Our Pacific Northwest History

Posted on June 10, 2015 by Wedgwood in Seattle History

The history of the exploration of our Pacific Northwest region is built upon its landscape, including rivers, mountains, natural resources and the use patterns of traditional cultures.  Two recently-released books tell stories of local history, fur traders, explorers, geology and the sites which have been preserved. 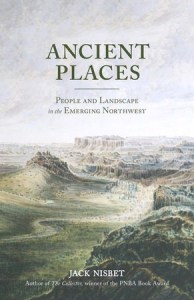 Jack Nisbet‘s new book Ancient Places, tells of the interaction of early explorers such as fur traders, with the land and peoples they encountered.  The author lives in Spokane and previously published Sources of the River about the explorations of David Thompson, an explorer and mapmaker with the Hudson’s Bay Fur Company who was the first person to chart the entire length of the Columbia River.

In the first chapter of Ancient Places, Jack Nisbet tells of receiving a photograph sent via e-mail from outer space in 2005.  American astronaut John Phillips, on a flight to the International Space Station, took a photo of himself with the copy of Sources of the River which he was reading.  While orbiting the earth in his space capsule, Phillips began taking photos of the rivers and lakes which David Thompson had mapped in 1792, laying the two views alongside one another.  Commenting upon the two perspectives, Nisbet writes that our view of earth “all depends on where you stand” in time, space and in our cultural values of what is important.

Dave Tucker is a geologist who founded the Mount Baker Volcano Research Center in Bellingham, WA.  Mr. Tucker has incorporated his love of leading field trips into his new book, Geology Underfoot in Western Washington. The book describes 22 starting points ranging from easy roadside access, to hikes of a few miles to see geological wonders.  The longest featured hike is at Johnston Ridge, Mt. St. Helens, 7.6 miles round-trip.  The easiest-to-view geological feature is the sunken trees at Willapa Bay on the southwest coast of Washington State.  At low tide, tree stumps are visible from the road, evidence of an earthquake in approximately the year 1700 which caused a tsunami and created a new coastline.

Valarie is a volunteer writer of neighborhood history in Seattle.
View all posts by Wedgwood in Seattle History →
This entry was posted in Nature and wildlife and tagged explorers, geology, hiking, Seattle. Bookmark the permalink.

3 Responses to The Landscape in Our Pacific Northwest History