A Tree in Montlake

Posted on July 27, 2014 by Wedgwood in Seattle History

Reblogged from Montlake.net/flyer/:  Seattle’s renowned tree expert Arthur Lee Jacobson has written about a fallen cherry tree near the Montlake Community Center at 1618 E. Calhoun Street, on the south side of the Lake Washington Ship Canal. Mr. Jacobson alerts everyone who would like to try growing this rare variety, to take cuttings from the fallen Horinji tree. 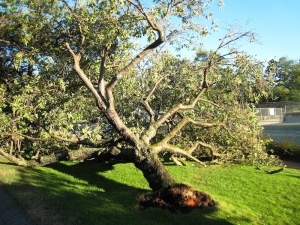 The rare Horinji Japanese Flowering Cherry Tree fell on July 26, 2014. Rot can be seen at the base of the tree. Photo courtesy of Arthur Lee Jacobson on Montlake.net

On Saturday, July 26th, 2014, Seattle lost one of its rare Japanese Flowering Cherry trees.  A thirty foot tall Horinji tree, likely dating from the 1940s, fell over into an adjacent Yoshino cherry tree near the Montlake Community Center tennis courts. To the east still stand two other Kwanzan cherry trees, and more of Yoshino. Both these latter kinds are very common in contrast to Horinji.

Tree root rots are exacerbated by such factors as mulch applied too heavily at tree bases, and overwatering. Dry-site trees in general live longer than trees in wet places. 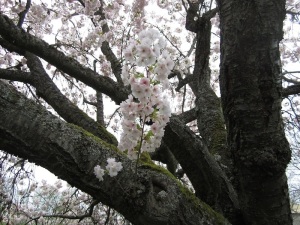 In April 2014 the Horinji Janpanese Flowering Cherry Tree at Montlake was covered in blossoms. Photo courtesy of Arthur Lee Jacobson on Montlake.net

The Horinji tree is not grafted, being unlike most cherry trees sold these days. Own-root Japanese Flowering Cherry trees live longer than those that are grafted on European rootstocks. It seems that somehow a delayed graft incompatibility sets in, becoming—in effect—the nursery industry’s version of planned obsolescence.

Since the fallen Horinji tree is not dead, people can attempt to take twig cuttings from it, before the Parks Dept. workers feed it into a chipper. Since few cuttings will root, many should be tried. Horinji is no longer available at nurseries, so if people desire one they must do their own propagation.

‘Horinji’ is the name of an ancient Buddhist temple in Kyoto, Japan.

Valarie is a volunteer writer of neighborhood history in Seattle.
View all posts by Wedgwood in Seattle History →
This entry was posted in Nature and wildlife, trees and tagged Montlake neighborhood, Seattle. Bookmark the permalink.