A Princess in Wedgwood

Posted on February 27, 2014 by Wedgwood in Seattle History

In the 1950s and 1960s the Wedgwood Community Club (WCC) was busy dealing with issues of city limits, zoning, street improvements, establishment of a business district and needed services such as schools and postal delivery.  The Club was proud of the developing community, and the WCC president of 1955-56, J.J. Jackson, thought of another way to publicize Wedgwood.  He noted that “princess” candidates from Seattle neighborhoods competed each year to be chosen Queen of the Seas at the summer festival called Seafair.  Jackson proposed, “let’s have a ‘Miss Wedgwood” contest!”

The idea took off quickly.  A WCC committee was formed to take applications and set up a selection process, and the contest was advertised in the Wedgwood Echo newsletter of May 1956. “Wedgwood has become such an important community that we feel it should be represented by a queen in the Seafair activities,” said Harold Kester, incoming WCC president of 1956.

On June 16, 1956, the annual President’s Ball was held at Sand Point Country Club to honor outgoing and incoming WCC officers, and the featured event of the evening was the crowning of the Miss Wedgwood finalist.  Judging was by Mrs. Murray Lichtman, Wedgwood School PTA representative; Josef Scaylea, chief photographer for The Seattle Times; and J.J. Jackson, outgoing president of the WCC.  The first Miss Wedgwood would receive a trophy from Albert Balch, the builder of Wedgwood, and a check for $100 to defray expenses of her wardrobe for Seafair activities.

The committee selected Janet Lorraine Michelson, who at the young age of 20 was a career girl, head of the tax department of the Lawyers Title Insurance Group.  The new Miss Wedgwood took time off from work to enter into a whirl of Seafair activities that summer of 1956.

Although Janet did not win the title Queen of the Seas in the summer 1956 Seafair competition, in her official capacity as the very first Princess of Wedgwood she exceeded all expectations in the outstanding public relations job she did.  Janet appeared on three local television interview programs and a radio show.  She represented Wedgwood in summer Seafair parades and posed for pictures on an outboard cruiser that the Lions Club was using as a fundraiser.

Janet was very poised and unflappable, such as when being kidnapped by Seafair pirates.  A pirate scooped up Janet in his arms and was about to carry her off, when he tripped and fell. Princess and pirate tumbled to the ground in a tangle, but fortunately neither was injured.

The success of the first Miss Wedgwood contest ensured its continuation, and year by year more girls applied for the privilege of representing the neighborhood.  The prestige and the potential advancement into Seafair and other publicity venues created larger number of applicants and greater competition.  “It was difficult to choose just one!” said Mylo Lindgren, WCC president of 1960.

Mr. & Mrs. Lindgren and Mr. & Mrs. Al Thorson formed the selection committee in 1960 and visited the home of each girl to interview them.  It was a subjective process of trying to decide who had the most sparkle and the best smile, and would represent Wedgwood well, Mr. Lindgren said.  The Lindgrens and Thorsons were able to agree upon their choice of a winning candidate for 1960, but they were aware of more than one mother who was perturbed that her daughter had not been selected!

Throughout the 1950s and 1960s the Wedgwood Echo newspaper was a monthly publication, containing event notices, meeting topics and land use issues. Featured here is the front-page announcement of the winner of the Miss Wedgwood contest of 1960, Joleen Robertson.

But the girls themselves were having fun and most of them did not take the contest too seriously.  The winner in 1960, Joleen Robertson, had not even submitted her own application – her parents had done so on her behalf.

Earlier on the day of the crowning ceremony at Sand Point Country Club, Joleen had gone to the beach and gotten sunburned.  She dressed up for the evening program as nicely as she could in a yellow gown which she had also worn to her high school senior prom.  Not expecting to be chosen, Joleen was munching on a mouthful of popcorn when the announcement was made that she was the new Miss Wedgwood. Joleen was happy to represent the neighborhood and she did enjoy the Seafair activities, especially riding in the Grand Parade.

None of the Miss Wedgwoods were ever crowned Seafair Queen, but Candy Soules, Miss Wedgwood 1967, placed as a runner-up with the title Lady in Waiting.  She moved into the Olympic Hotel with the Seafair Queen and another Lady in Waiting.  They participated in a jam-packed week-long schedule of Seafair activities, including a dinner-dance at the Olympic Hotel, visits to Children’s and Veteran’s Hospitals, community festivals and the big Torchlight Parade.  Candy enjoyed being a princess for a week, but was glad she didn’t win and become Miss Seafair.  The round of activities was exhausting, and for Miss Seafair there would be a full year of commitments to attend events.

Reflecting on the experience, Candy was glad she had participated in Seafair as Wedgwood Princess, because she had especially enjoyed meeting the other princesses from neighborhoods all around Seattle, people she otherwise might never have met.  She noted that some of the girls had been serious contestants, hoping to use the Seafair publicity as a stepping-stone to the Miss Washington competition or other beauty pageants. 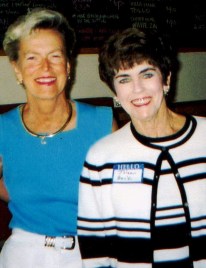 Barbara and Joleen at a Wedgwood Princess reunion in the year 2003.

The Miss Wedgwoods, after a fairy-tale summer with the title of princess, went back to being just “girls from the neighborhood.” They went on to pursue careers, or married and became housewives and mothers.  Margo Kruzner ’57 and Candy Soules ’67 both became airline stewardesses and went to live in California.  Barbara Ann Burton ’59 taught swimming at Wedgwood Pool and was often asked, “are you REALLY a princess?”

Barbara Ann Burton, Miss Wedgwood ’59, and Joleen Robertson ’60 were life-long Seattleites and attended a reunion of WCC officers and Wedgwood Princesses in the year 2003.  The glow of their princess days never left them.  Their “Miss Wedgwood” experience gave these ladies an appreciation for the community spirit of Wedgwood and a life-long commitment to public service.

This article is based upon interviews with former Community Club officers J.J. Jackson and Mylo Lindgren, and with former “Miss Wedgwoods” Barbara, Candy, Joleen and Margo.  Text and photos of this article are protected under a Creative Commons Copyright; do not copy without permission.

Valarie is a volunteer writer of neighborhood history in Seattle.
View all posts by Wedgwood in Seattle History →
This entry was posted in community club (old) and tagged Miss Wedgwood, Seafair, Seattle. Bookmark the permalink.

2 Responses to A Princess in Wedgwood