Posted on September 24, 2013 by Wedgwood in Seattle History 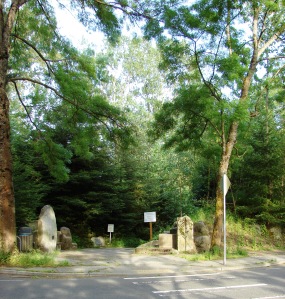 The entrance to Meadowbrook Pond is on 35th Ave NE at about NE 107th Street.

Meadowbrook Pond is located on 35th Ave NE at about NE 107th Street, its entrance framed by the flame ash street trees which line the arterial.  The pond is part of a low-lying flat area called the Confluence because the North and South Branches of Thornton Creek combine just upstream of the pond.  At the Confluence there is high groundwater and periodic flooding.  For that reason, Meadowbrook Pond was created for flood management and for filtering sediments in the water.  Flowing out of Meadowbrook Pond, the water continues to Matthews Beach and into Lake Washington.  Sediments, if carried downstream, would silt up the outlet of the creek at Matthews Beach and then the water would back up and cause flooding.  Filtering sediments out of the water at Meadowbrook Pond helps prevent flooding downstream.

The Thornton Creek system flows from Shoreline and northeast Seattle through eighteen miles of tributaries.  It was named for Washington Territory pioneer John Thornton who had a land claim at about N. 155th Street and Meridian Avenue North at the headwaters of the North Fork, though he didn’t live there. 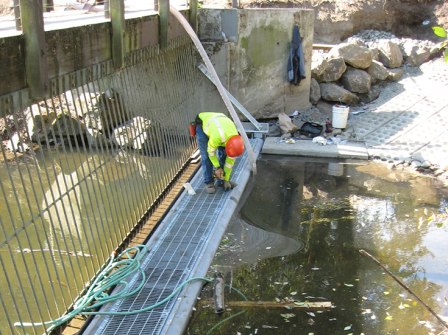 In the summer of 2013 a new maintenance walkway has been installed so that work crews can clear the trash rack (vertical bars) at Meadowbrook Pond. Photo courtesy of Seattle Public Utilities Pond Project Page.

Since its creation in 1996-98 Meadowbrook Pond has worked so well to collect and filter the water, that the pond has needed more frequent maintenance than originally planned.  The pond is currently in a three-year cycle of improvements.  Dredging was done in 2012 and in the summer of 2013 the pond was enlarged at its northwest corner to increase its capacity to hold water.  Other work done in summer 2013 was for improving access by maintenance crews.  For example, there is a trash rack (vertical structure to catch debris) and this year the walkway was improved for greater safety of access by crews who clear the trash rack.  Another improvement put in was paved access ramps for vacuum trucks which remove sediment from the pond. 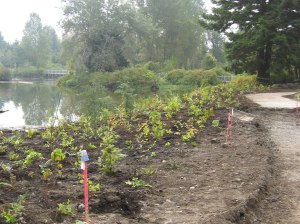 Landscaping with hundreds of trees and native plants will line the banks of Meadowbrook Pond where it has been enlarged at its northwest corner.

Landscaping work will continue into the months of October and November, which is the best time of year to plant trees.  More information is available on the Seattle Public Utilities page with update pages for Meadowbrook Pond and The Confluence.  The Confluence area and 35th Ave NE culvert improvements will be constructed in 2014, completing the three-year cycle of work. 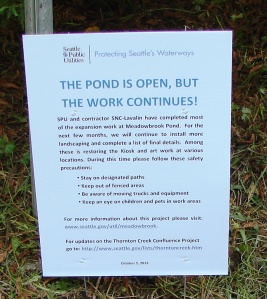 UPDATE:  Construction fencing was removed on Friday, October 4, 2013 and on that weekend many people enjoyed being able to stroll in the Pond grounds once again.  There is still a lot of work to be done in landscaping and tree-planting, and the area will look more “finished” as new ground cover and trees grow up in the spring.

IMPORTANT NOTICE:  A warning has been posted about dangerous levels of bacteria in the waters of the Thornton Creek Watershed.  Do not allow children to play in creek water or in the Meadowbrook Pond, and it is advised that dogs should not drink the water, either.  Scroll to the end of the report page to read the Microbial Trace Study of June 2013 by Dr. Jonathan Frodge.

Valarie is a volunteer writer of neighborhood history in Seattle.
View all posts by Wedgwood in Seattle History →
This entry was posted in Meadowbrook neighborhood and tagged Seattle Public Utilities, The Confluence, Thornton Creek Watershed. Bookmark the permalink.