In the early 1900s the Wedgwood neighborhood did not yet have a name and the area was quite rural.  The Morningside Heights plat from NE 90th to 95th Streets, 25th to 35th Avenues NE, was one of the early sections of Wedgwood to be divided up with lots for houses and promoted by a real estate company, and Morningside Heights attracted young couples who wanted to achieve the dream of having their own home.   Walter & Verda Wood were 25-year-old newlyweds when they built their new house in Morningside Heights in 1913.

On the census of 1900 twelve-year-old Walter S. Wood was listed as living with his parents in the city of Minneapolis, MN.   Walter’s birth date was August 14, 1887, so by the June 8, 1900, census date he was actually nearly thirteen years old.   Walter’s birthplace was listed as Minnesota, and his father and mother’s birthplaces were Wisconsin and Minnesota, respectively.   Walter’s parent’s names were Lucien Edgar Wood, age 34, and Frances E. Wood, age 35.   They were listed as having been married only eleven years and Lucien had been born in Mississippi.   From this information we conclude that Lucien was Walter’s stepfather, and he had given Walter his surname of Wood.

Other pieces of information on the census of 1900 were that Walter had no siblings, and Lucien worked as an agent for a coffee company.   On the censuses of later years, Walter listed that his father was born in Wisconsin, indicating that he knew Lucien was not his birth father.   By the census of 1920, Lucien Wood was living in Santa Fe, New Mexico, working as a telegraph operator, and he listed himself as a single man.   Frances Wood, on the census of 1920, listed herself as married but she was living in Minnesota with her mother and younger sister.   Lucien & Frances Wood seemed to have different ideas about whether they were still married or not.   We can speculate on the effect that Walter’s family background and upbringing had on him.   We don’t know how or why Walter chose to come out to Seattle as a young adult, but it seems that he wanted to start a new life and make something of himself.   He may have had a strong inner drive to “be somebody” and prove that he could rise above his limited background.

The first definite listings for Walter S. Wood in Seattle are found on the census and in the Seattle city directory for the year 1910.   Walter, age 22, was living in a boarding house on Union Street at the corner of 7th Avenue.   His occupation was clerk at the Seattle Car Manufacturing Company office, located in the Alaska Building at 2nd & Cherry.   William Pigott was president of the company, which was the forerunner of today’s PACCAR.   Known today as a truck manufacturer, in the early years the company made rail cars at a factory in Renton.   Walter Wood worked in their business office in downtown Seattle.

From Walter Wood’s occupational and residential listings in his first few years in Seattle, there is no clear indication of how he might have met his future wife, Verda Bloom.   Verda was living in the University District and attending the UW; Walter lived and worked downtown.   Verda was from a stable two-parent family whose members continue to live near one another and keep in touch for many years; Walter came to Seattle as a young man alone, without a support system, having to make his own way in the world. 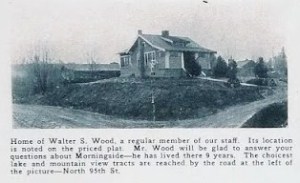 Wlater Wood’s house was built in 1913, probably the first in the Morningside Heights development, and was featured in a 1920s real estate brochure.

Walter Wood’s occupational listings in the Seattle city directory showed frequent job changes.   Perhaps Verda’s parents thought Walter was an ambitious young man who was climbing the ladder of success, and that he had the potential to provide well for their daughter.   Walter & Verda were both 24 years old when they married on April 13, 1912.   For the first year of their marriage they lived with Verda’s parents on 4th Ave NE in Wallingford.   The next year, 1913, Walter & Verda moved into their own home at 9428 25th Ave NE in Morningside Heights.

How was it possible for a young couple like Walter & Verda Wood, newly married and without a high income, to afford to buy a house?   In The Seattle Bungalow: People and Houses 1900-1940 by Janet Ore, the author explained the method of financing called a land contract or contract for deed.   Buying houses “on time” had not been done until the decades of the 1910s and 1920s, which helped fuel the expansion of housing in northeast Seattle. 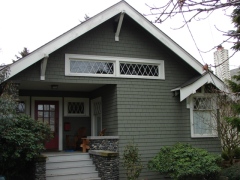 This house is a distinctive Craftsman bungalow constructed by Jud Yoho, with many of its original elements intact. Located at 617 N 47th Street in Fremont, the house was built in 1910 as the home of a real estate agent. Photo taken by Valarie, March 2009, as part of a survey of historic housing in Fremont.

One of the leaders in this “home financing revolution” and in the design of affordable housing was Jud Yoho.   In Seattle, beginning in 1912, he published Bungalow Magazine.   Each monthly edition of the magazine included a set of house plans with material lists, ready to be given to a contractor to build the house according to specifications.   The origin of the term “Craftsman bungalow” comes from the idea that the houses were hand-crafted by artisans such as carpenters, cabinetmakers, and stoneworkers.   “Bungalow” refers to a small house which measured from one to one-and-one-half stories high, and which typically had a wide roofline and deep overhanging eaves.   A Craftsman house usually had a wide front porch and substantial columns, sometimes of stone, to support the porch roof.

It is possible that Walter & Verda Wood might even have met Jud Yoho during the year that the Woods lived at 4757 4th Ave NE in Wallingford.   Jud Yoho lived three blocks away, in the 4700 block of 2nd Ave NE.   He used his own two houses there, 4754 and 4718, as show models and featured them in his Bungalow Magazine and in the Craftsman Bungalow plan book which he sold.   Perhaps Walter & Verda, as newlyweds out on an evening stroll, had walked past Jud Yoho’s model homes and dreamed about having their own Craftsman bungalow.   Very soon the Woods were able to achieve that dream by moving to the low-cost outside-of-Seattle area of Morningside Heights in what is now Wedgwood.

Whether or not the Wood’s house was based on a Jud Yoho plan book design, the Woods would have had plenty of other sources of house plans in the period.   The success of Jud Yoho in Seattle caused a number of other local architects to produce their own plan books.   Real estate companies, too, began to compete by offering free sets of house plans.   Burwell & Morford Inc., developers of Morningside Heights, created a brochure which offered financing (time payments) and a free set of house plans to each buyer of lots.

When Walter and Verda Wood moved into their new house at 9428 25th Ave NE in 1913, they were among the first families to live in the Morningside Heights plat.  Later in that decade Walter became a real estate agent working for the company which was promoting Morningside Heights.  His name is noted on the Morningside Heights advertising brochure of 1923 with his house location marked.  Inquirers were encouraged to stop by and ask him about the wonderful life to be lived in Morningside.   The Wood’s “prize chickens” were even featured in a photo in the above real estate brochure.   What is not stated, however, is that it was probably Walter’s wife Verda who worked at home industries such as keeping the garden and raising the chickens.   She would have been the one to greet drop-in visitors to Morningside Heights, if Walter was away at work at the real estate office in downtown Seattle.

By the 1920s, in addition to being a real estate agent for the Morningside Heights plat, Walter Wood was working in his own businesses.   Victory Way (now called Lake City Way) had recently been put through, and Walter saw an opportunity to open a gas station and store at the intersection of NE 95th Street (present site of Wesco Autobody Supply.)   As Walter & Verda’s house address was 9428 25th Ave NE, Walter gave his store the same number, 9428 Victory Way.

Our thanks to a descendant of the Bloom family (related to the Woods) for this photo of a key case from Walter Wood’s business.

The period of the 1920s was a relatively prosperous one in Seattle, with more and more people acquiring cars and buying their own homes, continuing the contract purchase movement which had begun a decade earlier.   Based on the upward economic trends of the 1920’s, Walter Wood built a gas station and grocery store along Victory Way in the assumption that car use would only increase.   He also engaged in speculative real estate investment and house-building since he thought that more and more people would be likely to move to the Morningside Heights area.

In 1926 Walter Wood added one more sideline: he was elected local Justice of the Peace of Morningside Precinct.   Morningside Heights was outside the Seattle city limits and had the court of the Justice of the Peace under King County, authorized to hear misdemeanor cases and other petty criminal infractions.   A Justice of the Peace was not required to have a formal legal education.   In the election Walter ran against John Matthews, an attorney who was the son of Mr. Matthews of Matthew’s Beach.  It was an indicator of Walter Wood’s status and acceptance in the neighborhood that he won the election.

At the end of the 1920s Walter Wood, spurred on by his inner drive to “be somebody,” seemed to be well-established in Morningside Heights with several businesses and with a position as Justice of the Peace which commanded respect in the community.  But in 1932 Walter Wood’s career would crash and break apart in a collision with the twin boulders of the 1930s:  Prohibition and the Great Depression.   My next blog post will continue the story of Walter Wood in Morningside.   See: Morningside Heights in Wedgwood: Prohibition, the Great Depression and Walter S. Wood.